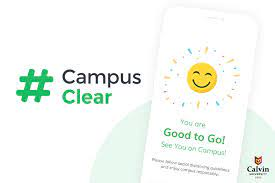 In a recent Safe Return Update email to the student body, Sarah Visser, Vice President of Student Life, stated that student senators will begin providing “weekly incentives and drawings for cool prizes like airpods or Calvin boldSocks” for students reporting on CampusClear daily. According to Visser, “well over half of campus” is doing, but Calvin is still in the process of trying to raise the student number.

Matt Jeltema, associate chief information officer at CIT, said, “The hope is to have everyone reporting, every day… we’re not there yet.”

Although the number of people who report each day have stayed largely consistent since the beginning of the school year, efforts are being made to increase those numbers. This includes sending emails to the student body to demonstrate the ease of filling out the app, asking professors to have students display CampusClear at the beginning of class, and offering the prizes mentioned earlier.

In the interview, Jeltema requested that students be made aware that the CIT desk is there for students with any difficulty in the app. “If people are having any trouble, the CIT help desk is ready and happy to help with that. We haven’t had any problems that we haven’t been able to solve yet.”

Chimes talked to about 30 students around campus to get an on-the-ground idea of how many students are filling out CampusClear. Among those students, about three-fourths filled out the app three to four times per week or more. Of those who filled it out, though, only a fourth said they used a thermometer every time they filled out the app. Some students also expressed forgetting to fill it out until they were in class or on the way home.

In an email to Student News, Matthew Kucinski, assistant director of media relations, described what happens when symptoms are reported to CampusClear.

If only one minor symptom is reported, students are asked to learn remotely and isolate for one day to see if symptoms clear up. If they do, they can return to campus. If several symptoms or crucial symptoms –“fever, shortness of breath, cough, or loss of sense of taste or smell”– are reported, students will get tested for COVID-19 and isolate until test results come back negative.

Visser ended her email by encouraging students to remain optimistic and reminding them that following Calvin’s guidelines is the best way to continue “in-person living and learning.”