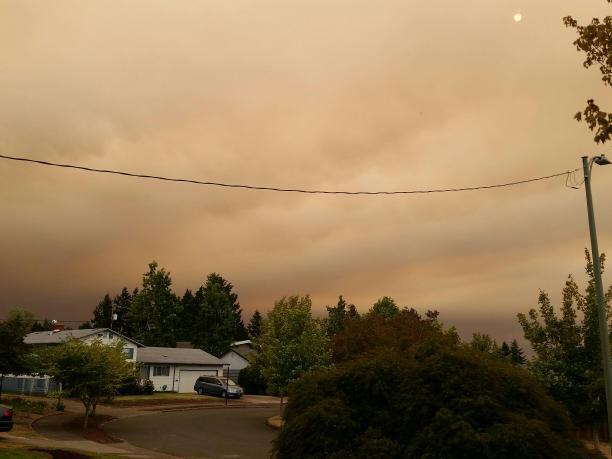 The sky over Calvin grew hazy with smoke from West Coast wildfires on Sunday. For students from California, Oregon, and Washington, it was a grim reminder of what their families were facing at home: a record-breaking season of wildfires in addition to the global pandemic.

“I feel the loss of the people in my community” senior Carly Eastham told Chimes in an email. “Some places I loved going to growing up are somewhere between charred and completely lost.”

Eastham’s family and friends have been updating her about the surreal conditions they are facing in Modesto, California.

“My mom wakes up every morning and has to wipe off a thick, black layer of ash that has come to rest on her windshield overnight. My family as well as my friends have been telling me of hellish conditions there with the reddened sky and ash falling to the ground like snow,” Eastham shared. She recently received a Snapchat from a friend who was excited to see blue sky for the first time in weeks.

Brenna Lubbers, a Calvin student from Mt. Vernon, Washington, described the wildfires on the heels of the pandemic as “hit after hit.” Her mom works at a local hospital, and Brenna remembers the stress of being on campus last spring while Seattle was a COVID hotspot. Now, the local hospitals are seeing patients who are negatively impacted by both the virus and the smoke. “It’s concerning to have all this chaos happen at once and not be home for it,” Lubbers said. In the five years the Lubbers family has lived in Washington state, they have never seen a fire season as severe as this one.

While the blazes haven’t reached Portland, Oregon, where Haley Parks’ family lives, her friends in rural areas have been hit hard. She shared their stories in an email with Chimes, saying: “One friend’s family didn’t have a horse trailer with them when it came time for them to evacuate, so they simply had to leave the gate open and pray that their horse would be found and returned once it was safe to go home.  Another friend’s dad was at work when the evacuation order came for his county, so he was unable to go home to grab even the essentials.”

Junior Madelyn Vander Veen is also from Portland. Her parents keep her updated on the conditions at home, where skies have turned gray-orange.

In California, a co-worker of Eastham’s mother isn’t sure if his house is still standing. “Stories like this are all over the place,” said Eastham.

Wildfires happen every year in America’s dry west, but the blazes of 2020 have broken records for their size and destruction. According to the New York Times, more than three million acres in California alone have burned. Ash and smoke have caused poor air quality along the coast, and high winds transported smoke across the country. In some places on the coast, smoke has turned the sky dark red.

Regarding how her Calvin peers have responded to the inferno on the West Coast, Lubbers said that there “needs to be more awareness” and expressed a hope that more people who live in the Midwest would care about this issue even though it doesn’t directly impact them.