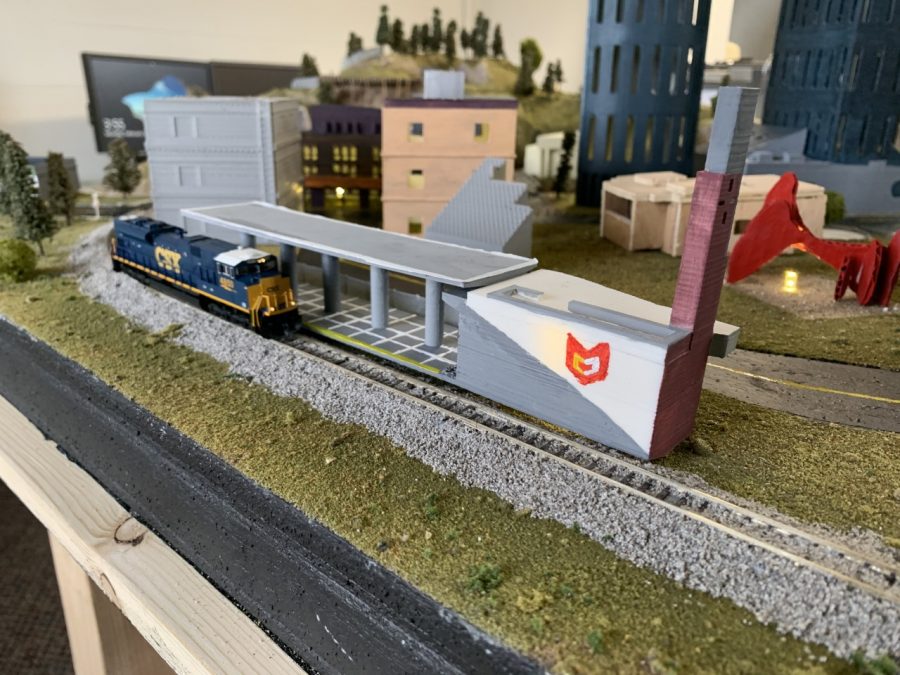 The train pulls into the station while the Calder sculpture frames the background.

Most Calvin students are well aware of the presence of the iconic “Cheese” sculpture on campus. They might not know, however, that a second Cheese exists on campus, 3D printed to be 1/160th of the size of the original and tucked into an extensive model railroad system designed and produced by Calvin students over the last eight months.

Bryce Bundens, a junior civil engineering major, came up with the idea for the model railroad and serves as project manager. “I was wanting to do something with my extra time and I figured, something I’ve always loved doing is making model railroads and scenery dioramas,” said Bundens.

The model boasts 37 buildings and numerous sites from Calvin’s campus and the Grand Rapids area. Hannah Vincent, a junior civil engineering major serving as the Lead for Building Design, took photographs of several buildings and used those images, along with Google Maps, to create accurate N scale (1:160) representations of the buildings.

Viewers can spot sites from around Grand Rapids — including the Blue Bridge, John Ball Zoo, Rosa Parks Circle, the Grand Rapids Art Museum, the Marriott and the Calder sculpture — as well as Calvin landmarks such as the CFAC, Science Building and East Beltline Overpass. A small model of Hobby Recycling, the model train store where the students obtained many materials for the project, appears as a thank-you.

The buildings for the model were 3D printed, some using Calvin’s 3D printers but most using individual students’ 3D printers. Printing the buildings was an arduous process. “When we say we need to watch the 3D buildings print, it’s not like you’re printing your papers or anything,” said Simon Detmer, a junior geology and biology major. “I think the quickest actual building piece we printed took about four hours.”

Because of its size and level of detail, the  DeVries Hall-Science Building-North Hall complex took the longest out of the buildings on campus to print: about two and a half days.

The work was worth it, though, and it is part of the reason why the project is so unique, according to junior mechanical engineering major Adam Tjoelker. “People who know how to 3D print and CAD (Computer-Aided Design) don’t necessarily make models, and I think we bring an interesting skill set as engineers. We can bring these two disciplines together and really do something really cool and new that I think hasn’t been done very much,” said Tjoelker, who served as the Lead for Table Design.

The train runs on a track and electric system designed by sophomore Ben Bruxvoort. About 55 individually-wired LEDs light the buildings in the model, and bodies of water appear with stunning realism thanks to an elaborate resin pour designed by sophomore mechanical engineering major Aidan Bakker. “It’s rock-hard resin but it appears like water,” said Bakker, who was responsible for much of the diorama’s scenery design.

Braden Weber and Jojo Essuman helped with the 3D printing for the project.

The project combined students with similar interests but markedly different skills sets. “All of us were working on different aspects of it and collaborating, so it was really cool to see how the different things that we were doing worked together to form the whole of it,” said Vincent.

Brent Williams, director of exhibitions, helped the group secure funding for the project. Much of the funding came from Calvin’s Art Gallery and Art Department. Many students from the group also contributed in the form of time and resources.

“I think [the project is] a great example of liberal arts and this idea that we can take our hard sciences and kind of creatively approach them and utilize those skills in exciting and creative ways,” said Williams.

The model is currently being held in storage at the Center Art Gallery, but the group hopes to see it displayed on campus sometime in the near future. The model will likely end up near the admissions office in the Spoelhof University Center or the Prince Conference Center as a fun lobby exhibit, according to Williams.

Wherever it finds a permanent home, the model is intended to add excitement and fun to campus. As Bundens said, “It’s just for fun! People can just turn on the switch and be happy.”