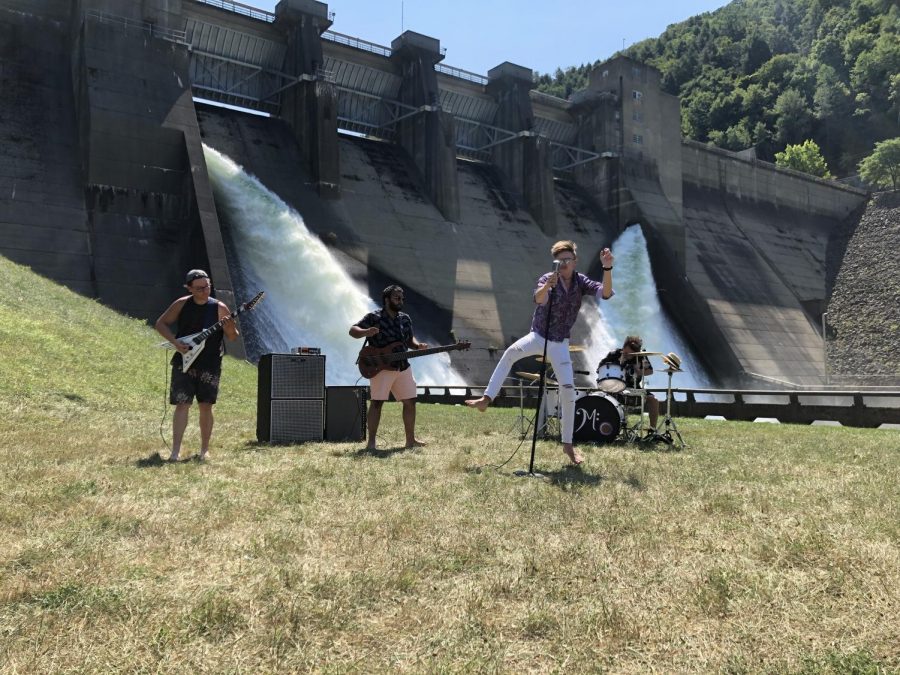 Mannhattan was able to experiment with music during the pandemic.

Mannhattan, a band comprised of Calvin graduates, recently traveled to Pennsylvania to work on their latest album during COVID-19. Mark Townsend, the A&R representative of Prodigious Productions, sat down with Chimes to talk about the band’s music making process during COVID-19 and what’s coming next for the group.

The band struggled with COVID-19’s effect on their performance schedule, release dates, and their creative process. The group had planned on finishing recording of their new album by the end of June, but, as Townsend said, , “with COVID, when you suddenly can’t be in the same room as one another, you can’t write music together. So everything just stopped.”

The group struggled with the distance, as well as some of the bandmates being essential workers. Sam Mann, the frontman, worked at Blodgett hospital during the height of the pandemic, and with other band members working full-time as well, it was difficult to find time to record. The multiple summer gigs that they had planned were cancelled. Townsend said,  “I can’t imagine for these guys who have played together every week for years what it was like suddenly to just have to stay inside.”

To combat this separation, bandmates recorded and posted covers of popular songs to the band instagram daily during shutdown. This also gave the band members a chance to experiment with different instruments and their roles in the band. For example, drummer Royce Lloyd sang vocals on a cover of “Lookers” by The Menzingers, which can be found on the band’s Facebook page. These explorations have continued on the album, with bandmates playing multiple roles, broadening their horizons.

The group finally decided to meet up in Pennsylvania to work on their new album. All of them isolated and monitored their health, then drove up to work together for a few weeks. Those weeks were creatively fruitful, Townsend said . The group wrote and recorded song after song collaboratively, experimenting with different sounds and techniques.

“If you’ve ever heard a song where you think ‘Wow, that was kind of weird, how did they come up with that?’ It comes out of stuff like this,” Townsend explained.  One of these experiments was to record a song in a shower. “You know how everybody thinks they sing great in the shower? We decided for one of the songs to put a microphone in our bathroom, and we had Sam sing in the shower, to get this great sound.” There were bursts of inspiration during these few weeks–lyrics hurriedly written down on a golf scorecard were soon joined by strings, piano, percussion, and a guitar lick. “It went from this one little idea and exploded,” described Townsend .

Mannhattan also has allowed their experience of COVID-19 to influence and inspire the themes of their music. Originally, the album was going to be about human impact on the environment, but the tone has changed, Townsend explained. “We live in a very different world now than we did when they had that idea last year. There’s still going to be a lot of fun and rock, but one of the songs is going to be about the healthcare system in the US.”

Townsend excitedly explained how this album will be a step up from what Mannhattan has released before: “As musicians, both instrumentally and lyrically, they’ve grown a lot, which is really cool to see.” With a smile on his face, Townsend concluded, “I have the best job ever: I get to just watch them do their thing, and I enjoy every second of it.” Mannhattan will be performing at Fatmans on October 5 in Gurney, Illinois. You can support the band buy buying their merch at www.mannhattanofficial.com