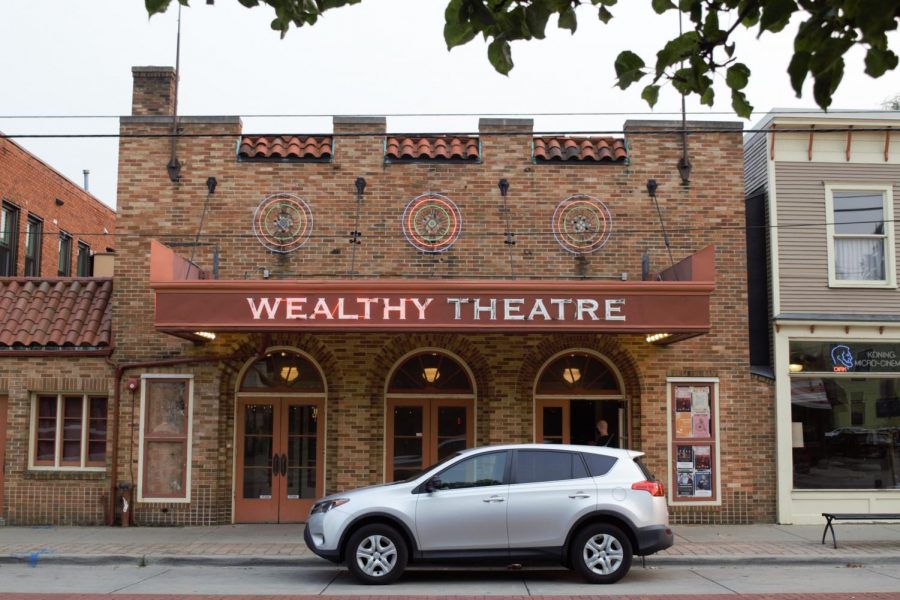 Wealthy Theatre was originally built in 1911 but was opened as it stands today in 1998.

Celebration Cinema permanently closed their movie theatre at Woodland Mall early this May. The theatre had shown films that had already ended their runs at Celebration’s other locations, as well as some indie and foreign films. Celebration made the decision to close the location because the lease was expiring and it was not a good financial investment to renew the lease; the theatre was in the red for many years, MLive reported.

Though Celebration’s decision to shut down their Woodland location was not directly related to COVID-19, the current pandemic has forced many smaller theatres to make tough decisions. The Urban Institute for Contemporary Arts (UICA), operated by the Kendall College of Art and Design of Ferris State University, closed down temporarily due to pandemic back in March. They plan to reopen in spring 2021, when they will be moving into the Woodbridge N. Ferris Building on the Kendall campus.

In a press release, executive director Miranda Krajniak stated, “We believe a smaller footprint and associated expenses will allow UICA a more stable foundation going forward.” Though the institute still plans to incorporate film into their programming, associate director Megan Bylsma explained that they “will not have a formal theater and that [film] equipment in [their] new space.”

Amid these difficult and strange times, one local theatre has found ways to continue their service to the community. Wealthy Theatre, located, aptly, on Wealthy Street in Eastown, closed at the beginning of the COVID-19 shutdowns. Sarah Nawrocki explained, “The hard truth of this pandemic from a venue perspective is that we were the first to close and will be the last to reopen.” The physical theatre was completely shut down for a few months, but their leadership team worked to create ways to engage with the community virtually, and by April they had several events on the roster.

Wealthy Theatre was originally built in 1911 but was opened as it stands today in 1998. Wealthy has offered a variety of events in the past, including live theatre, improv, concerts and film screenings. With the shutdown, they have pivoted their programming to be mostly online. On Tuesdays at 8:00 p.m. Wealthy hosts Netflix Watch Parties, and Wednesdays at 6:00 p.m. they stream their “WYCE at Wealthy” concert series. On Oct. 1, 2, and 3, they will be partnering with Circle Theatre in holding an outdoor screening of the cult-classic Rocky Horror Picture Show, with concessions and prop bags readily available.

There are obviously downsides to holding solely virtual programming. Nawrocki said, “It’s hard to be so disconnected from in-person interactions, as that is the very heart and soul of our work.” Wealthy Theatre is a staple of the local community and a venue for people to share their talent. The theatre prides itself in being “the platform, the soapbox, the stepping stone for free speech and expression in our community,” but there’s only so much you can do virtually.

However, as Nawrocki explained, the circumstances of the pandemic have also led to opportunities the theatre otherwise may not have had. “Thanks to Virginia Anzengruber, founder of Screen Club, we were able to host a live virtual discussion on the FX series What We Do in the Shadows, where she was able to bring in Harvey Guillén, one of the stars of the show who is now an Emmy nominated actor.”

Prior to COVID, such an event would have been too costly for the theatre, as they would need to fly Guillén out and arrange lodging, but since the event was virtual the actor was able to simply get on his laptop at home.

Wealthy Theatre is a non-profit theatre, but there are operating costs, and they depend on the support of the community to offset these costs. According to Nawrocki, “[the theatre] will be holding a fundraiser from September 21-25, striving to raise $25,000 this fall. … Every dollar helps. And even if monetary help is not feasible at this time, help us by sharing our fundraiser posts, and encouraging your friends and family to support this integral part of our community.”

Wealthy Theatre is a proud service of Grand Rapids Community Media Center, a 501c3 nonprofit organization. Donations for Wealthy Theatre can be made at: wealthytheatre.org/donate. For more information on GRCMC, visit grcmc.org.