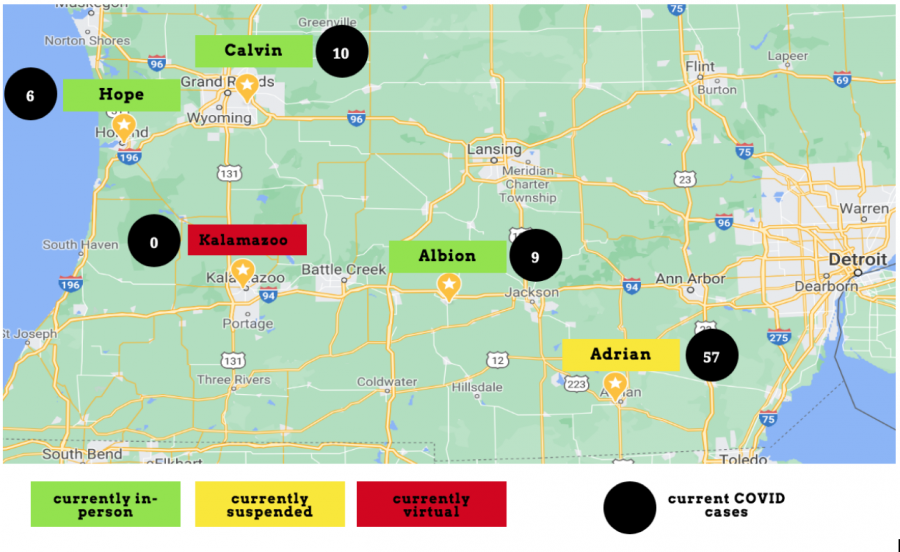 This map shows the COVID case count at small colleges throughout West and East Michigan.

Michigan colleges had reported more than 1,000 confirmed cases of COVID-19 as of Sept. 8. Currently, just 11 of those are active cases on Calvin’s campus. Our closest neighbor, Hope College, likewise reported just eleven recent positive tests. 140 miles southeast, however, Adrian College has been teetering on the brink of closure since the school year started.

Hope students have been vocal champions for being cautious in hopes of protecting both Hope’s own campus and the larger Holland community.  Anchor editor Claire Buck said, “ I have heard students express their strong disapproval of peers who choose to party, especially since there have been rumors that those parties are unofficially connected to Greek organizations.”

Buck also said self-policing is happening primarily within living groups and that “people who are annoyed about restrictions are mostly keeping that to themselves.” One freshman summed up the general sentiment in an Anchor letter to the editor, noting, “It is good to be back, but it would be so much better to stay.”

In addition to baseline testing at move-in day, Hope is practicing surveillance testing, with 1% of the total campus population tested every weekday. Drs. Best, Krueger, and Pikaart of Hope’s Natural and Applied Sciences Division are running ongoing wastewater surveillance testing to help trace virus presence to specific residence areas. Classes began on Aug. 17, and case data has been released on a weekly basis since then. Hope’s sports teams are practicing but not playing.

Adrian College is another small liberal arts school, with a student body about half the size of Calvin’s. Like Calvin, Adrian partnered with HELIX Diagnostics to provide baseline testing upon arrival, but there the trajectories diverged: At Adrian, baseline testing revealed that 6% of the population―more than 150 people―already had the virus on Aug. 31. By Sept. 3, 8.9% were infected. Students expressed concern that the school’s isolation procedure was inadequate or possibly not being well enforced, which may have contributed to the rapid spread.

In response to this outbreak, which reached 10% of the population (227 cases) by Sept. 8,  Lenawee County Health Department issued an emergency order in place, calling for Adrian and others to ensure adequate isolation practice, enforce social distancing and face covering recommendations and suspend all sports, indoor dining, common areas, fitness centers and in-person classes for a two-week period. Adrian is now complying with the Health Department’s request to temporarily suspend in-person instruction, and the case total was down to 57 as of Sept. 10. In a Sept. 10 interview with MLive, President Jeffrey Docking said he believes they are “flattening the curve” on campus.

Adrian freshman Cheyenne Muse said, “A lot of the students are telling each other to follow the rules and keep their masks on because no one wants to be sent home or remain online for the entire year.” She also said she believes Adrian’s administration is doing all that they can, but said, “It’s kind of ridiculous that we are still having sports teams and practices, and even scrimmages. That seems to be where a lot of the cases are spreading from.”

Earlier this summer in a live Q&A, Calvin University President Michael LeRoy suggested two possible scenarios in which Calvin would suspend in-person instruction: either if the Health Department ordered the suspension of in-person instruction or if an outbreak on campus became somehow unmanageable. Many students are wondering what the magic number of cases is at which Calvin would begin to consider returning to fully virtual instruction, but as is evidenced in the case of Adrian College, speed of spread and percentage infected may be just as influential in that kind of decision as total number of cases is, and suspension recommendations are likely to come from the local Health Department, not necessarily from the university’s administration.