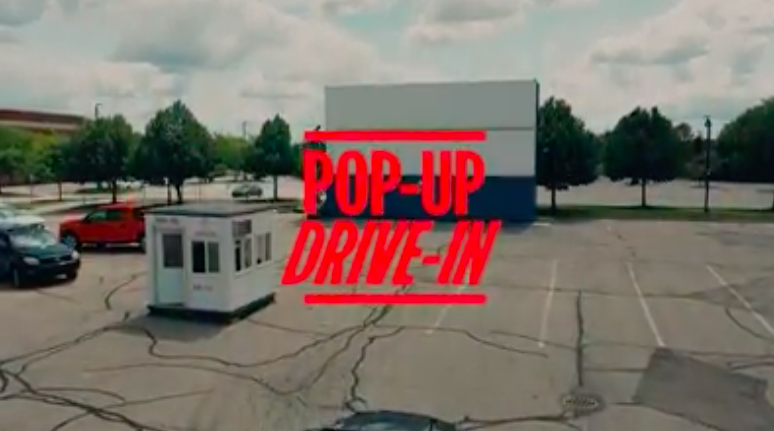 With theatres across the country shut down amid the current pandemic, many are yearning to go back to the movies. Although theaters in some states have begun reopening, if you would like to see a film on the big screen in Grand Rapids, you could consider Celebration Cinema’s newly-established “pop-up drive-in.”Though Celebration also runs a drive-in in Muskegon, as well as one in Lansing, the Grand Rapids drive-in is located in the parking lot behind

Celebration North, 2121 Celebration Dr. NE. If you have never been to a drive-in, the process is fairly simple. Guests are encouraged to buy tickets online ahead of time to expedite the entry process and minimize contact. If you choose to buy tickets “at the door,” cash is not accepted, so make sure you bring your debit or credit card.

When you arrive at the theater, there are signs directing you to the back of the parking lot where the projection screen is set up. You drive up to the lot and there is an attendant waiting to verify your ticket. When you enter the “theater”–a large section of the parking lot which has been fenced off–the parking spots are first come, first serve. You can also bring chairs if you would like to sit outside of your car, so long as you maintain proper social distancing of six feet away from other guests.

Guests are discouraged from bringing outside food into the drive-in, but the lobby is open for concessions and for patrons to use the restroom.

While the screen is not as visible as in an indoor theater, the quality is surprisingly good. The stars lower the contrast a fair amount, but the screen is still visible enough to catch the action. Like most drive-ins, the audio of the film is played via radio.

Tickets are $30 per car, so it is a good idea to bring a friend in your pod. Additionally, most screenings at the drive-in are double features. You are welcome to leave during the ten-minute intermission between screenings, but re-entry is not permitted.

Just like at a traditional movie theater, there are problems with “theater etiquette”. At the screening I attended, brake lights occasionally illuminated the screen with a red glow, and at one point a car’s lights began flashing as its alarm was triggered. Still, the experience was better than watching a film from a couch or on a laptop, and far safer than attending an indoor screening.

Screenings start at dusk (around 9:00 p.m.), but doors open at 8:00 p.m. if you would like to come early. According to Celebration Cinema’s website, the screenings take place regardless of weather. If you’d like to check out the drive-in for yourself, showtimes are listed at celebrationcinema.com.