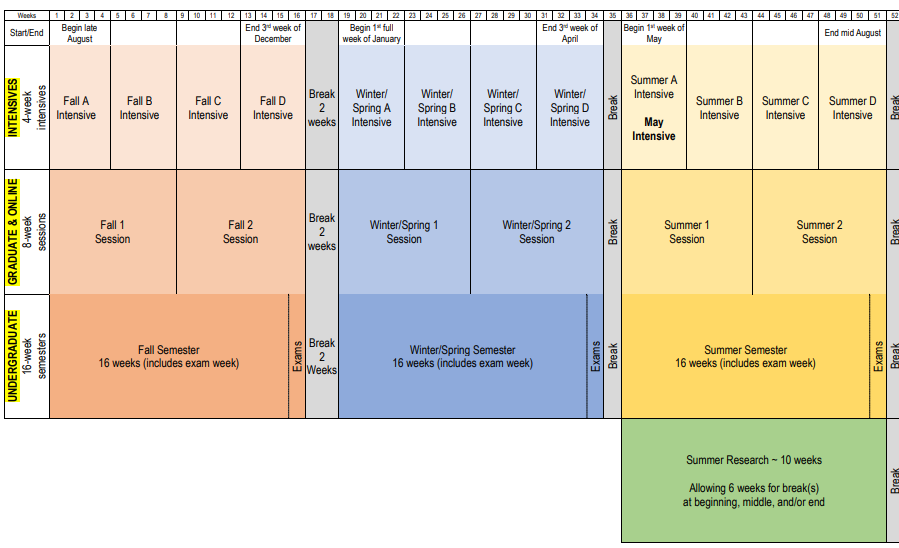 A draft of the planned scheduling changes, copied from the provost's email.

Interim will be replaced by a “May intensive,” and two eight-week intensives have been added to each semester, Calvin Provost Cheryl Brandsen announced in an email to faculty and staff Friday.

Ending January interim means the spring semester will begin and end earlier. A conceptual draft included in the announcement lists the first full week of January and the third week of April as possible start and end dates.

The planned eight-week intensives will be online courses through Calvin’s partnership with Wiley Educational Services and will be offered year-round, part of Calvin’s efforts to reach non-traditional learners, the provost said.

“These courses are designed primarily for graduate programs and non-traditional learners, although an aligned calendar for the university will enable students and faculty, particularly in the summer semester, to participate in both without overlapping semesters in their learning/teaching,” said Brandsen in the email.

These plans have been in the works for months, with initial announcements in February that interim could move to May and a removal of interim requirements in April.

Faculty Senate agendas in February estimated that changes could create additional revenue of $1.3-1.5 million a year.

An attached document listed a variety of reasons for the changes, including making Calvin’s cost per credit similar to other institutions, reaching new learners, and offering students longer summer employment opportunities.

Additionally, undergraduate students entering Calvin may begin in the summer, winter, or fall, and graduate students have the opportunity to start their education roughly every eight weeks.

This is a developing story, and Chimes will continue to cover it as new information is available.