The return: Calvin comes back to campus 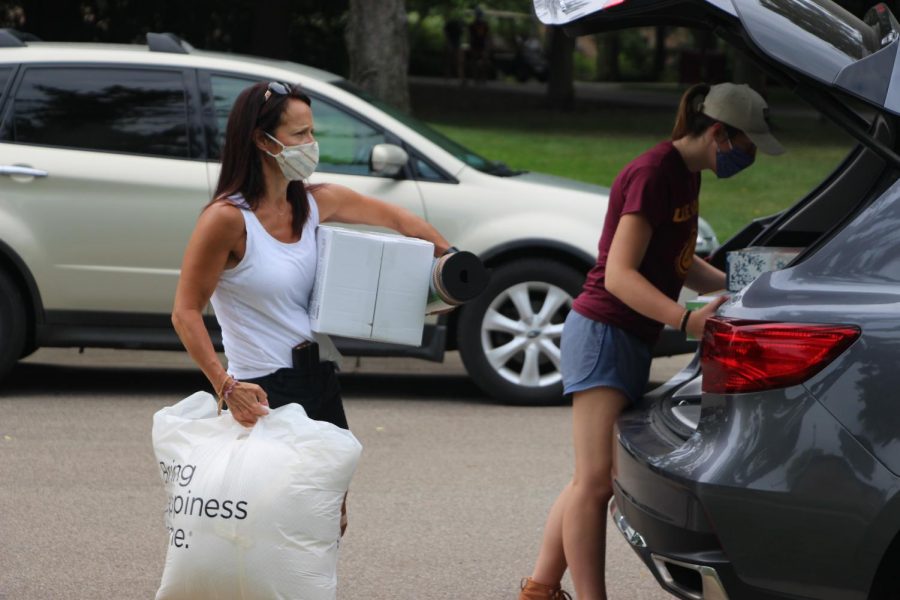 Students adjust to new rules as they move back in.

Six months after going online for the spring semester because of the COVID-19 pandemic, Calvin has returned to in-person instruction.

After conducting 3,809 tests as of Aug. 31, only twelve cases have been identified as positive, a .3% positivity rate. Of those twelve, currently only four of those cases are active; the rest have since recovered. All four active cases are off-campus and in isolation. Three of the cases are students; one is an employee. The COVID-19 dashboard on Calvin’s website has the most up-to-date information on case counts.

Before students moved into dorms, they had to reserve their move-in time, using a program developed by the Center for Social Research, according to Dean of Students John Witte. Additionally, roommates could not sleep in the same room until both had received negative test results.

This fall will look different from semesters past in more ways than just the move-in. Students are required to wear masks at all times indoors and in congested outdoor spaces, as well as register their symptoms daily on the Campus Clear app. Sports seasons are largely cancelled. On-campus residents are restricted not just to their dorms but also to their floors. The dining halls no longer have any self-serve options, and most seating is outside.

Classes are hybridized, taking place both online and in person, and many have been moved to unusual locations on campus, such as dorm basements, the Prince Conference Center and even outside. Senior Grace Jang is taking her Engineering 333 course in the Kalsbeek-Huizenga-van Reken basement, which she had never visited as an on-campus resident.

Despite these changes, students report being happy to be back on campus. Emily Jipping, a sophomore, said, “I’m definitely ready to be back even if it looks different. Being around people is much better than not.”

Likewise, Junior Ben Van Haitsma was excited to be back and see his fellow students again but had doubts about the semester ahead. “I’m not super optimistic of how long it will last. [The administration is] doing everything they can, but I’m not sure it’s going to be enough. It’s just going to be too difficult to get everyone to follow the rules,” Van Haitsma said.

Jang also expressed concerns that students were not wearing masks while playing sports near the Knollcrest-East apartments but thought that Calvin was more prepared than most American universities.

After the spread of COVID-19 forced schools like Michigan State University, University of North Carolina-Chapel Hill and the University of Notre Dame to delay classes or move back online, students and administrators alike know that remaining in person until Thanksgiving is a challenge. However, multiple administrators told Chimes that they think Calvin is different from these institutions in important ways.

Calvin’s small size puts it in a better spot to navigate the fall, the president said. “It’s our sense that we’re smaller; we’re a community where we know each other better; we’re a community that has some shared values, a shared mission,” Le Roy said. “I’m not naïve enough to think that means we’re not going to have problems, but we also have a really rigorous system of testing, tracing and investigation now.”

“[The administration is] approaching it with humility, but we believe in what we’ve put together,” Vice President of People, Strategy and Technology Todd Hubers said.

Additionally, the administration has taken steps to deter off-campus partying, a major cause of spread at other schools. According to Vice President of Student Life Sarah Visser, Calvin has told neighbors of off-campus students, as well as the Grand Rapids Police Department, to report if they see large student gatherings. In an email to students, Visser wrote, “Plainly stated, hosting or attending gatherings and parties where social distancing is not possible and masks are not worn represent violations of the Calvin University code of conduct; if you don’t abide by these rules, you forfeit your right to study on campus and will face disciplinary action.”

Calvin administrators and faculty are planning for cases and have reserved the Rooks-Van Dellen residence hall as an isolation space for students. According to Visser, no live-in professionals will be in RVD, but there will be a “web of care” surrounding students who need to live in isolation, which includes care packages and academic support.

Le Roy stressed the fall will require adaptability and dedication, as well as compassion for infected students. “This is a very infectious disease, and there will be students who do everything right, and they’re pumping gas right after somebody who pumped gas [and had COVID-19] and they get infected,” Le Roy said.

Visser, Le Roy and others appreciated large scale student cooperation with the new requirements. “I‘ve been so impressed with how students have been behaving frankly. I’ve walked around campus every day the last week or so,” Le Roy said. “I’ve been really impressed with how seriously they’re taking it and how careful they’re being.”