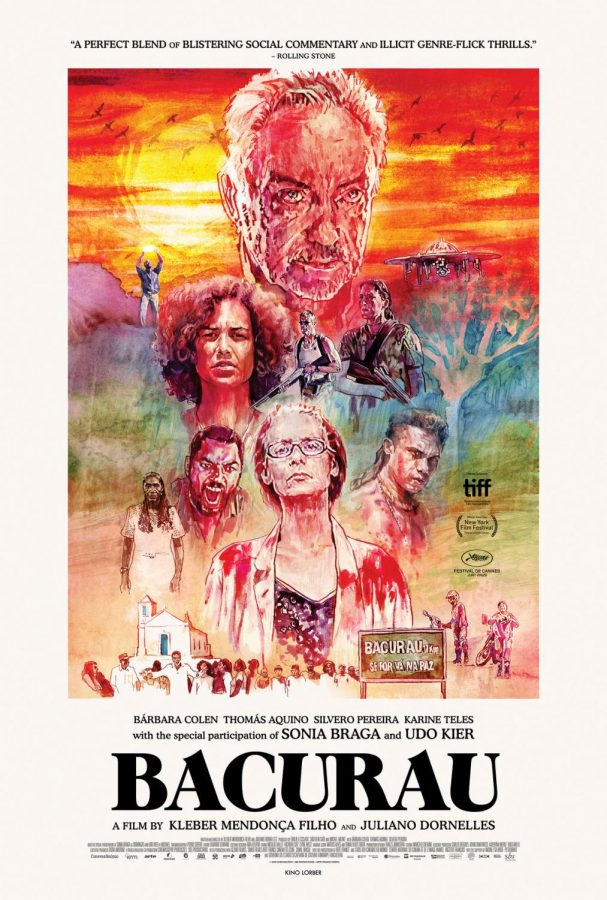 “Bacurau,” written and directed by Brazilian filmmakers Kleber Mendonça Filho and Juliano Dornelles, is no doubt a political effort, following the path set by Mendonça Filho’s previous works such as “Aquarius” and “Neighbouring Sounds.”

With the election of current president Jair Bolsonaro, the political atmosphere in Brazil has become less supportive of art as a means of boosting the economy, something that often leads to the death of film industries in other countries. In “Bacurau,” Kleber Mendonça and Dornelles tackle issues of colonization, corrupt leadership, and erasure—through a story of hunting humans for sport reminiscent of “The Most Dangerous Game.”

“Bacurau” never had a theatrical run in the US due to the recent shutdown, but I was able to watch it through Kino Marquee, a service by film distributor Kino International which partners with independent theaters to support independent cinema and the theaters themselves. When you watch a film through Kino Marquee, the proceeds from the ticket sale go directly to the arthouse theatre you choose to support. There are hundreds of theaters to choose from, including UICA in Grand Rapids. If you’re bored this weekend, I highly advise you to watch Bacurau and support your local theater.

“Bacurau” is set in a fictional eponymous town in the Sertão (backcountry) of Northeastern Brazil. As the opening credits roll, the audience is left to ponder Brazilian singer Gal Costa’s song, “Não Identificado.” The song is a psychedelic, experimental twist on traditional lounge music, beginning with a sample that sounds straight out of a horror film, hinting to the audience of what is to become. Though it begins poised as a social-drama, the film quickly transforms into a pulpy, grindhouse-esque western at the turn of the second act. This shift is a bit jarring, but the film does a good job of first surrounding the viewer in the atmosphere of the town.

It is with this blend of counter-culturalism, genre-bending, and shock that “Bacurau” finds its strength. The film has two strong focuses: the incompetence and oppression of government, and the disgusting brutality of neo-colonialism. The local mayor arrives in town with a flashy truck blasting a campaign song and gives the citizens broken boxes filled with expired foods, harmful drugs, and a literal dump-truck full of books.

In especially prescient imagery, one character realizes the town of Bacurau has been literally erased from Google Maps. The whole town has been forgotten, reminiscent of the way Brazil built up walls to hide the favelas lining the highways during the 2016 Olympic Games.

As for the critique of neo-colonialism, in the second act of the film, we are introduced to a group of wealthy, white tourists who have traveled to rural Brazil in order to kill people for sport. These people are ruthless, cold-blooded killers and clearly have made the people of Bacurau the “other.” Death is treated as a game. Their disgust for the people of Bacurau is clear by the nonchalant manner in which they kill them. The leader of the “expedition” is later revealed to be working with the local mayor, who has sold out his own people for money, a clear reference to American historical involvement in Brazilian politics.

Unfortunately, the flaws of the film lie parallel to its success. While the various twists and bizarre imagery of the film make it entertaining by virtue of its sheer creativity, they also lead to it feeling unfocused. The script jumps around too much, leaving the audience wanting more from nearly every scene. At the beginning of the film, one character explains to another that the town has been cut off from their water supply, forcing them to drive tankards upriver every day. However, this supposed water crisis is never mentioned again.

Perhaps the water shortage was simply intended to show the oppressive nature of the local government or the low level in society that these characters hold, but later scenes in the film do this far better and with more concision. It seems as soon as the shock of one scene has hit, you’re thrust into a different setting with a new character to focus on.

Yes, there are consistent threads throughout, but as a viewer I was unable to get invested in particular characters as nothing was dwelled on. Thankfully, this issue is mostly mended by the third act, and the plot begins to focus as the pace quickens. For some, this may be too little too late, but if you can see past the madness, you may find a new favorite film.