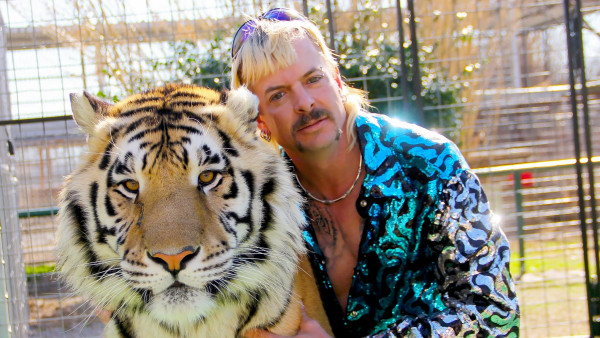 Photo from Netflix. Fair Use.

I first heard of “Tiger King” through Instagram memes. The Netflix original series had and continues to have the best PR money can’t buy: internet humor. It was a fitting entrance to a chaotic show. I and the rest of America needed a cathartic break from the constant fear that the sore throat we woke up with is something much worse, and with ubiquitous work from home/unemployment, the show quickly became the most watched Netflix series in America.

The seven-episode documentary series focuses on three private exotic animal zoo operators. There’s Doc Antle, a pony-tailed man whose zoo also functions as a cult, very loosely based on Eastern religions (emphasis on loosely). Next enters Carole Baskin, who claims to be the savior of caged tigers, but her shady past suggests that you shouldn’t trust the lady in leopard print. Finally, there’s the Tiger King himself, Joe Exotic. Exotic has a mullet, ran for president in 2016 and makes country music videos with his tigers about how much he hates Baskin.

The three do not get along with each other, but they’re remarkably similar. All three boast a (mistreated) harem of lovers, a devoted staff they pay slave wages and a stockpile of weapons that could take on the military of a small European nation. Every single one of them is likely guilty of multiple federal crimes. The tigers these three own are the hook to the show, but they’re truthfully the least interesting part. The first episode reflects this; forgive the pun, but it’s fairly tame compared to the rest of the series. The episodes that follow are much darker, and like a car accident, they seem to drift off without your noticing and then crash all at once.

But “Tiger King’s” draw isn’t just that of a car crash. There’s something beautiful about the show. The tigers and other big cats are stunning animals, and viewers can understand why people are attracted to them. Sometimes, Exotic seems to have a heart for the people who work for him, people who have been forgotten and pushed away. The beauty ends when this attraction turns into control. The men and women who run these private zoos tear apart vulnerable people in order to keep these animals in cages. And the way that Antle, Baskin and Exotic exercise this control is uniquely American. They either claim individual liberties to keep wild animals or barrage their enemies with lawsuits to hinder them. They wave around guns and slip their employees drugs and ask for Jesus’ blessing at the all-staff Thanksgiving potluck. Each private zoo is a get-rich scheme, and all involved are terribly broken.

“Tiger King” is strange and disheartening, and its characters bizarre and despicable — yet after the coronavirus itself, it’s the one thing people are talking about on every social media platform I’m on. It’s generated enough buzz that Netflix is releasing another episode of what was supposed to be a limited series, guaranteeing some more “Tiger King” mania. If you’re in need of something to watch to feel better about the world, it’s not “Tiger King,” but if you need something to make you feel better about spending most of your waking hours on your phone eating salt and vinegar chips, this is the show for you.