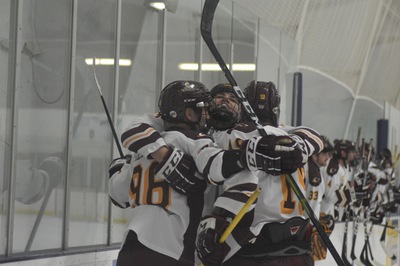 Knights celebrating a goal at a home game

In order to receive an invitation to nationals, a team must finish in the top 20 of the national rankings, and this year the Knights placed 17th with a regular season record of 15-7-2.

“Our goal when we started to participate at the D1 level a couple of seasons ago was to become a top ten program nationally. By qualifying for nationals this season means we are heading in the right direction,” said Head Coach Mike Petrusma.

Senior captain Austin Huizenga expressed a similar sentiment: “This has been in the making for three years now, ever since we moved to Division I.” He continued, talking about the team’s anticipation, “the guys are excited to get a chance to play on the highest stage.”

Coupled with much excitement is a necessary focus. Petrusma lauded his team’s hard work, saying, “With daily on-ice practices that begin at 6 a.m., along with twice-a-week off-ice workouts, our players take a lot of pride in their work ethic, preparation and focus.”

However, with new territory comes an enhanced understanding and focus for the Knights, as Petrusma said, “Every team at nationals’ win/loss records are 0-0 right now,” and despite being proud of the team he expressed how “we have a lot more work to put in and we are looking forward to the challenges at the national tournament.”

The tournament commences on March 19 against 16th-ranked Aquinas College (24-11-2) in Frisco, TX. The Knights split the series against Aquinas this season with a victory at home and a loss on the road, and are “excited to play an Aquinas team that we are familiar with,” said Huizenga.