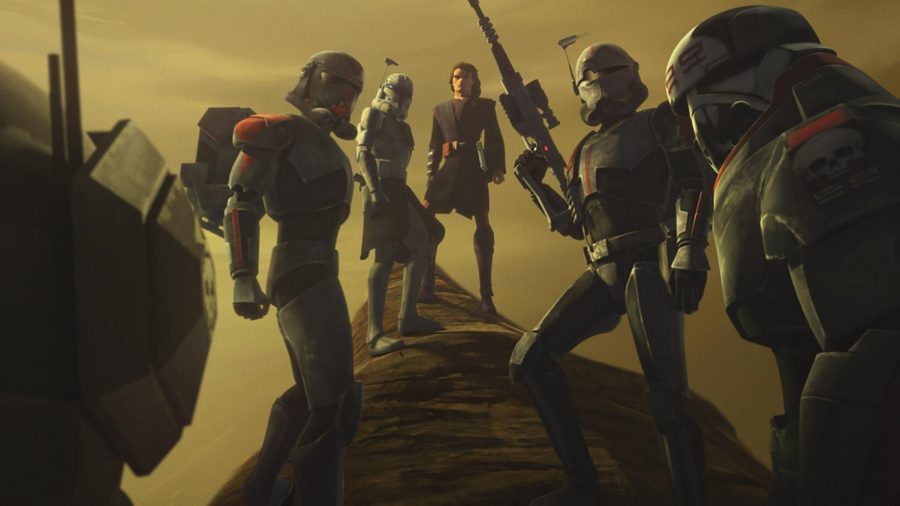 Photo from StarWars.com. Fair Use.

"A Distant Echo" raises tension with the Bad Batch as well as between Obi-Wan and Anakin.

“The Clone Wars” returns with a new episode that not only continues to explore new narratives in a galaxy far, far away, but also introduces new tensions to familiar and beloved relationships.

The first episode, named “The Bad Batch” introduced us to a squad of genetically enhanced clone troopers and their purpose for joining the show. This past week’s episode, “A Distant Echo” adds tension to the relationship between the Bad Batch and the rest of the squad of clone troopers while also introducing complications between Jedi Master Obi-Wan Kenobi and his former apprentice, Anakin Skywalker.

The clones’ investigation into a certain algorithm that allows the Separatist forces to effectively stop Republic advancements by the clones, continues the reconnaissance mission introduced in the first episode. After locating the source of the algorithm’s signal, the internal conflict between the Bad Batch and Captain Rex increases, partly due to the aforementioned clones’ disregard for authority and partly due to Rex’s personal involvement in the mission at hand.

The tension between the clone troopers is not the only example of complicated relationships in this episode. We’re also able to see the seeds of tension between Jedi Master Obi-Wan Kenobi and his former apprentice, Anakin Skywalker. There’s a clear disconnect between the two when it’s revealed that Obi-Wan is at least somewhat aware of Anakin’s secret marriage. In a simple, expository scene, this ongoing relationship is given more complications that will only continue to build into the eventual falling out the two will share later in the larger “Star Wars” story.

“A Distant Echo” triumphantly expands on the first arc introduced by this new season. Exploring the dynamic between the group’s internal tension introduced from the last episode and the personal involvement from the mission’s leader, Captain Rex, adds nuanced layers to what could have been an easy “search-and-rescue” episode. We feel the tension between the Bad Batch having to work with a bunch of “regs” (normal clone troopers) while also experiencing the hopefulness of Captain Rex trying to save a long-lost friend and fellow comrade. The tension and internal conflict plays out while simultaneously expanding on the larger, overarching story of the Clone Wars.

The second episode of this new “Clone Wars” season tackles a lot of relational conflict while simultaneously advancing a newly introduced storyline. “A Distant Echo” is another great reminder of the narrative complexity that “The Clone Wars” successfully employs, introducing and expanding on new stories while also maintaining and improving already existing narratives within the “Star Wars” universe. The series, especially with a strong start to this new season, continues to remain a strong example of why it’s important to pay attention to “Star Wars” media outside of the nine main films.