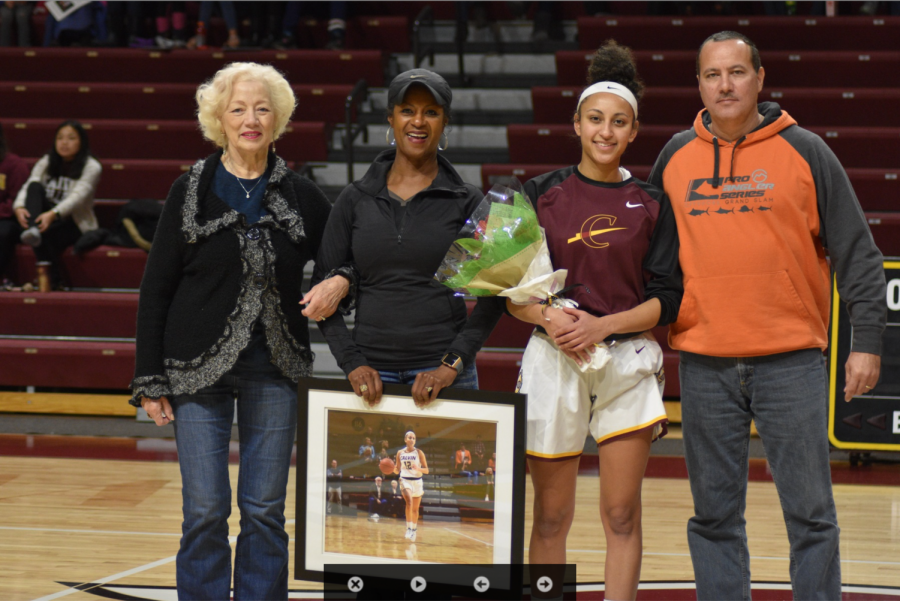 Sydney with her family on senior night

The women’s basketball team must say goodbye to their two seniors, Kara Minderhoud and Sydney Houlemard, butnot without them leaving a significant mark on the program.

Both Minderhoud and Houlemard came in from different locations and spoke to how right away there was a learning curve for different perspectives and styles. Minderhoud, from Grand Rapids, said, “I learned a lot about myself [through] growing my perspective on people and how everyone is different, and getting really close with people of different backgrounds.” Houlemard shared the sentiment, as “being from Louisiana was weird, [but] I felt that I was able to give an insight into some other parts of what other people had not experienced, and they were able to do the same for me.”

The seniors both emphasized the relational aspect of athletics as highlights of their tenure at Calvin. Minderhoud felt that “everyday I have a favorite moment with someone on the team.” They credited much of the heightened camaraderie of the team to new coach Mark Christner.

They both expressed how this year has been especially good for them, and when asked what has been so special about this year, Minderhoud responded simply, “Coach Christner.” Houlemard added, “I was a little nervous about [getting a new coach], but Coach Christner made the transition easy as he cultivated an environment where we all felt more connected.”

Christner was equally appreciative of the two seniors, as he said “both Kara and Sydney have done a wonderful job of leading by example through a time of transition.”

Minderhoud spent all four years with the team and has been a consistent starter with the team since her sophomore year. This year she has steadily produced solid contributions with a standout game against Northwestern Ohio, where she posted 12 points, eight rebounds, and five steals. As Minderhoud has established herself as a leader on the court, Christner lauded her “tenacity and resilience,” touting her as “the type of player that you can’t help but play because she is full effort.”

Houlemard played three out of her four years at Calvin and has been a leader from the second she first entered the locker room. Teammate Baylee Galan-Browne stated “Syd has shown us what it has truly meant to be a servant leader and was the voice that we needed to hear when we weren’t doing a drill so hot.”

Houlemard listed senior night as the highlight of her tenure at Calvin, as she started for the first time this season and helped the Knights with six points, three rebounds, and six steals. Her family from Louisiana came to watch her play. In this moment she reflected, “Dad being the person there for me, coaching me since I was six, and having him walk me out was really special for me.”

In a moment of reflection, Houlemard simply said, “It was a ride,” with Minderhoud jokingly adding in, “I think I fell off once or twice, [but] in retrospect it’s been the best experience of my life.” Houlemard agreed with this sentiment. They also expressed gratitude to the staff of the athletic department for “sticking with us and being by our side and listening to us when we needed them,” with a “special thanks to Coach Christner.”

As they look ahead, Minderhoud is excited to be getting married this June, and Houlemard is excited to go to grad school to pursue forensic psychology.