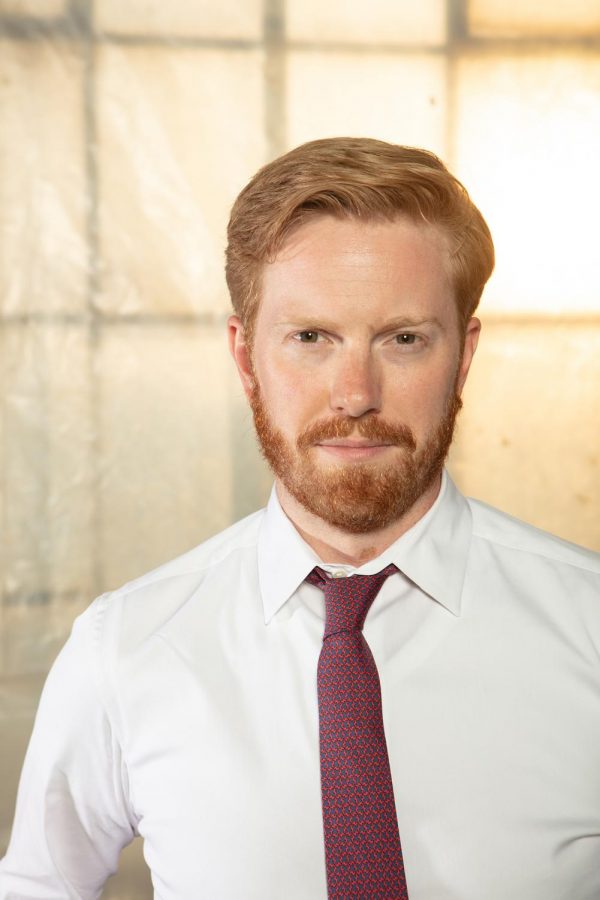 Clad in eco-conscious blue Allbird shoes and a black Patagonia vest, Peter Meijer wants students to know that he thinks the Republican party has dropped the ball on education, climate change and ending conflict overseas. He is one of four Republican candidates running for the MI-03 congressional seat.

A U.S. Army veteran and a grandson of Meijer grocery store founder Fred Meijer, Peter Meijer leads the Republican nominees in fundraising. No candidate of either party has managed to out-fundraise the incumbent, Rep. Justin Amash, who switched his party affiliation from Republican to Independent in July.

In early fall Meijer was in headlines after denying the group Drag Syndrome, a London-based drag troupe comprised of people with Down’s syndrome, from performing in a building he owns. Because of a possibility of a lawsuit from the American Civil Liberties Union, he could not comment fully, but said, “I had sincere ethical concerns with the performance.”

Meijer sat down with Chimes last week. Near HopCat’s downtown location, he and his eight-person team, which includes two Calvin students, are mapping out how to present Meijer’s brand of conservatism as the best option for MI-03. “Communities [should] be able to determine their own destinies and to govern themselves as they see fit,” Meijer said.

Meijer thinks he brings something different to the table. In his campaign materials, he touts being a “son of this community” and disses politicians who “spend their time trashing each other online.”

The Republican frontrunner says he’s heard this sentiment a lot on the campaign trail: politicians bicker rather than work on real issues. “[Voters] are just tired of politics that they always have to continuously worry about,” he said.

For college students, one worry they wish politicians would solve is the student debt crisis. Meijer pointed to directing federal subsidies just to academics rather than administration in colleges, instead of some of the Democratic presidential candidates’ plans to forgive student debt and create free college, but criticized the lack of plans from the GOP. “Too often, Republicans talk about Gen Z… as Tide pod-eating, ice cream-licking, self-absorbed narcissists, without understanding that this is a generation rising up with structural challenges,” Meijer said.

These challengers aren’t the result of capitalism, according to Meijer. “What is the capitalism that we grew up in?” he asked. “It’s a crony capitalism; it’s a bailout capitalism; it’s a ‘This is free market’ but what actually goes on is determined by the federal government capitalism. We need to get back to an essence of the market where the government is only stepping in to correct distortions, not to create them.”

He also listed growing up during decades of war in the Middle East as another failure of the government that college-age students have to deal with. Meijer was in Iraq as a non-commissioned Army officer during 2010 and 2011, later went to South Sudan with a humanitarian NGO, and went to the eastern part of the Ukraine with friends who were war correspondents. “There’s nobody who’s over there that would say, ‘This is going well. We know what we’re doing. We have a designated plan in sight,’” he said.

Additionally, as civilian casualties grow, Meijer sees the goal of long-term peace and prosperity getting farther out of reach. Meijer said that the U.S. should take an intelligence- and diplomacy-based approach. Again and again, he came back to the idea of subsidiarity. His faith, which he called a “deep motivation and guiding principle,” informs this view. For every area of policy, he said that the governments closest to people should be the ones making the policy that affects them. West Michigan, he thought, is a prime example of this principle working well. “This is not the land of American carnage,” he said.

“How do we encourage this sense of community, responsibility and accountability that we have here in West Michigan?” Meijer asked. It’s a job he thinks that the federal government can’t do. That’s why he jokes that he wants “to make America West Michigan again.”