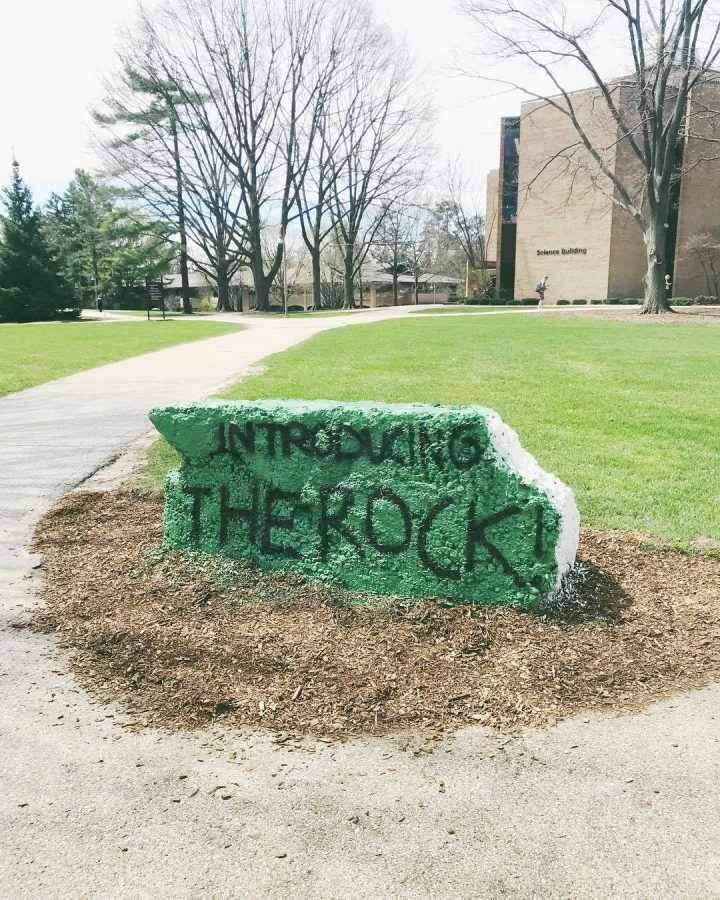 The rock, appeared on Calvin's campus in April 2019 and was removed less than a month later.

Calvin has a fight song. Most Calvin students don’t know that this fight song exists. Written by Mildred Zylstra, who graduated in 1932, its role in campus life and courtside is non-existent. A student can spend four happy years on campus attending sporting events and participating in extracurriculars and never once hear the words, “Come men of Calvin College, join our song!”

But Rebekah Baas, a sophomore team leader on student senate, and her team of first-year students are looking to bring the fight 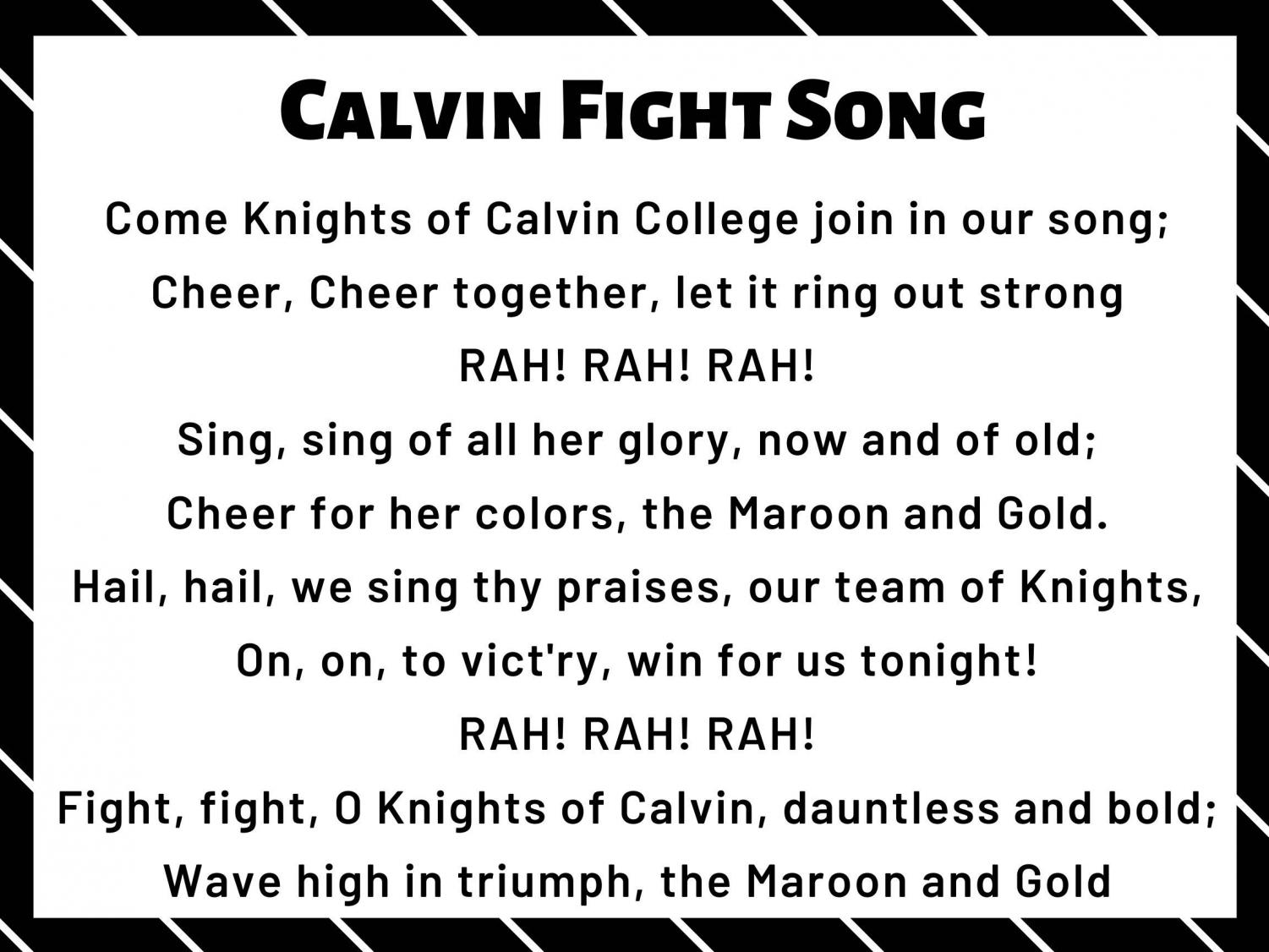 song into 2020. The first five words contain two outdated expressions. First, the senate initiative hopes to make the call to join the chorus gender-neutral by replacing “men” with “Knights.” After all, Calvin has more female students than male. Additionally, Calvin College is now Calvin University.

Baas said that while researching the piece online, she could only find it mentioned once, on Calvin’s athletic site Calvin Knights. The song’s obscurity raises two questions, the first being: Why take on a project that concerns a song so few students know about? “It was a way for us to take something fun and uniquely Calvin, and make it a bit more inclusive to the current university student body,” Baas said. Additionally, the project had been left unfinished by the freshman council the year prior, which had sought out ways to start up traditions to encourage school spirit. According to 2018-2019 director of freshman council and student senate Vice President Claire Murashima, the council didn’t just want to update the song; they wanted to rewrite it completely. There were plans to set up a competition where students submitted new songs, but no proposals ever came in. There’s the second question: Why do so few students care about the fight song?

Students offer mixed responses as to whether Calvin has good school spirit. Unlike the answers to the fight song, the answers varied but always pointed to sports as the indicator of Calvin school spirit health. Senior Justin Veenstra wished Calvin had a cheering section leadership to encourage attendance at games.

Veenstra said, “[Students] only show up to Hope games, and [at] other games it’s just kind of lacking in the student section.”

However, sophomore Emma Hayes pointed to the same Hope rivalry games and volleyball games as evidence that students do have spirit. She regularly attends events and recently went to a women’s basketball game.

Additionally, a Chimes article from last year reported on how basketball games struggled with low attendance. Various administrators and staff members have complained, in other interviews, that students don’t show up to events, whether they be games, concerts or movie showings. As one frustrated administrator quipped, when students can get every game, movie or song from their phone, they’re a lot less likely to leave their dorm. Last year’s freshman council looked to remedy this. In addition to creating a new fight song, the 2018-2019 freshman council suggested creating a “Hype Squad” to lead the student section at sporting events, an idea which didn’t gain traction, but Murashima hopes will happen naturally.

School spirit is more than just sporting events, which last year’s freshman council acknowledged. After researching in the fall, they proposed various reforms in the spring, like a Chaos Night-type event in the snow, a statue of John Calvin on Commons Lawn and a free expression rock. Looking to schools like Michigan State University, Murashima hoped that traditions that took root at other institutions would work here. However, bureaucratic obstacles and high costs prevented the former two from happening. According to Murashima, hosting an event on campus requires approval from multiple committees. Life-size bronze statue estimates range from $60,000 to $100,000, a figure well outside of a student organization’s budget. 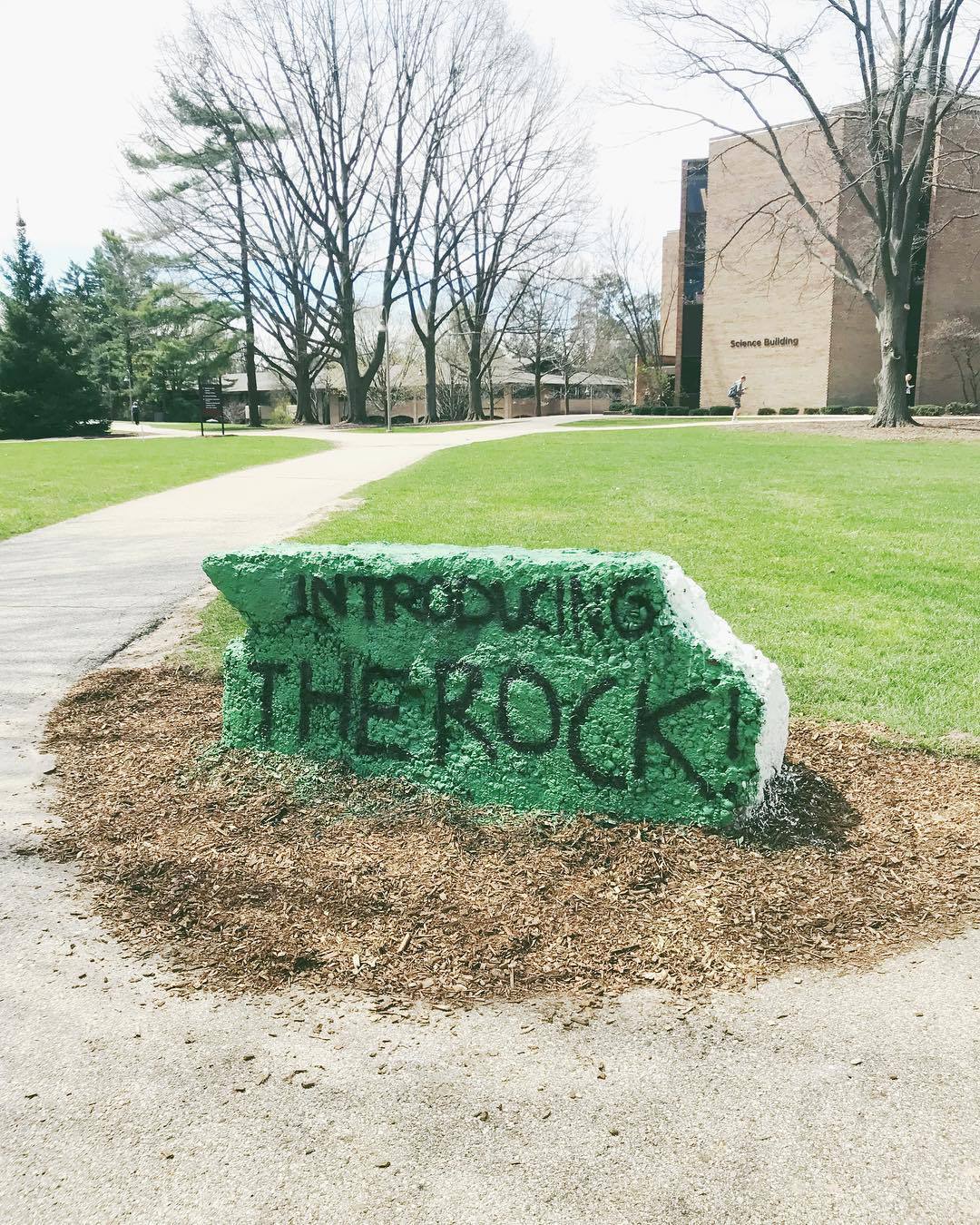 Jasmine Van DonselaarThe rock, appeared on Calvin’s campus in April 2019 and was removed less than a month later.

But the free expression rock did happen. Set up so that students could request to advertise for events, the boulder resting in the middle of Commons Lawn was quickly mocked on social media. Search “rock” on Calvin Memes for CRC Teens, a Facebook meme page for Calvin students, and a number of results pop up. Students painted on it messages about how they hated the rock and about phishing emails that made their way around campus. The freshman council was unable to keep painting over the vandalism, so the rock was taken away.

Faced with numerous committees, small budgets and limited work force, the freshman council was unable to implement any of their plans in a lasting way. However, their work laid the foundation for updating the fight song this year. Murashima said, “I think that it can be something that rallies students around a common interest, and I’m confident that it will be revised in the future.”

Baas isn’t looking to cultivate school spirit, just make the fight song more inclusive. “If this small project sparks a bigger conversation about what ‘school spirit’ looks like at Calvin that is great too!” she said. According to Baas, the final draft of the new fight song is ready, waiting for the blessing of Calvin administrators. The real tests of approval don’t have offices in the Spoelhof Center. The new and improved fight song is on its way.

Will the Calvin student body sing along?

Correction: The freshman team of student senate is revising the fight song, not the freshman council. Chimes regrets the error.