Branching out: double majoring outside of STEM 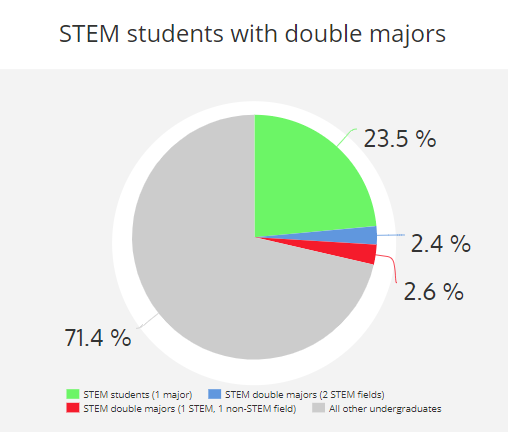 Calvin junior Molly Vander Werp has always been drawn to both biochemistry and writing, but growing up she assumed that at some point she would have to choose between the two fields. Three years into her college career Vander Werp is pursuing both fields as a double major, and says that she is grateful that she didn’t follow her earlier assumption and choose only one subject.

Vander Werp is part of a rare group of students who are double majors with one STEM and one non-STEM major. According to Assistant Registrar Melissa Hubka, out of approximately 3,100 undergraduates, 887 are STEM majors. (Hubka includes biology, biochemistry, chemistry, computer science, mathematics, statistics, physics and engineering majors in the definition of STEM). Of Calvin’s STEM majors only 82 students, or 2.6% are double majoring in a non-STEM subject. Spanish is by far the most popular of these subjects, with 19 students. Writing and music are in second place with six students each.

Professor Dwight TenHuisen, chair of the Spanish department, spoke about what double majoring in Spanish and STEM can

offer. He said that the joy of learning a language is the most obvious reason for studying Spanish, and also noted the appeal of studying abroad. TenHuisen also spoke about the career advantages that a degree in Spanish offers, noting the professional advantages of being able to communicate with Spanish-speaking patients. TenHuisen talked about how he has seen students relate their interests of healthcare and Spanish in his classes. “Common topics for capstone research projects therefore include studies of the medical systems in Hispanic countries or access to medical care available to Hispanics in the US,” he said.

Many STEM/non-STEM majors say there are frequent areas where their degrees overlap. Senior Matthew Bone spoke about the commonalities he sees between his philosophy and mathematics majors. “There’s actually a really strong connection between the two,” Bone said. “There’s a lot of overlap in terms of their content when you get to the theoretical side of mathematics, or more meta-mathematics.” Professor David Noe, chair of the philosophy department, weighed in on the appeal of a philosophy major, noting that both STEM and philosophy involve rigorous thought: “Students, I believe, are drawn to that, to the unabashed pursuit of the life of the mind.”

Senior Ivanna Rodriguez is majoring in data science and economics with a minor in international development studies (IDS).

She spoke about how she hopes to synthesize her studies after graduation. “My idea for the future is to use my degrees to produce evidence-based research when it comes to policies affecting income inequality and giving low-income communities access to assets.”

Senior Thomas Woltjer, majoring in music and computer science, said that he sees “pattern-based thinking” as an important component to both of his fields. The chair of the music department, professor Benita Wolters-Fredlund, echoed the sentiment. “Both STEM learning and music share an emphasis on systems and abstract patterns, which may explain why people who excel at

one excel at both,” Wolters-Fredlund said.

The appeal of doing a STEM and a non-STEM major may lie in the idea that paired together the subjects enhance one another. Bone talked about how even though philosophy is a “soft skill” compared to mathematics, he sees the skills of systematic and complex reasoning it taught him as valuable to his eventual career in the programming industry.

For Vander Werp, one of the things that she enjoys about double majoring in very different things is getting a bigger picture of the world than just one area of study would, although she recognizes that having a double major is just the start of broad learning: “Even two things aren’t giving the full picture.”