Coronavirus: the epidemic’s impact on the Calvin community worldwide 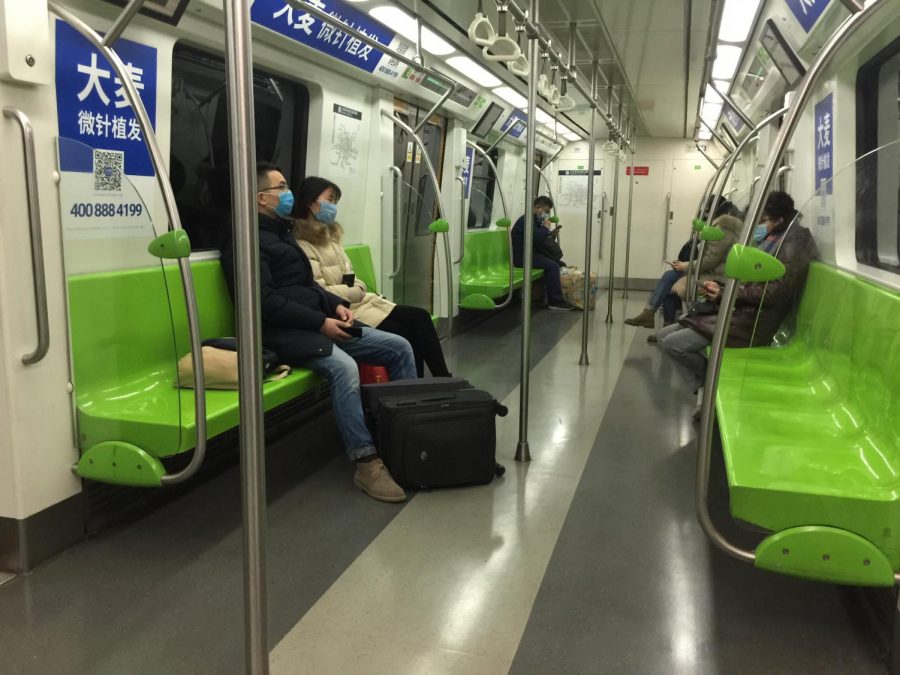 Passengers on an unusually empty subway in Beijing wear masks to protect themselves from the coronavirus.

For Priscilla Liu, a junior at Calvin and president of the Chinese Student Association (CSA), the Wuhan coronavirus outbreak is closer to home than the news headlines. Liu grew up in Guangdong, but her family is originally from Wuhan, and she has many relatives inside the city at the epicenter of the recent outbreak. She spoke about her concerns for her extended family, especially her aunt, who is ill with the coronavirus. “I cannot do anything about it since I am so far away,” said Liu.

Dr. Anding Shen, biology professor and adviser to the CSA, gave Chimes an update on the current situation of the Chinese student community. No one is sick with the disease, and everyone who needed to come back to campus after break or interim has returned to Calvin safely. Liu mentioned that for one student getting back to the United States was a close call, as she got on her plane just a day before the borders closed. As far as Shen knows, no one is returning from Wuhan. Shen normally leads a trip to China over interim, but this year the plans changed for unrelated reasons, before the coronavirus outbreak. “I see God’s provision there,” she said.

Although the odds of any returning student being sick with the coronavirus are very low, precautions have been taken. Shen asked any student just now returning from China to follow a two-week self quarantine, wearing a mask and staying away from others. Although this is not legally a necessity since no students are affected by the new travel and quarantine regulations, she thought it a prudent idea. Shen noted that students wearing masks and staying away from others might feel strange or alienated, and expressed her hope that the other students would reach out and let the students in isolation know that “you are still part of a community.”

On Wednesday, Feb. 5, Vice President for Student Life Sarah Visser sent out an email regarding the coronavirus. She stated that no Calvin students are in the high risk category for the disease, but asked any students or staff recently returning from China to fill out a form regarding their travels and current health. Additional information can be found on the Health Services website.

Calvin alumnus John Smith*, who has lived in Beijing for eight years and has remained in the city, which is now mostly under shutdown, offered Chimes an on-the-ground perspective of the situation in China. Last week, Smith shared about how people around him are reacting to the outbreak.

“I’ve watched public awareness of the existence of the virus increase steadily over the past week,” Smith wrote in an email. “One morning, my desk neighbor at work told me that she’d been so worried the night before that she had woken up several times to check the news for updates. Another local friend here in Beijing told me that he had decided to quarantine himself inside his apartment.”

In his most recent update on Feb. 5, Smith shared that the situation in Beijing had dramatically escalated, saying, “Life in Beijing over the past few weeks has been unrecognizable.” Smith noted that most people, himself included, are now working from home or have been given the week off. One thing that hasn’t changed is lots of food delivery workers on electric scooters, since people are afraid to leave their homes.

When Smith has to leave his apartment, he wears a mask and gloves, but mostly he tries to avoid going outside at all. “I’m currently minimizing my trips outside of my apartment, generally only going out once every three days,” he said.

Back at Calvin, Shen, whose research focuses on viruses, spoke about what makes the coronavirus unique. She explained that asymptomatic people can spread the coronavirus, making detection more difficult. Transmission is mostly respiratory: sneezing, coughing and talking can all spread the virus. The “Wuhan coronavirus,” as it has been called, is a novel coronavirus that has been designated “2019-n-CoV.” Shen explained that not everyone infected by this virus will develop severe pneumonia. The coronavirus has a mortality rate in between SARS and H1N1, at around 2-3%.

Shen estimates that the number of cases in China have been vastly underreported, with perhaps with seven times as many patients sick as the official tally suggests. Liu also said that she thinks the government reporting is far lower than the actual number of cases, although she said that she doesn’t believe now is the time to criticize the government, but to focus on supporting efforts to combat the virus.

With rising awareness of the coronavirus in the west, there has also been a rise in anti-Chinese xenophobia, something both Liu and and Shen discussed. Liu recounted an experience her roommate had told her about, where the roommate overheard her work colleagues joking about how guests at the Worship Symposium who were from Hong Kong were “scary” because they might be carrying the virus.  Liu talked about overhearing people making jokes about the coronavirus, and how much this bothers her. “In this time of confusion, this is not the time to joke — better to be praying for this country,” she said. She also talked about how she’s appreciated the support so many people have offered her.

“People are afraid of Chinese people or Asian people unnecessarily,” said Shen. She expressed her hope that such incidents would not take place at Calvin. “My hope is that Calvin as a Christian community can support each other better than the secular community. It’s time to let our light shine.”

*John Smith is a pseudonym. Chimes has granted anonymity to protect Smith from possible reprisal from the Chinese government.