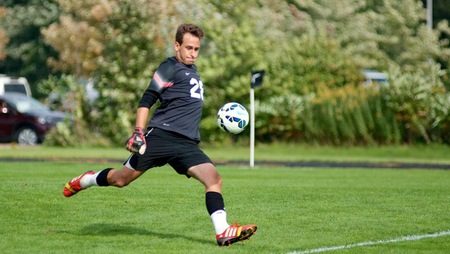 Calvin is highly regarded for its educational program, but it’s athletics department stands out as well. Year in and year out, Calvin teams accumulate over 100 top ten NCAA Division III tournament finishes since its origin. Additionally, Calvin has produced a number of professional athletes. Chimes interviewed three alumni who each had a tremendous amount of success at the collegiate level, earning both personal and team awards.

Niko Giantsopoulos (class of 2016) is a goalkeeper for Calvary Football Club, a team in the Canadian Premier League. During his time at Calvin, he gathered many accolades, including being named to the All-MIAA first team, posting an NCAA DIII single-season record 19 shutouts, and making a Final Four appearance.

Steve Honderd (class of 1993) played four years of professional basketball in Europe. During his tenure at Calvin, he was a two-time MIA MVP and Final Four MVP, and he led Calvin to a national championship. He still holds Calvin records in scoring average, free throw percentage, field goal percentage, and total points, rebounds, blocks, and assists recorded.

Aaron Winkle (class of 2000) played one year of professional basketball in Denmark. While attending Calvin, he was voted the NCAA Division III Player of the Year, ABC First Team All-American, and also led Calvin to a national championship. He holds Calvin records in total rebounds, assists, and free-throw percentage.

While reflecting upon their college experience, Giantsopoulos, Honderd, and Winkle all spoke positively about Calvin. The Calvin-Hope rivalry games were one of the highlights they shared. Additionally, the post-season also proved to be a testing ground. For these three players, this was a test their teams passed with flying colors.

However, all of them agreed that many of their favorite Calvin experiences took place outside of sports. Aaron Winkle explained, “My favorite part of my time at Calvin was relationships. Relationships that formed with my teammates and friends, and relationships I have formed with people who have become life-long mentors.” To this day, the three  remain very close to former coaches and teammates.

By the end of their senior year, each of these athletes had decided to begin their professional careers abroad. However, they had slightly different paths and motivations that took them there. For Honderd, he was ecstatic about the opportunity to travel. He explained, “Through basketball, we were able to travel to quite a few places … New Zealand, Russia … I wanted to continue that.” However, Giantsopoulos and Winkle headed overseas, because that’s where the best opportunities could be found.

According to these athletes, transitioning to the professional world of sports is a challenge. Each of these athletes faced some challenges. For Giantsopoulos, it was the added stakes. He explained, “It means more to people when you lose… people may lose their jobs if you don’t perform.” Playing evolved from being solely a passion to carrying all the stresses of a career. Winkle believed that element compromised the purity of the game. He said, “I think the game should be played a specific kind of way. It demands being unselfish, demands [putting] the team’s best before your individual bests… in professional sports where money is involved that’s virtually impossible.” As much as Winkle enjoyed his time abroad, for that reason, his time at Calvin was the highlight of his athletic experience.

For Honderd and Winkle, it was the social landscape. Moving to a new country and forming new roots is no small task. Honderd said, “When you went out there, you’re all on your own. Everything is different and you have to make it work.” This is not an unusual phenomenon. Winkle recalled, “Playing professionally overseas, for most can be a very isolating and lonely experience.”

Despite these challenges, Giantsopoulos, Winkle and Honderd all agreed that their time at Calvin equipped them well for the transition. Through the vicious rivalry games and the deep postseason runs, these athletes gained valuable experience in high leverage moments. When asked what advice they’d give to Calvin athletes, they all had much to say. Honderd sought to encourage students to embrace the opportunity. “Give it more than a year. The first year [is] really difficult. You’re learning a lot of things… each year gets better as you understand your role professionally on the team and lifestyles.” Giantsopoulos underlined the importance of developing proper habits while still in college. He explained, “Understand what it’s like to be a pro in your sport and live your life that way right now.” Winkle’s advice was about a support group. He said, “Pay for your best friend to come with you. Sharing the experience with someone you really care about will improve your experience by a hundredfold.”