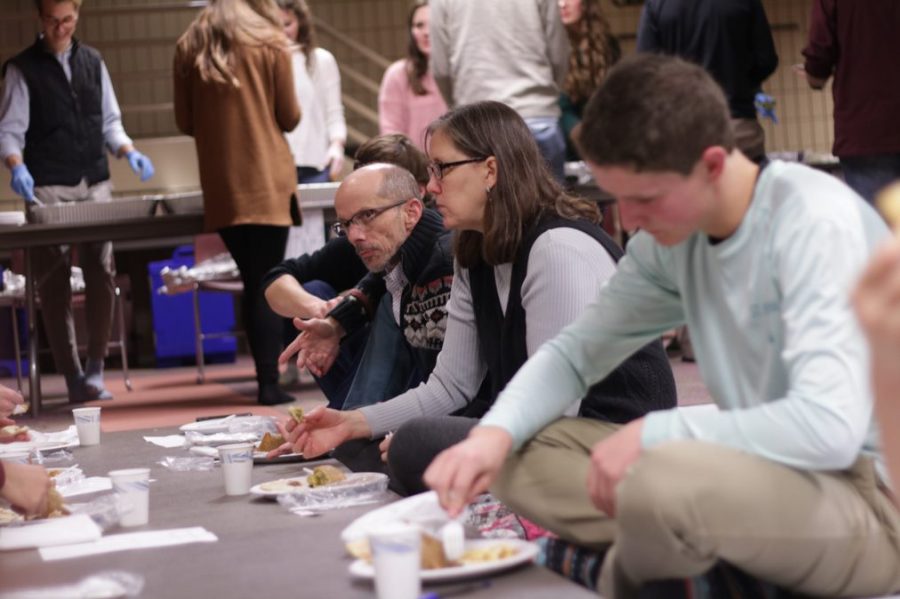 Roughly 100 people gathered Thursday night for Indian food and interfaith dialogue, hosted by the Calvin Interfaith Alliance. The co-directors of the student organizations said it was a stretch goal to have an event of this size and at first didn’t believe it was possible. However, they thought the night went better than planned. Co-director Samuir Santo said, “Everyone was very engaging… It was beautiful to see that people weren’t just [engaging with] the speakers but with everyone around them too.”

Participants walked into the Chapel Undercroft to find most of the tables on the floor. Following Sikh traditions that reject social hierarchy, everyone eats at the same level to show equality. As people sat down to eat the vegetarian meal, which included samosas and naan bread, the different speakers presented briefly on their religious traditions.

Fred Stella, a radio host and longtime interfaith activist, spoke about how the Hindu tradition sees all things in the universe as an extension of God, so offering food to God or eating it is “God eating God.”

Stella said that food has a unique ability to connect people in interfaith work. “When you get people around food, it creates community in such a powerful way,” he said.

Isabella Lieberman, a college student and intern at Grand Valley University’s campus interfaith, gave a brief explanation of Judaism and traditions like “oneg shabbat” where Jews share desserts to celebrate the Jewish day of rest. Rishi Makkah, owner of Rishi’s International Beverage and an activist in Grand Rapids interfaith work, talked about how Sikh’s pursue God through the mind. Sikhs have a long tradition of serving the hungry.

Following the conversation, there was a question and answer session alongside dessert. Participants asked the speakers about whether one could practice Christianity alongside Hinduism and Sikhism, the various religions’ stances on homosexuality and why they do interfaith work.

Stella noted how interfaith work has the tendency to create “holy envy” where traditions have the ability to admire spiritual exercises in other religions.

The participants there were a diverse group. Calvin students, professors and alumni all attended, as well as people connected to GVSU’s campus interfaith.

Alexa Sanders, a sophomore studying political science and economics, thought that the night was “amazing” and remarked that she enjoyed hearing about the religions firsthand. “I think, a lot of the time, ‘Why is it so segregated and so separated and why don’t we try to listen to other religions?’”