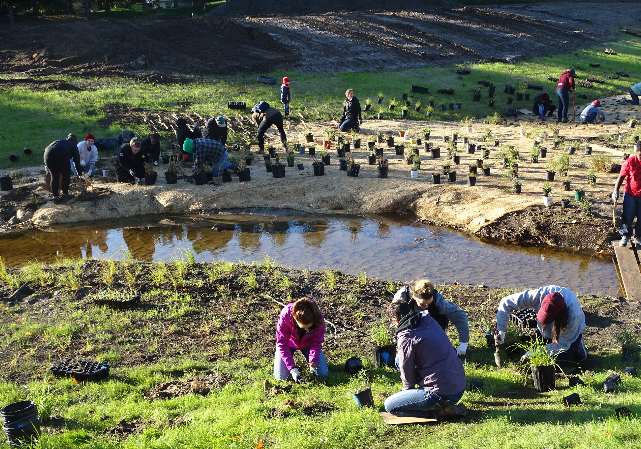 More than 100,000 native plants are grown every year by Calvin-based organization Plaster Creek Stewards. Each plant will aid in the restoration of Plaster Creek, the most contaminated urban waterway in West Michigan, but plants are only one portion of the group’s efforts to clean up the creek.

Warners told the story of how Plaster Creek Stewards came to be, emphasizing the importance that the concept of place-based learning played in the group’s creation.

“How can we do our teaching and our learning in a way…that enhances the place we are in?” said Warners, “How can we…make the broader community within which Calvin resides really happy that Calvin is here?”

Calvin itself is part of the Plaster Creek Watershed, meaning that the rain that lands on Commons Lawn eventually ends up in Plaster Creek.

Plaster Creek has become polluted by the variety of communities that inhabit it — agricultural, suburban, industrial, and urban. The forms of pollution include bacteria, hydrocarbons, sediments from flooding caused by excessive runoff, thermal pollution, and trash. Heffner recalled that 15 tires had once been dumped in the creek. The contamination is so bad that humans are not supposed to interact with its water. In an email to Chimes, Heffner shared that “The Michigan Department of Environment, Great Lakes, and Energy (EGLE) has deemed it unfit for even partial body contact.”

Plaster Creek Stewards uses a combination of education and action to aid the restoration of the watershed. Volunteers, who are critical to the group, consist of a mixture of Calvin students and members of the Grand Rapids community.

Heffner shared some of her favorite memories of working with volunteers. “The youngest person that’s ever come is 18 months old and actually helping his parents plant plants ,” he said. “The oldest person was in their 80s.”

Plaster Creek Stewards has partnerships with over 20 houses of worship, including a mosque. Warners talked about how rewarding it was to work with the congregation of the mosque, and the research they produced together called “Interfaith approaches to watershed restoration.”

Heffner, who has her PhD in Urban Studies and Resource Development, talked about how environmental justice is important to the work of Plaster Creek Stewards. The river is most polluted downstream, which is in the urban communities of downtown Grand Rapids. She talked about the importance of a clean environment for “a healthy urban neighborhood.”

After a decade of work, there is still more to be done until there is a measurable decrease in contamination levels, but Warners and Heffner are not discouraged. At the beginning of the project, the Michigan Department of Environmental Quality told Plaster Creek Stewards that it would most likely take 15-20 years for the bacteria levels in the waterway to drop significantly. Plaster Creek Stewards are looking forward to seeing this bacterial decrease in the future, but in the meantime there are other signs of progress. There are a few hundred thousand more native plants in the watershed, and Warners noted that there seems to be an increase in butterflies around the creek.

“I’m proud of the perseverance that has been shown.” Warners said. “This is not easy work. It’s hard to convince people it’s important…it’s physically hard as well. Finding other people with this common interest and passion helps.”