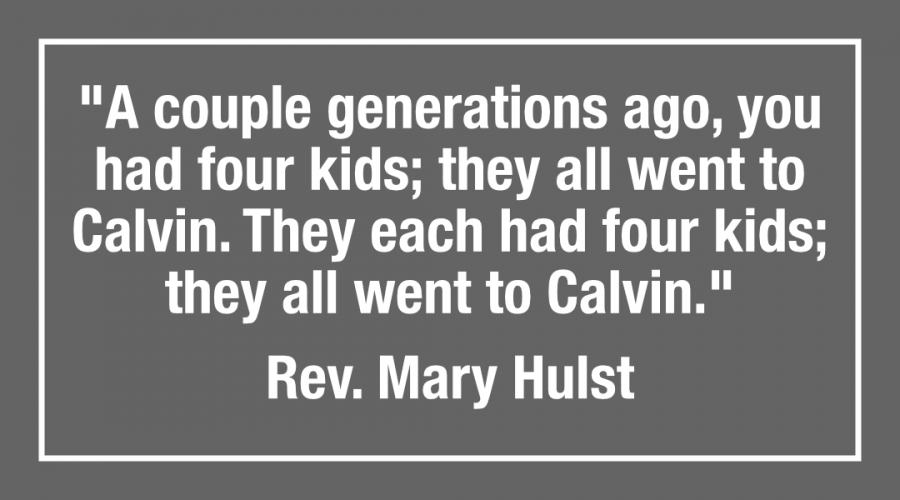 In a 2014 editorial for the Banner, the magazine of the Christian Reformed Church, a retired pastor made a plea for members to continue sending their children to Christian schools. It was titled “The Three-Legged Stool,” drawing from an old metaphor used to describe how Christian schools, the church and the family relate to each other. All three, so it went, would support the child’s spiritual development.

The metaphorical stool certainly still exists within the CRC and at Calvin University; however, the legs have become a lot shorter. The membership of the denomination and the enrollment of Calvin and local Christian schools have decreased steadily in the last few decades, according to data from the CRC and the Day 10 report. Family size has shrunk. CRC members aren’t necessarily sending their kids to Christian schools anymore; Christian school graduates aren’t necessarily attending Calvin anymore; and Calvin graduates aren’t necessarily joining their local CRC anymore. In an email to Chimes, Calvin University President Michael Le Roy said, “Most of us observe that denominations, as we knew them in the twentieth century, are giving way to fewer baptisms, closed churches, and the rise of non-denominational churches and movements across North America. It is clear that the future relationship will be different, but the exact form and nature of the relationship is unclear at this time.”

Reflecting broader North American trends, the birth rates within the CRC and within the Midwest are lower than in the past, hitting all three of these institutions. In 1990, 5,917 children were baptized in the CRC. In 2018, only 2,834 children were baptized. The evangelism totals were also lower in 2018 but have generally stayed fairly constant since 1990. Steve Timmermans, director of the CRC, pointed to the changes in professing members versus the changes in total members from 1999 to 2019. In both Canada and the United States, the drop in professing members (adult members who take communion) has been far smaller than the total number of members which reflects a decrease in the number of children. Rev. Peter Jonker, the minister of preaching at LaGrave CRC, noted that he sees fewer families with four or five children. Rev. Mary Hulst, Calvin University pastor, said, “A couple of generations ago, you had four kids; they all went to Calvin. They each had four kids; they all went to Calvin.”

Additionally, Hulst pointed to declining denominational loyalty, specifically with the founding of Willow Creek Community Church. The successful megachurch, which defied typical conventions around worship, ministerial training and denominations, had a “ripple effect” on many churches across America. West Michigan joined the trend with the rise of its own popular megachurch Mars Hill in Grandville. Whereas before churches in the CRC would have homogeneity because of shared things like a common hymnal, a similar liturgy and the routine preaching of the Heidelberg Catechism, these same churches started to glean aspects from Willow Creek’s services. “Denominational churches, whatever the denomination, began to look less like their denomination and more like the generic non-denom, small ‘E’ evangelical worship type,” Hulst said. This meant that a service at a Methodist church and a CRC congregation would share many characteristics. According to Hulst, many young people who grew up in the church then didn’t mind attending a different denomination than their home church because, for the most part, it seemed the same.

A cultural shift in the CRC happened alongside the decline of denominational loyalty. Decades ago, it was assumed that members would send their kids to Christian schools. Now this isn’t the case. Tom DeJonge, the superintendent of the Grand Rapids Christian Schools system, said that younger families within the CRC have a competitive list of schools for their kids. “That’s just a shifting expectation in the minds of families who are just now raising kids,” DeJonge said.

Last year was the first year that Grand Rapid Christian High School’s percentage of the student body attending a CRC dipped below 50%. South Christian High School Principal James Peterson echoed DeJonge. “30 years ago there would have been a stigma on families who did not send their kids to Christian school, but today much of that is gone,” Peterson said. Peterson estimated that CRC students made up the vast majority of students at roughly 70% but said the percentage was closer to 90% decades prior.

This poses another challenge to Christian schools and Calvin. Although the CRC does not run parochial schools, the Christian K-12s and Calvin have relied on support from congregations, so that families who are in need can afford to pay for tuition. A school system like GRCS has 37 supporting churches; all but one are CRC. However, DeJonge said that Grand Rapids Christian Schools provided roughly $2.6 million in tuition support to families last year. 30 some years ago, said DeJonge, this fund would not have existed because churches would have picked up the tab. Additionally, more of that tuition assistance is going to families in the CRC, whose churches cannot fully help them cover costs. DeJonge said that roughly six years ago, GRCS started this Supporting Church Partnership Grant. Its first year, the grant gave out $10,000; this year, the grant provided $567,501 to families in supporting churches. DeJonge stressed that this is assistance that GRCS is happy to provide given the legacy of generous giving from CRC churches. Peterson also pointed to rising costs in health care and additional program expectations which drive up the cost of Christian education past the rate of inflation.

According to Peterson, these costs are part of the reason why Christian high school graduates aren’t attending Calvin in the same high percentages. “Locally Calvin has significant competition from less expensive schools,” Peterson said. “When I was a kid, GVSU and Davenport were small and had poor reputations. They have changed both those perceptions, and I am sure draw local students from Calvin.” He added that students considering middle-class jobs like being a teacher or nurse don’t want unmanageable debt. DeJonge had also observed that students are considering a greater number of colleges while looking at their next steps.

Jonker stated that this increasing cost has also resulted in a loss in class diversity for Christian schools. “Because support in my childhood church was cradle-to-grave support, meaning that almost all the church members gave generously to Christian schools their whole life regardless of whether or not they had children in school, the schools were able to accommodate people of middle-class means,” Jonker said. LaGrave spends $450,000 on Christian education assistance for the 80% of its student-age congregants that attend Christian school, allowing it to maintain the support Jonker said is necessary. According to Jonker, for a school like GRCS, the new system of support, generated by the school itself, has resulted in less class diversity, but more racial diversity.

Likewise, Timmermans pointed to the 16 new church plants in the CRC, 14 of which are mostly multiethnic or of non-European descent. “Our new churches look more like the landscape and less like the history,” Timmermans said. However, many of these churches don’t have access to Christian education, and their congregants aren’t used to paying tuition for K-12. For these families, the CRC and the Christian schools have to make their case as to why Reformed education is worth the cost. Calvin faces these same challenges with its new field of potential students. “We’ve had to shift toward being explicit about what it means to be Reformed,” Hulst said. However, Hulst is optimistic that the Reformed vision of education will be appealing to parents wanting a Christian influence in their children’s education that is still intellectually strong. Jonker also agreed that Reformed education is a valuable contrast to educational systems focused on performance. “I believe in Christian education. I see the challenges of it and I see its weaknesses, but we live in a world where children need instruction for their souls,” Jonker said.

Le Roy, who grew up on an island in the Puget Sound with only one public school, said that Christian education happened at church and at home for him. In secular environments, he felt conversations about faith were pushed to the side. Echoing Jonker, he believes that Christian education, partnered with the support of the church, gives students a deep understanding of core issues and the ability to articulate that from a faith perspective. “A Christian education allows the student to be educated as a whole person because it recognizes that we cannot divide the body, the mind, the spirit, or the heart,” he said. “Our faith is not merely a private matter, but it is a full part of the learning and discussion.”