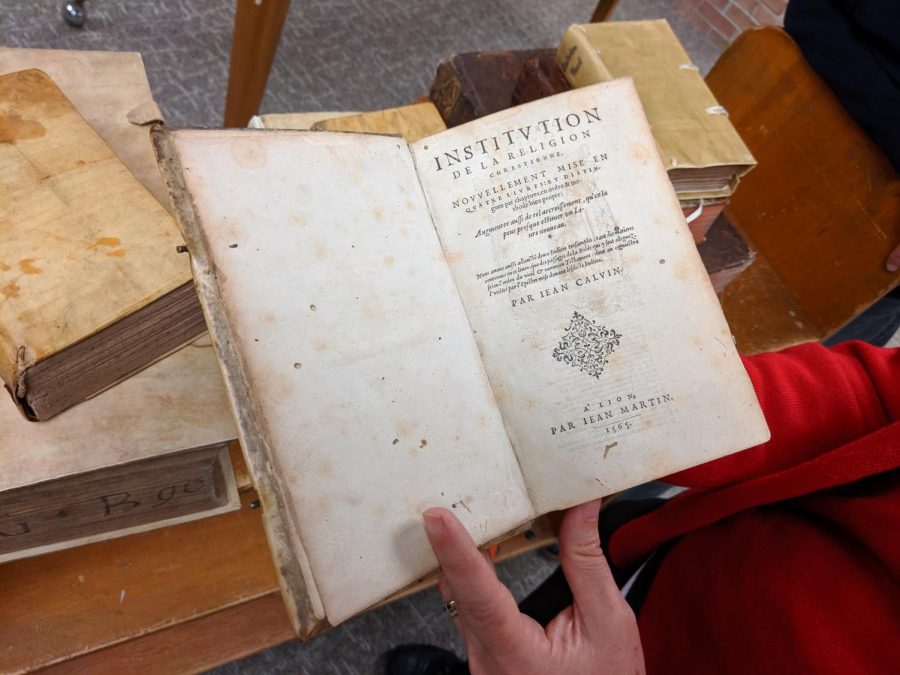 A rare book from Calvin's collection

The H. Henry Meeter Center recently purchased 11 rare books in editions not previously contained in their collection. Included in the purchase were 16th century copies of John Calvin’s Institutes and commentaries, a Luther Bible, and copies of catechisms.

The donors that provided the funding for this purchase were Calvin history professors Kate and Frans Van Liere, who made the donation in memory of Kate Van Liere’s mother, Thorne Tjader Elliot. Frans Van Liere said, “The Meeter Center is really one of the world’s top institutes for the study of Calvin and Calvinism.” Kate Van Liere continued, “My mother had died in March and we wanted to make a gift to Calvin in her memory. This seemed a very suitable way to direct that gift.”

These books add to the Meeter Center’s collection of already more than 600 rare books. Dr. Karin Maag, director of the Meeter Center, explained that donors don’t like to disclose how much specific items cost, but the average price of a rare book can range from $1000-$4000.

This lot was purchased from the private collection of François Dermange, a professor of ethics at the University of Geneva. The oldest book in the lot is a copy of Calvin’s commentary on Corinthians from the first edition printed in French.

The catechisms in this collection, Maag stated, would have been used by children to learn texts and languages. Because of their young users, these books typically don’t survive very long. The institutes and commentaries, however, would typically have been owned by pastors and professors in their private collections.

Bibles in the vernacular were usually owned by families and were a significant purchase that would be passed down through many generations. Some of the books even have the names of past owners signed in their covers and writings in the margins.

Typically printed in sets of about 500 copies, these books were created by letter presses – a process in which individual letters are laid out in mirror image of the text and pressed onto paper. The paper on which these books are printed is made of linen rather than wood pulp, which has allowed them to remain in astonishing quality even centuries after they were made. The Luther Bible includes ornate prints depicting bible stories and, on some pages, uses both red and black ink, which would’ve required multiple presses.

Luther’s translation of the Bible is significant in linguistic studies, Maag said, because as the most commonly available text, it shaped the development of the German language over time.

The rare books in The Meeter Center are open to be viewed and studied by any visitors who desire. Maag stated that common viewers include scholars studying the progression of translations and differences in wording between editions, artists wishing to study and copy the artwork found in historic Bibles, and students and visitors simply interested in rare books. When not in use, the books are stored in a temperature controlled, limited-access storage room.