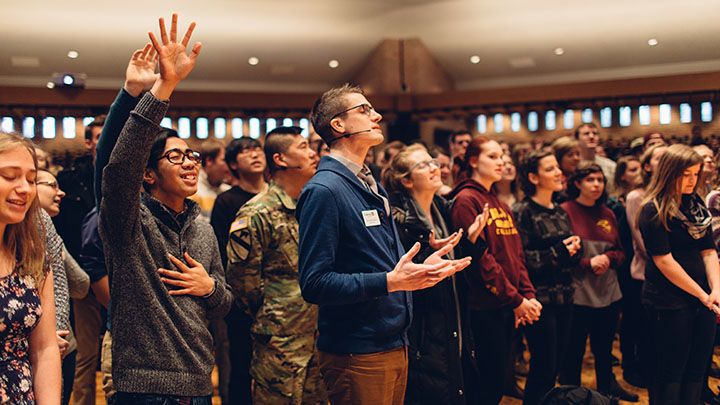 Chapel this semester will be livestreamed, and humming will replace singing in viewing rooms on campus.

The number of CRC students at Calvin has declined over the past six years and it’s not just due to decreasing overall enrollment. More specifically, the percentage of Calvin’s student body that identifies as belonging to the CRC has steadily decreased from 37.5% in 2013 to 28.3% this year. According to Sarah Visser, vice president for student life, two of the most significant factors in declining CRC enrollment are the region’s declining Christian high school population and an increase in the institutions CRC students consider and apply to.

John Witvliet, director of the Calvin Institute for Christian Worship, explained that there are many more options for where CRC students may attend high school. Many students may not have access to a Christian high school education. Similarly, many CRC-affiliated high schools have seen an increase in students unaffiliated with the CRC.

Overall, private schools have seen a decline in enrollment over the past few years. In their most recent data report, the Western Interstate Commission for Higher Education — a regional organization that facilitates resource sharing among higher education institutions —projected steady declines in private high school enrollment for years to come.

When addressing the increase in institutions which CRC students apply to, Visser explained that historically it was not uncommon for CRC students to only apply to Calvin. She continued to say, “Today, we find that students typically apply to several institutions and that their consideration of institutional fit involves more than just denominational affiliation.”

Visser expressed that administration has been encouraged by the increase in students from outside the CRCNA and the Christian faith, citing Calvin’s Vision 2030 statement which says, “We welcome all who are compelled by God’s work of renewal to join us in the formative pursuits of lifelong learning, teaching, scholarship, worship, and service.”

According to Witvliet, 20-25% of CRC congregations in the US and Canada have an ethnic identity other than white or Dutch descent. “Surprisingly, one way for Calvin to become more diverse could well be to engage the CRC more rather than less, especially this diverse group of congregations,” Witvliet commented.

As CRC enrollment decreases, Visser emphasized that Calvin continues to maintain strong relationships with congregations in the CRCNA and a commitment to Reformed Christian education. She referenced the current strategic plan which calls for programs that will benefit Reformed faith development at Calvin as well as programs that build the ability of students, staff, and faculty to cross culturally engage while remaining respectful of differences.