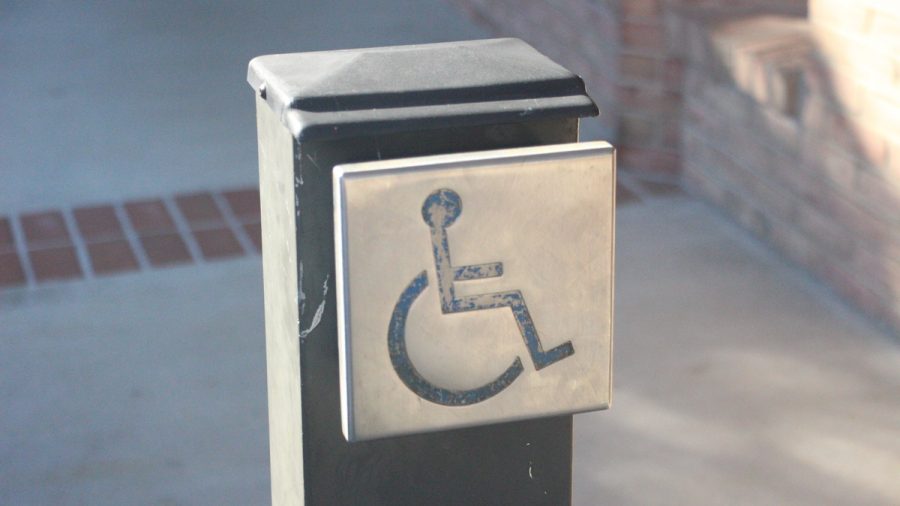 Some of us never think about how we get around campus; for others, it’s a daily concern. James Turner, a mathematics professor, knows firsthand the difficulties of navigating campus, specifically North Hall, in a wheelchair. Since the math department is on the second floor of North Hall, a building which has no elevators of its own, Turner is forced to take a less direct route to his office through the Science Building or DeVries Hall. Although this works most of the time, as he typically parks in the lot behind DeVries Hall, when he is coming to his office from anywhere else on campus this route is a significant detour. However, Turner said, “I don’t really see this [indirect route] as a burden or anything like that.” Like many people with mobility-related disabilities, Turner is used to having to take more inconvenient routes to his destinations.

According to the DCM course Dis/Ability’s research into the accessibility of Calvin’s campus, although there are some accessible doors (meaning button-activated doors) in the space surrounding Johnny’s, others are not accessible. The Johnny’s entrance closest to the dorms requires the use of stairs. A student with a mobility-related disability would have to go around the entire dining hall to another entrance in order to access Johnny’s. While this detour may seem insignificant to someone without a mobility-related disability, that extra distance can require a lot more effort for someone who is, for example, in crutches. Another option would be for the student to enter Commons and use the elevator, which goes down one floor to Johnny’s and up one floor to Uppercrust. However, this elevator is unmarked and has no directing signs. If that wasn’t enough, the entrance to this elevator is located adjacent to the back-of-house for the dining hall, and consequently often has storage carts placed in front of it. These carts are heavy and would be hard to move for a student using a wheelchair, and block a student’s view of the elevator, further exacerbating the issue of finding it in the first place.

Though the routes available to those with mobility-related disabilities are often inconvenient, this problem can be difficult to address. One suggestion Turner had for dealing with these inconvenient routes is giving a pamphlet to students with mobility-related disabilities explaining the fastest accessible routes to different locations on campus. He said, of his own experience, “You get accustomed to certain ways to go places, but then you find alternate ways and then suddenly what were challenges really don’t become challenges anymore.”

However, the hard part, especially for new students, is figuring out these routes in the first place. Turner suggested, “It would be good to sort of have … some sort of pamphlet that says, ‘Here are the ways you can get to this point here.’” In Turner’s experience, “Everything here is doable, but sometimes it takes a bit of investigation.”

Calvin’s physical accessibility issues are largely due to the age of the buildings on campus, and the Americans with Disabilities Act (ADA) does not require previous construction to be brought up to current ADA regulations if it is unreasonably expensive. Because of this, solutions such as installing more elevators are not required by law.

Calvin is aware of and transparent about these shortcomings. According to Lisa Kooy, a disability coordinator in the Center for Student Success, “We [at Calvin] acknowledge there are areas on campus that are not fully accessible.” Limited by outdated structures, Kooy stated that Calvin looks forward to “opportunities where [Calvin] can renovate spaces or build new spaces that meet or exceed ADA standards and provide an inclusive space for all students, staff, faculty and visitors to our campus.”

Sometimes the reason for the ADA requirements not being met is not the age of the buildings. The push buttons for the automatic doors are not always fully functional. There are 81 push buttons in academic buildings on campus; 76 are functional, five do not function and several require a significant amount of pressure to activate — creating difficulties for people with certain disabilities. People can fill work requests through Physical Plant, although this takes time and not everyone is aware of how the process works. This is evident from the door opener buttons for the Hiemenga Hall entrance nearest to the Chapel, which some faculty claim haven’t worked for “several years.”

Kevin Timpe, a philosophy professor who also recently published an article on accessibility titled “Disability and Inclusive Communities,” claims some of the accessibility issues on campus seem to stem from simply not understanding what the ADA requires. For example, Timpe explained that during a course he taught last year, he invited some individuals from the Disability Advocates of Kent County, which is a local agency that works with disability in the community, to visit his class. During their visit, these advocates explained to Timpe that even his door knobs are not up to ADA code, as they require a twisting motion which can be difficult for people with certain disabilities. Although this change would still fall under the ADA’s policy on previous construction, Timpe believes it should still be addressed.

Major renovations require money, and Calvin has been going through budget cuts. However, Kooy said this is no excuse for shirking accessibility. “Accessibility is everyone’s responsibility.” Calvin has a fund, overseen by CAAC, called the Nagel Disability Fund, which Kooy explained “was established by donors to provide financial support for the advancement of accessibility on campus.”