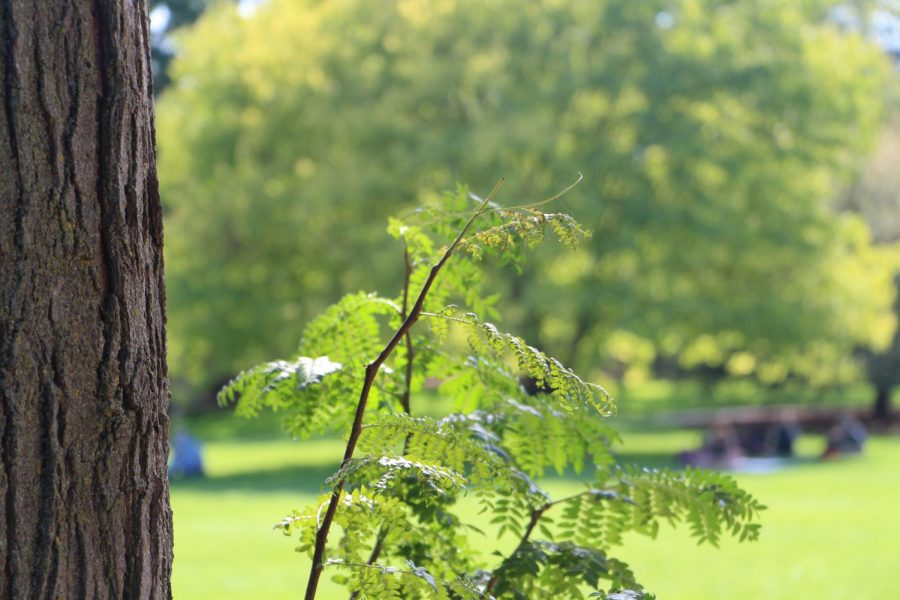 “When our planet’s under attack, what do we do? Stand up! Fight back!”

These chants echoed through campus as Calvin students marched in support of the international climate strike on Friday. On September 20, just days before the UN Climate Action Summit, people around the world took to the streets to protest climate change. They left jobs and schools alike to demand climate action from governments, corporations, and individuals. According to The Washington Post, people in over 150 countries participated, making it a global movement.
Calvin was no exception. Friday morning, event organizer and Calvin sophomore Matthew Doty’s voice rang across Commons lawn. “If even one action of mine can stop a millionth of a degree of warming…I suddenly feel a grand power to do that thing!”

A small crowd of students, professors and community members gathered around him. According to freshman Ben Bruxvoort, “participating in the strike… made me feel like a part of something greater than myself.”

Although the protesters at Calvin supported the general goals of the movement, they were also there to send a message to the administration. In 2017, Calvin committed to carbon neutrality by 2057 — a step that the protesters applauded. However, their petition was still critical of Calvin.

In Doty’s opinion, “this [climate change] is not a political issue. It’s a Christian issue.” According to biology professor David Koetje, even optimistic predictions of global warming’s effects include killer heat waves, crop declines and coastal flooding — and, if we continue on our current trajectory, we’ll see mass starvation and watch the tropics transform into deserts. The aforementioned petition states that “the damage done to Earth’s life-support systems violates our religious and moral obligations…to leave…not an impoverished and dangerously unstable world, but a world as rich in possibilities and promise as our own has been.” In the eyes of its writers, “doing our part to mitigate climate change…will allow us to honestly claim that Calvin University is responding to God’s call to love our neighbor.”

So, after a few speeches, the protesters began to march around the south end of campus. “No more coal, no more oil,” they chanted. “Keep our carbon in our soil!” For freshman Eleanor Lee, it was a unique experience. “I don’t usually make a big ruckus if it’s not a sporting event,” she said, “but it’s cool to stand up and voice our concerns.” She paused, then added, “I hope someone listens to us.”

For Doty, Friday’s event was undeniably a success. “The goal is not turnout,” he said. “The goal is recognition that there’s passion on Calvin’s campus for this.” In fact, to him, “someone who is willing to put the work in to organize the event is actually more convincing… because what you’ve got there is someone who’s dedicated to making a difference, no matter how insurmountable the odds.”