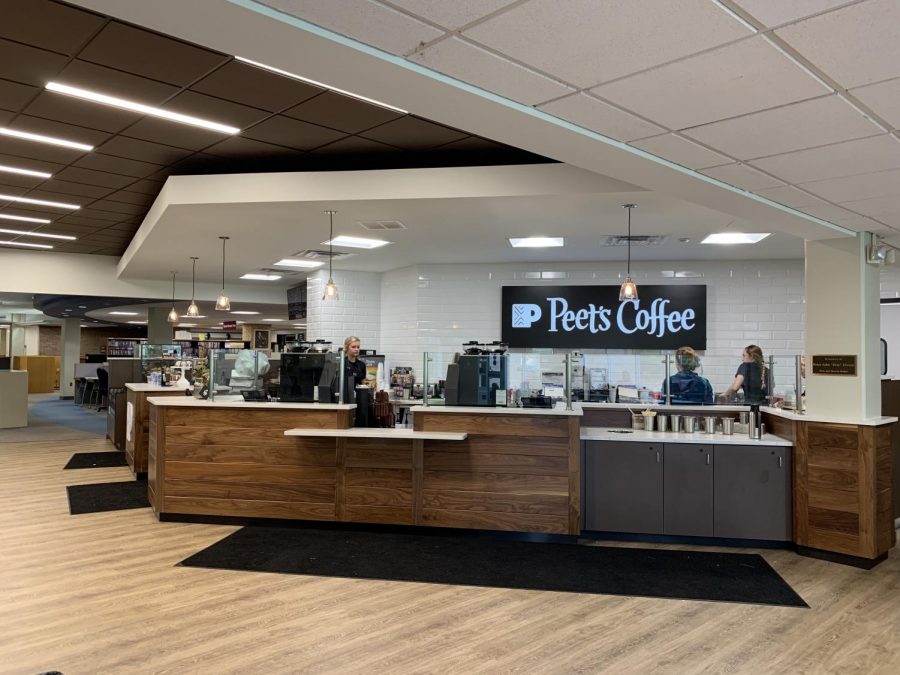 Photo of the new coffeeshop in the Hekman Library

Faculty and students returned to Calvin in the fall to a new coffee shop, Peet’s, in the Hekman Library. Originally planned to open in the spring of 2019, the California-based chain served its first cup on August 1, 2019.

The opening of Peet’s brought an influx of people to the library. “The first full week that this was open, compared to the year previous, 700 more people were in the library in that week.” Dean of the Library, David Malone, said. “That was not even school yet.”

Malone and Kathy DeMey, a research librarian whose office is on the same floor as Peet’s, both acknowledge the increased noise levels that students will experience in comparison to previous years, but are quick to note the zoned quiet spaces in the library that students can use. Malone said, “We want to be welcoming to a variety of users.”

As the largest learning hub on campus, according to Malone, and a place of connections, the main floor of the library was the best fit to host Peet’s. Housing spaces like the Rhetoric Center, Career Center and recently NEXUS (a peer-to-peer financial coaching center), the library is a learning space. Malone hopes that “[Peet’s] will draw students who may have been a marginal library user more readily into the library, and that will give us an opportunity to interact with students more.”

DeMey echoed Malone, saying, “What we kind of hope for is that as more people come into the library, they might find reason to stay beyond the coffee.”

According to Malone, Hekman connects people to people, ideas, and resources. “And Peet’s is really helping us do that connecting people to people aspect,” Malone said. The second floor of the library is often flooded with students, faculty, and even retired faculty. According to John Witte, Dean of Student Life, “It’s a natural meeting location now.” Commenting on the foot traffic, Malone said, “This is busier than it would have been a year ago on the third day of class at 2 p.m.”

DeMey mentioned seeing seminary faculty and students at Peet’s, which sparks another hope of connection between the university and seminary.

Malone says that there were always plans for a coffee shop in the library, even before he entered his position as dean three years ago. Witte added that the master plan had always envisioned the library as a learning commons and the idea of a coffee shop was part of that. According to Malone and Witte, the bid process had also included Starbucks and several local coffee shops, none of which were interested in having another location or franchise. Important in the selection of Peet’s was the consistency and quality of the coffee, which a franchise like Peet’s brings. Witte also mentioned Peet’s commitment to sustainability and how they source their beans as a draw to the franchise. Although Peet’s is a franchise, it is still managed by Creative Dining and has student workers, “So there’s still that strong connection with Calvin,” Malone said.

Witte notes, “[The Fishhouse] was a great thing, and it was time for something new.” Although they said it was bittersweet to say goodbye to the Fishhouse, Witte and Zachary Hartwig, a Calvin student and Peet’s barista, discussed some of the physical challenges of the Fishhouse, such as not having plumbing, and Hartwig stated that “[Peet’s] is a good set up. The physical location is really good.” According to Witte, the change was “not about the Fishhouse being deficient, but it was about relocating a coffee shop in a better place.”

Peet’s has come with its own challenges, as Sofie Cuidon, also a Calvin student and Peet’s barista, and Hartwig both state. “There’s been a lot of changes,” says Hartwig. An area of change the Peet’s employees are fighting for is a CUPPS mug discount. According to Hartiwg, the old discount for CUPPS mugs was 75 cents, and the new reduction is 10 cents.

There is hope for a continued community like students experienced at the Fishhouse as Cuidon describes, “… it created a lot of community down there and was a central place to hang out for a lot of people. I hope that that will be the same for the Peet’s Cafe, but at the moment it’s a little too early to tell.”