Missed the Calvin University dedication? Read about it here.

What once was a Dutch ministry school is now a university. 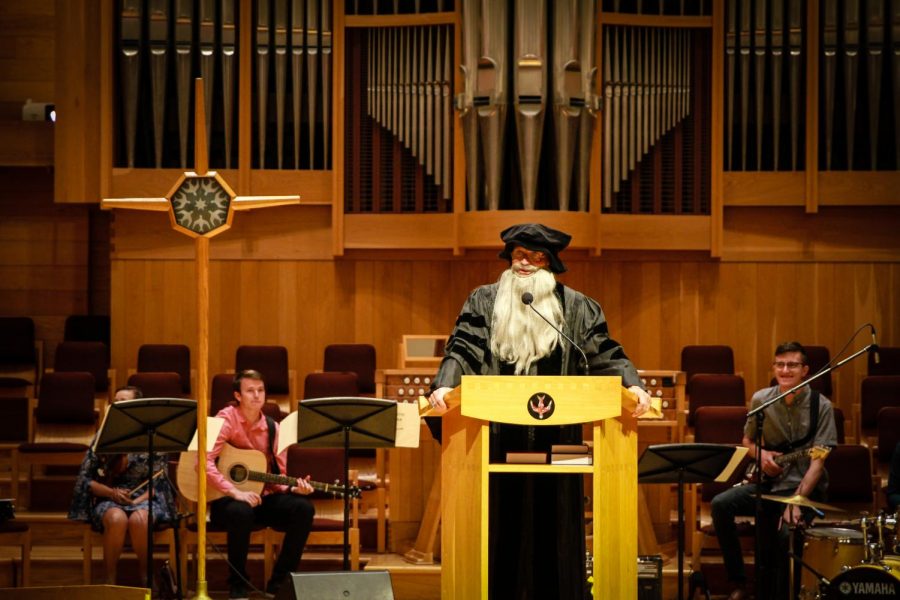 John Calvin addresses the audience at the dedication ceremony.

Shedding its title of Calvin College, the school took on the name Calvin University at the dedication festivities on July 10.

The transition date coincided with John Calvin’s 510th birthday, and was celebrated with a transition festival. The festivities started in the afternoon with a panel discussion led by five professors and administrators.

Both the Recital Hall of the Covenant Fine Arts Center and the overflow room were full. The panelists spoke on how the university vision would look like at Calvin and how it’s already taking place. They emphasized building partnerships within and outside of the university, as well as working towards “the health of the city and the healing of the world,” according to Calvin’s mission statement.

Provost Cheryl Brandsen highlighted how Calvin could be known for communicating compassionately despite strong disagreement. “When we do this work well… we witness the power of the Gospel to be a force for reconciliation in a divided world,” Brandsen said.

Following the panel, a dedication service was held in Calvin’s chapel.

“John Calvin” himself made a guest appearance after the blessing and made some brief remarks.

Then the Swiss reformer led those at the visitation service to the West Field and Lot #7 where numerous food trucks and stands served tacos, doughnuts, and other food options.

Despite high heat and humidity, roughly 2500 people attended in total, according to Juli Haga, the director of event services.

In an interview with Chimes, Le Roy expressed joy at officially transitioning to a university. Le Roy responded to criticism that Calvin no longer supports the liberal arts by emphasizing that Calvin would remain a Reformed liberal arts institution. “The liberal arts focus and the liberal arts as the foundation for all learning, that’s going to continue to be there,” Le Roy said. “That’s our strength; that’s our source of effectiveness, and we’re doing it from a Christian Reformed theological perspective.”

All photos courtesy of Rick Treur