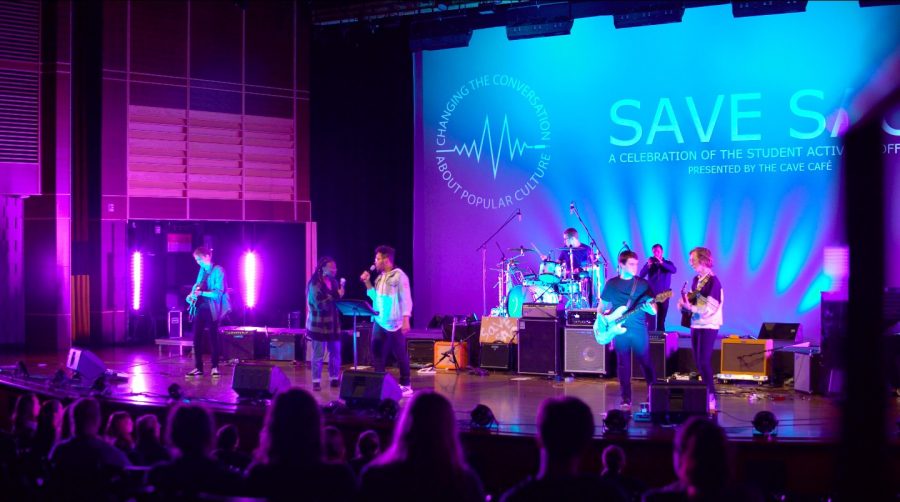 Student bands pour their emotions into performances dedicated to SAO

“This is what we do better than any other college in the country!” John “Moose” Williamson yelled as he introduced the Save SAO show on Tuesday night.

On April 17, the Calvin Tech Crew organized a performance to commemorate the work of SAO and its leadership by Ken Heffner for 26 years. As arranger Mark Townshend put it, it was to raise awareness of the work and importance of SAO, to show administrators the importance of SAO to students and to celebrate the bands that have come to Calvin over the years.

Daniel Hickey, an SAO employee who has written many discernment descriptions of bands for SAO, appreciates the work of the tech crew. “It’s impressive that they went this far,” he said.

The school night concert was sparsely attended, with people scattered throughout the mezzanine and the Save SAO spokespeople lining the front row. The crowd included Ken and Gail Heffner, and Sarah Visser.

Stephen Ng, Calvin sound technician, said “It’s weird that there are a number of people that seem to care [about SAO] but haven’t shown up.” He continued, “The lighting, the sound, the tech was incredible, I just wished more people came.”

The night began with Williamson jumping to the stage with a full suit and Adidas sneakers.

“We’re here to save the SAO!” he shouted. Williamson touched on Ken’s theology of engaging God’s world by conversing with groups outside of the Christian identity. Williamson especially wanted to highlight the track record of SAO.

“People working the music industry would be amazed….Unlike any venue, the artists talk about their art after concerts.”

The night consisted of performances by Schultze Blues Band, Satie, Mannhattan and a cover group made up of students and alumni. Each of the student bands have directly benefited from the Pop Music Guild and the encouragement of Heffner. The stage, lined in a sea of different amplifiers, lit the way for the ruckus blues, R&B and rock bands.

The audience started clapping during the Band’s intro right off the gate. Red guitars strapped the gentlemen cranking out blues, accentuated by flashing blue lights on each side of the stage. Nate Lefebre played juicy licks and ‘waka waka’ guitar riffs of Hendrix’ “Voodoo Child.”

Next, Jason Entingth told the audience how he promotes SAO activities to students and parents during tours for admissions. “Parents want to know that students don’t just run away on the weekends,” he said.

“For your enjoyment!” the extravagantly dressed Sam Mann yelped into his Elvisesque Shure microphone to jumpstart Mannhattan’s set. Mannhattan brought energy to the stage with their song “Neon Nights.” Manhattan led the audience in singing “We’re Not Gonna Take It!,” a possible cry to the administration. This drove some people to dance in front of the stage.

Royce Lloyd, drummer from Manhattan encouraged, “We hope the love and support shown for SAO tonight reflects its love on students tonight.”

A special band made up of familiar Calvin faces performed some covers. Once again, Heffner was congratulated for his excellent work, this time resulting in massive applause.

The compiled band performed their version of Billy Joel’s “Miami 2017,” though with some changed lyrics to fit the Save SAO theme. “Seen the lights go out at Calvin, I saw the Empire State laid low,” they sang.

For the last song, all the bands came out with additional violinists and horn players to perform “Let It Be” by The Beatles. The passion embedded in their singing showed their concern for the message of Save SAO.

People like Patrick Jonker, who have worked for SAO for years, commented, “I’m glad that people are still getting together and still care.”

The most talked about individual that evening, Heffner, had this to say with a glimmer in his eye: “It was good, very good!”

Learn more about the Save SAO movement here.