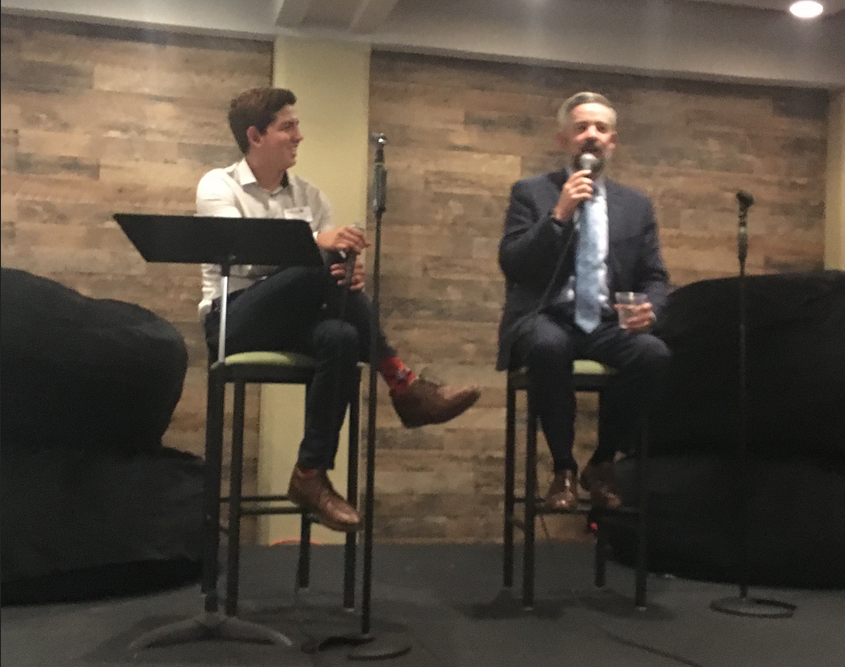 In the midst of losses due to budget constraints all around the college, President Michael Le Roy shared thoughts on the community’s values of cultural engagement, creation care and diversity at Tuesday’s town hall meeting hosted by student body president Edgar Aguilar.

Aguilar opened the meeting with a few icebreaker questions for Le Roy, including “Pepsi or Coke?” to which Le Roy answered, “LaCroix.” According to Aguilar, Calvin’s partnership with Pepsi is coming to an end, hence the question.
Cultural engagement
Over the past week, prominent student voices in the Save SAO movement have been meeting with Le Roy and Sarah Visser, VP for student life, to discuss possible avenues for raising funds to continue the work of the student activities office (SAO), according to senior Patrick Jonker, who shared briefly at the town hall.

Asked about what he has learned through the events of the Save SAO movement, Le Roy stated that he was able to see beliefs he held confirmed regarding the importance of the work of the SAO in students’ learning.

Aguilar then opened the floor for others to ask questions.

One student, concerned about lower attendance at campus events, asked how communication about events could be improved. He suggested a student website as a place where people could check for upcoming events.

“We have been looking at technological applications [for communication]… but they’re expensive,” said Le Roy. “We haven’t solved that one yet, but I agree that it’s needed.”

Le Roy noted that the rise of privatized entertainment and the inundation of information were factors to consider about lower attendance at campus events, a trend he observed was happening nationally. Le Roy added that on a given day, there are about 40 events not related to class happening around campus.

“There are times when I have a meeting canceled… and I would actually love to go sit in on a lecture or see something that’s a part of our community,” Le Roy said.

Another student asked about how Calvin’s administration could get ahead of the conversation about budget and shepherd the community through its losses. Le Roy responded that it was something he thought about often, and said that while it was fair to ask people what they value, it’s not fair to ask the community to choose between them. He mentioned accreditation as an example of something people might not care to have money invested into until it’s lost.

Asked about offering greater transparency with administrative decisions, Le Roy said he believed the faculty was kept informed on general matters but that things could be better, particularly with students.

In regard to the SAO situation, Le Roy explained, “My understanding when Sarah [Visser] and Ken [Heffner] talked, and Ken was going to be talking to students, was that that conversation was going to begin. And that’s not how students perceived it.”

Le Roy suggested in particular RAs (resident assistants) as student leaders who could start dialogues with other students about certain issues.

“We believe in empowered student leadership,” he said.
Creation care
Le Roy also cited the role of students in the college’s sustainability initiatives, such as in designing the new commons union building. According to Le Roy, the plumbing in the Commons building is aging to the extent that it won’t work someday, which is why they are looking at “making spaces that will work… spaces with fewer square feet,” which will use energy more efficiently.

“Consume less” is a strategy they’re looking at, since most of the energy the Midwest uses comes from coal, some of the sustainability options available are not as low-hanging fruit as they are in other parts of the country. Consuming less could mean moving all night classes into one building, to save on electricity being used to light up other buildings, Le Roy suggested. He also mentioned that Calvin is in an ongoing conversation with The Rapid, Grand Rapids’ public bus system, about improving mass transit from the campus to the city.

Le Roy pointed out that Calvin has switched to using compostable dining materials. Though a student pointed out that Calvin does not yet have compost bins, Le Roy affirmed that Calvin is reviewing a proposal to move toward zero waste. In the meantime, the compostable dining materials will at least decompose in the landfill.
Diversity
When Aguilar asked about how Calvin could be a more welcoming and inclusive place for students who are religious minorities, Le Roy shared that when there has been anti-Muslim rhetoric in the news, he has reached out to Muslim students at Calvin to say that “we love and value them because they are made in the image of God.”

“We should be willing to sacrifice our lives for their wellbeing,” Le Roy said. “Jesus didn’t just die on the cross for people who believed in him, but in the hope that all people would.”

Aguilar shared a concern that eligibility for on-campus roles might be contingent on holding to the Christian faith, which affects religious minorities. Le Roy acknowledged that this was tricky because of the college’s Christian commitment, and stated that while not all on-campus jobs require a commitment to the Christian faith, key leadership roles do expect it, since they are bearers of the school’s mission.

Aguilar also brought up a concern from LGBTQ students about how faculty may not feel they can transparently communicate what they believe about same-sex marriage if they support it but cannot publicly endorse it. Le Roy answered that faculty can explain different points of view and engage students critically and thoughtfully where relevant, without disparaging the CRC’s view — that same-sex behavior is sinful while same-sex attraction is not.

“What we are committed to doing is to remain in dialogue about it, continuing to seek to be faithful in the teachings of the church and to engage the big questions of the day,” Le Roy said.

Aguilar closed the meeting by saying that student senate would soon be releasing a document about research they’ve been doing this semester about religious minorities, environmental sustainability, what the college is doing about them, and what students think might be missing. He encouraged everyone to engage with the upcoming document and follow up with senate about any ideas and concerns.