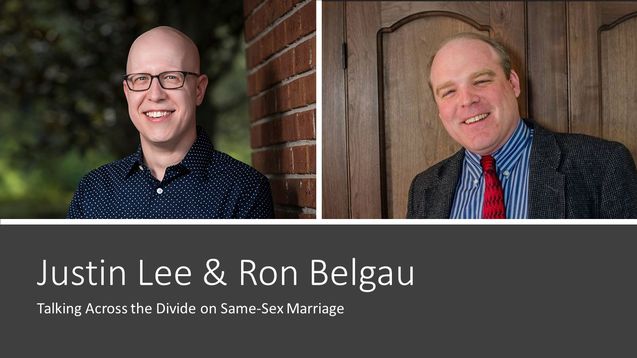 The ongoing controversial question of whether or not same-sex marriage is compatible with Christian doctrine was the spotlight of Tuesday’s Sexuality Series event: “Talking Across the Divide on Same-Sex Marriage.” Two openly gay Christians who have different beliefs about biblical teachings on homosexuality spoke at the event. Ron Belgau and Justin Lee practiced respectful dialogue on their diverging views as part of an event on Tuesday, Feb. 5, which was sponsored by the Sexuality Series and other on-campus groups.

Belgau believes that gay Christians, while loved and accepted by God, are called to be celibate, as he himself is. This is also the position of the Christian Reformed Church and Calvin College. Lee, although not currently in a relationship, supports Christians marrying same-sex partners.

Belgau also acknowledged that same-sex marriage is a divisive issue within the Christian church, and that serious theological differences exist.

“Justin and I do not want to downplay the seriousness of our disagreement,” he said. However, the main takeaway from their talk was that people with opposing viewpoints can have respectful dialogues about those differences. The event was intentionally not a debate, although both men shared the theological basis for their beliefs. Belgau and Lee gave advice about how to communicate disagreements.

“One of the most important parts of dialogue is stories,” Belgau said. Both men shared parts of their stories, which were similar in that they both struggled with acceptance in Christian homes and the tension between their sexual orientation and faith.

“It wasn’t until I was 18, after many years of crying myself to sleep, begging God to make me attracted to girls, that I accepted that I was gay,” Lee said.

Lee also pointed out that listening is important to dialogue. Belgau’s advice was to “put the relationship first” when encountering disagreements and to focus on friendships over faceless controversial lecturing.

Lee, who affirms gay marriage, noted that Christians once read the Bible as approving slavery because of a lack of careful cultural interpretation, and compared it with the church’s treatment of LGBTQ+ people.

“The good fruit of same-sex couples contrasted with the bad fruit of the church’s history speaks for itself,” Lee said.

Belgau also gave his side, noting that friendship is highly valued in scripture, but not so much in today’s culture, which primarily focuses on romantic relationships. Speaking about celibacy, he said:

“The proper context of this is not the no’s of the law, the covenant, but saying yes to vocation: either marriage, which I understand as between a man and a woman, or celibacy.”

He too noted the divisiness of this issue, saying, “both of us have come under pressure from those who agree with us to denounce the other person.”

Belgau and Lee finished up their presentation with a projected slide that read: “GRACE.”

Reactions to the talk from the Calvin community were positive. “It gives me a whole lot more to think about,” said sophomore Esther Berkompas.

First-year student Mikayla Bavaro praised the lecture, saying, “I thought it was very insightful. They disagree wholeheartedly, but are still wholeheartedly friends.”

“This is something we’re all talking about, so learning from people who have figured out how to [talk about it] well is important,” said Pastor Mary.

Julia Smith, director of the Sexuality Series, echoed that sentiment, saying, “at Calvin, it’s in our DNA to explore hard questions.”