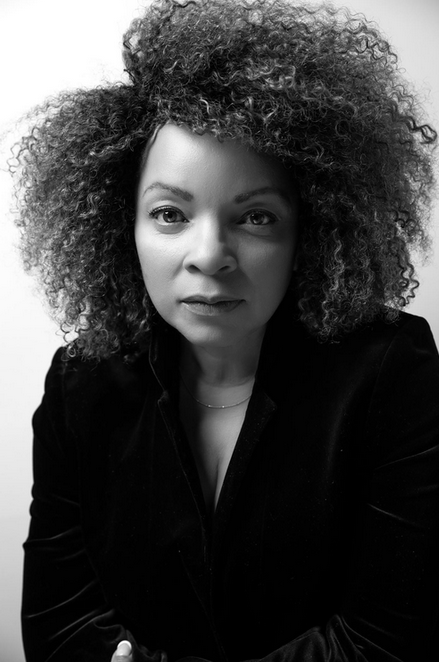 Calvin College heard from Black Panther costume designer Ruth Carter at the January Series on Friday Jan. 18. Carter told the story of her work dressing the inhabitants of the fictional African country Wakanda, which is central to the Marvel movie Black Panther. Shortly after her visit to Calvn, Carter received an Oscar nomination for her work. In addition to lecturing at the series, Carter spoke to the Inside the January Series class, and the Merze Tate Explorers, a group of girls from local schools.

Carter shared with Calvin the values that guide her work as a costume designer. She told her audience that she has three mantras: “Know who you are” “Have a purpose” and “Do the right thing.”

“I never try to delve too far from history because people take movies so seriously,” Carter explained. “They become like the truth.”

She pointed out that this principle of historical integrity is especially true when designing films about minorities.

“Authenticity is super important to me,” Carter continued. “Especially since I do a lot of black history. You can’t mess around with people’s lives. There’s somebody who cares that this story is accurate.”

Black Panther was Carter’s first afrofuturist film; yet the concepts of African design are not new to her. “I always put African culture in my films,” she said. “Sometimes it’s just the color palette that feels African.”

Besides the panther suit, the costumes Carter is perhaps most famous for are those of the Dora Milaje, the female fighting force of Wakanda. In the movie, they are depicted as elite and powerful warriors, but Carter revealed that this wasn’t always the case.

“The Dora Milaje in the comics were a little more risque,” she said. “Ryan didn’t want to go there. He decided that these warriors would have their feet solid on the ground and their vitals covered.”

During her talk, Carter divulged that  the Dora Milajes’ uniforms are the costumes she is proudest of creating, because they were specifically designed not to objectify the actresses. She made sure to make the outfits practical armour.

“It was totally a female inspired costume,” Carter said. “They were badass, but still very beautiful.”

Explaining a little more about the costume, Carter commented on its authenticity, saying “The tabard was beaded in a traditional way with real African beads.”

Since this was Carter’s first Marvel movie, she had to make a transition to a new type of design and a new workplace. She discussed how her job interview was somewhat nerve-wracking.

“Marvel is like the CIA—it’s pretty intimidating,” Carter said with a laugh. When she got the job and started work on the costumes, she realized that she would have to blend several things together.

“We were using culture and tradition of Africa in a superhero context,” Carter explained.

Carter shared her inside knowledge of Black Panther costumes. She revealed that the Queen Mother Romonda’s headpiece is based of the Isicholo hats of the Zulu people. Because of its unique shape, she had it 3D printed.

Carter also told her audience that the Black Panther suit took a lot of work.

“The toughest costume to make was the Black Panther because he not only had to be a superhero, but an African king,” she said, explaining that if audiences look closely they can see a triangle pattern all over the suit, which is based on the sacred geometry of Africa.

During the Q & A after her talk, Carter addressed a question that people have disagreed about since the movie came out: Is it ok for white kids to dress up in Black Panther costumes?

Carter believes there is nothing wrong with that because “when kids put on the Black Panther suit, they are hoping for the magic. It has nothing to do with color.”

Speaking about the cast of Black Panther that she worked with, Carter talked about her warm relationship with all of them. In particular, she mentioned Lupita Nyong’o, who plays the spy, Nakia, in the film.

“I love Lupita,” said Carter. “She had so many costumes and was always in disguise. Every time I turned around she was something different. I got close to her because of so many fittings.”

While Carter has become best known for designing the superhero costumes of Black Panther, she also values her other work, particularly dressing the cast of black history focused movies. She doesn’t count Black Panther as her only superhero movie.