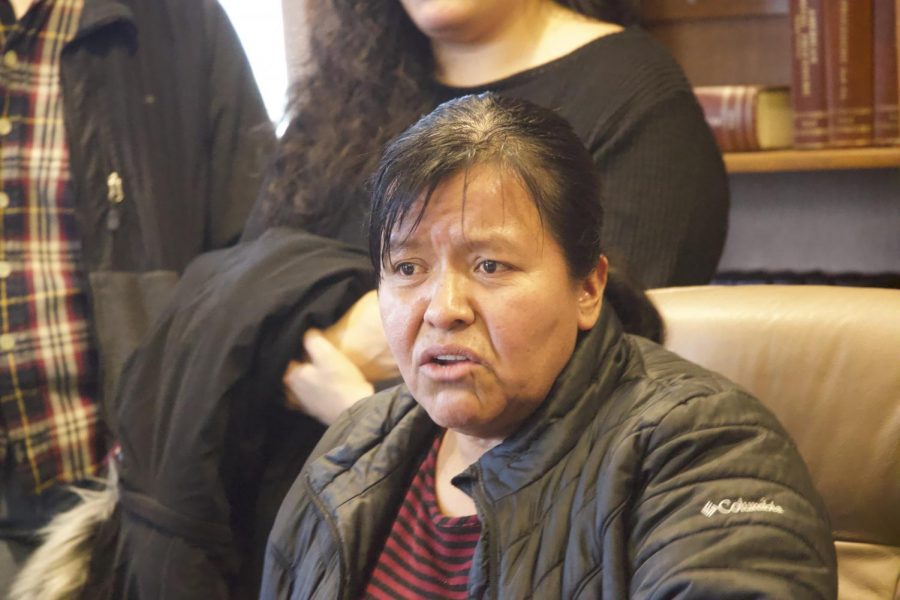 Maria Gomez, Jilmar Ramos-Gomez's mother answering questions about her feelings to her son being taken into custody.

Jilmar Ramos-Gomez, a military veteran and citizen of the United States, was nearly deported by U.S. Immigration and Customs Enforcement (ICE).

An investigation of the actions taken leading up to Jilmar’s detainment by both ICE and the Kent County Sheriff’s Department and the reasoning behind them is being requested by the family and American Civil Liberty Unions (ACLU).

Hillary Scholten, one of Ramos-Gomez’s attorneys, mentioned that there have been various veterans contacting them in support of Jilmar and his family in regard to the events which took place in December of 2018.

Miriam Auckerman, senior staff attorney with the ACLU of Michigan, commented on the reasoning behind the investigation.

“We’re asking for an immediate investigation,” said Auckerman. “We’re asking that the Kent County Sheriff’s Department respond to the community, respond to the family, respond to everyone who is outraged by the fact that a US citizen, Marine combat veteran was turned over to immigration and customs enforcement and explain how this could possibly happen.”

Ramos-Gomez was in the custody of the Kent County Sheriff’s Department because of two misdemeanor charges in early December related to an incident at Spectrum Health Butterworth Hospital. According to court ruling, he was supposed to be released from jail pre-sentencing on a self-recognizance bond but was instead handed over into the custody of ICE per their request on Dec. 14.

The family and their lawyer, Richard Kessler who is based in Grand Rapids, were able to provide documents, such as copies of Jilmar’s birth certificate and military papers, which proved he was United States citizen.

Ramos-Gomez served one tour in Afghanistan. During his time there he worked with tanks and was involved in active combat.

Jilmar was released from the Calhoun County Jail on December 17th after spending three days in ICE’s custody and after going through the beginning of the process for deportation.

A press conference was held on Jan. 16th regarding these events. Jilmar’s mother was present as well as his attorneys and friends.

At the time of his initial arrest after the hospital incident, Ramos-Gomez had proper identification on his person which the police were shown but didn’t take action about.

His mother, Maria Gomez, spoke about how mad this made her and that she simply wanted answers too.

Later on in her statement, she said, “They have to explain why they did this. Why don’t they accept proper identification? That’s my question.”

In terms of seeking answers about this situation, Chimes did contact Kent County’s Sheriff’s Department for comment but were told we would have to file an FOIA, or Freedom of Information Act, in order to get information from them.

While the Sheriff’s Department was not willing to give a comment, many advocacy groups are commenting on this issue. One specifically at the upcoming Kent County Commission meeting.

Movimiento Cosecha GR, a non-violent movement across many states in the US that advocates for immigrants, will be at the Kent County Commission meeting on Jan. 24th asking that Kent County “end the contract with ICE” according to the event on their Facebook page.

Gema Lowe, a volunteer organizer with Movimiento Cosecha GR who was at the press conference, gave a very forward-looking statement in regard to these events.

“As an immigrant rights movement, this episode, no mind cannot compensate to what it is,” said Lowe. “But we can continue forward by ending the contract and stopping this inhumane treatment and the suffering and something that shouldn’t have happened.”

With the support of advocacy groups like this one and veterans from the West Michigan area and beyond, the family and their legal team will proceed with the investigation.

Miriam Auckerman commented on what steps they will take now that they have gotten more of a voice at the press conference.

“We want to first investigate what happened here and then accountability, I think, at a bare minimum, means taking responsibility, ending a failed policy, apologizing to the family and remedying what harm was caused.”