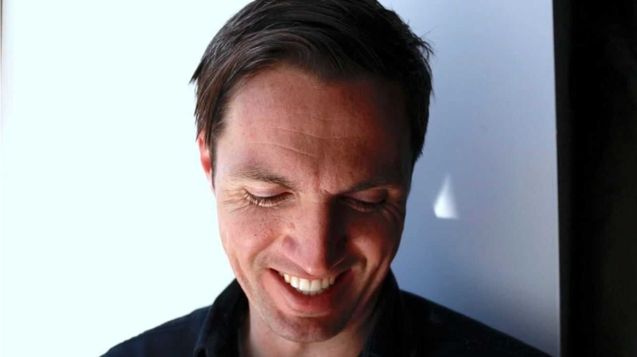 Low Lumens provides a live performance unlike anything of its kind. Danny Bracken, the one-man-band behind Low Lumens, uses visual projection and live music to offer audiences a multi-sensory experience.

Bracken performed the entirety of album “The Distant, Everyday,” with some improvisation mixed in, on Friday, Nov. 30 in the Recital Hall.

The songs on the album have a slow yet steady pace with an underlying energy that aches to break free. Low Lumens is appropriately named: the songs are not dark in the sense that they touch on dark themes; instead they are obscure, so listeners wish Bracken would shine some light on the subject of what the dimly lit songs mean.

Bracken uses sparse equipment to create his multilayered soundscapes. Instead of a band’s worth of instruments, his footprint was that of the average D.J.’s. He stood playing a few digital synthesizers that were hooked up to controllers and a Mac, occasionally interspersing some hums or sung parts into the mix. Bracken leveraged sounds of bells, organs, bass, pianos, synthesizers and rhythm instruments.

However, that’s only one side to the story. “There’s interaction going on both ways, both visually and sonically,” said Ken Heffner, student activities director.

Bracken’s music was accompanied by unconventional images in the form of projected video. Bracken manipulates video while making music, adding colors, shading and other effects. Clips are not a set length but can be adapted to fit how long the songs end up being live. Songs with driving rhythms were always accompanied by spinning visuals. As the feeling of the melody changed or new instruments were introduced, often the colors of flashing light would change.

The interactions of image and sound were mostly complementary. For instance, bass swells or electronic beats could be matched by swells of light or flashing webs of light.

The texture of the sound seamlessly corresponded to the texture of the images. Metallic drum beats accompanied smooth metallic images of objects. Heavy, menacing note progressions sunk audience members down into the depths of the sea.

Many scenes left the audience wondering what exactly they were looking at. One scene at first looked like part of a ship, then lots of scrambled sticks, and then the pieces formed into a shed. Another scene featured a glass box spinning with the landscape. The box lit up different colors, but as it got closer, condensation appeared, and inside were a variety of ferns.

The show in fact was three-dimensional. As the audience weaved through stone formations, the stereo effect made it seem as though sound was bouncing off rocks to one’s right or left.

The combination of music and images allowed for an emotional experience. The hope mustered by rising orchestral arpeggiations and cheerful major melodies followed the hope shown in the visuals. At one point, a burnt-down forest became illuminated, and a single vibrant tree towered above the remnants.

After the show, Ken Heffner sat down to ask Bracken questions.

One audience member wondered about the significance of the imagery. Bracken explained that the images which sometimes look human, sometimes natural, follow the theme of how it is difficult for people in this day and age to connect to nature with the the technology they have at their fingertips.

Someone questioned Bracken about why he does what he does. “There’s a sense of openness that I really like about music like this,” he replied. The music all seems to exhibit a bittersweet essence. “In a lot of the work I’ve been doing, I’ve been trying to live with this tension of a world in deep despair but also with lots of beauty.”

Low Lumens’ landscapes draw listeners and viewers to distant landscapes of the past and to old or present memories. Experiences and emotions differ for everyone with each live performance since the songs are continually morphing. Low Lumens’ musical experience provides listeners something at first unfamiliar but then very relatable.