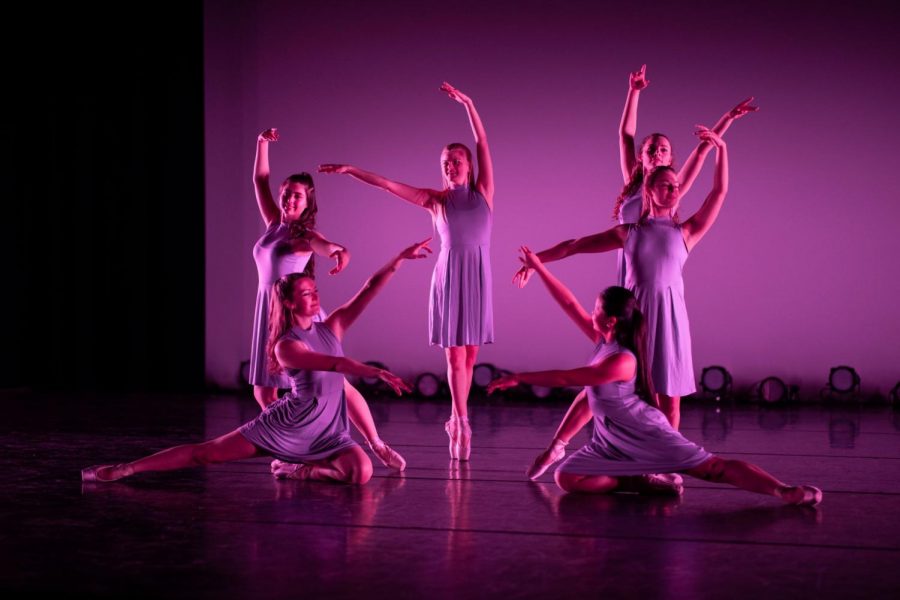 From “dad” dancing to a Christmas kickline to ballet to hip hop, Calvin students showed off an eclectic and exciting variety of dances this weekend at the fall Dance Guild performance.  Entirely student-led and choreographed, Dance Guild is Calvin’s largest group that is solely organized by students.

Each semester, more than 300 people are involved in dancing or leading the various acts. And since choreographers can suggest new dances, each season brings new ideas. With 28 acts, this fall’s performance boasted a myriad of colorful dances, including Latin Beats, swing, ballroom, contemporary, funk, jazz, broadway, tap, modern and more.

Yet as fun as it is, Dance Guild is only made possible by a lot of hard work and practice. “I’ve learned to be patient with people,” remarked Carly Brooks, choreographer for this semester’s Guild Coed Hip Hop section.

“Teaching a Guild is sometimes difficult because you have the most number of people on stage and it’s also the beginner level so you have to make the dance so that everyone can do it.” For Brooks, the positives far outweigh the challenges. “[It’s] been difficult at times, but overall I really enjoyed it, and seeing how everyone on stage is having a good time, I think that’s all that really matters.”

Despite being two hours long, the diversity of the dances and energy of the performers kept the audience on the edge of their seats the entire time. While the hip hop groups had everyone cheering, the pointe and contemporary performances had them holding their breath. Small touches like pulling out actual letters during advanced ballroom to illustrate the lyrics of the song added an extra layer to the show.

“My favorite part about Dance Guild is probably dress rehearsal,” Brooks remarked. “You’re in a huge room with everybody that’s been practicing for two and a half months on their dance and seeing everyone’s work at the end — and they’re all cheering for you when you first run through it.”

On the other hand, sophomore and dancer Katie Brooks highlighted performances as her favorite part of being involved.

“Coming in, I wasn’t really thinking about doing a lot of performances because I’m very introverted and I’ve never really liked performing in front of people,” she said.  “Doing Dance Guild every semester [has] really helped boost my confidence and my abilities.”

Above all, perhaps the largest takeaway for viewers was a sense of the talent and joy expressed throughout the performance.

“It was less like, ‘you have to be good’ and more like, ‘let’s just do it because we love dancing,’” Katie Brooks explained, noting that the best part of being in Dance Guild was the community and the pure fun of performance. But the dancers were certainly not lacking in ability.

“I’m just so impressed by literally everyone,” remarked Selena Walters, junior and social work major. If the applause at the end was anything to judge by, the rest of the audience felt the same way.