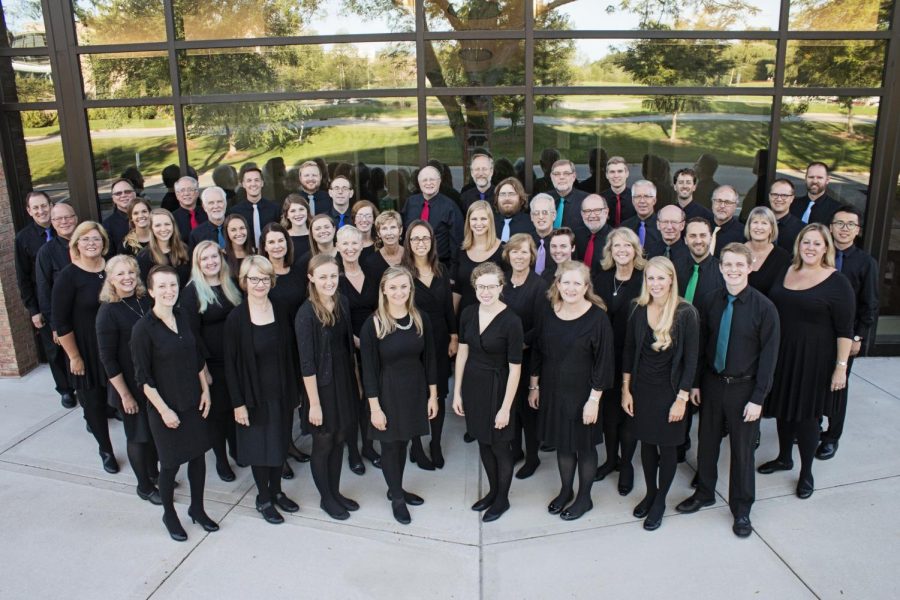 For these singers, the music doesn’t have to end at pomp and circumstance. The Calvin College Alumni Choir, with a national reputation and many impressive achievements, gives Calvin alumni a chance to continue singing in a choir of high caliber after graduating.

Alumnus Helen Hoekema VanWyck founded the choir in 1977, along with seven other singers who didn’t want to give up being in a choir after graduating. The choir has grown from the original eight to 55 members — and one of the original eight, Cindy Vandenburg, is still in the choir.

Members are admitted by audition, and current members must re-audition every other year. Members are local to West Michigan, as the choir meets once a week for a two hour rehearsal.

The alumni choir board president, Cindy De Boer, who graduated in 1983 and currently works as the administrative assistant for the Calvin Institute of Christian Worship as well as for the congregational and ministry studies department, said there is a variety of people in the choir.

Current members range from alumni from the 1970s to 2018 graduates; in order to qualify for the choir, members must be alumni of the school. This past year, over ten new members joined, almost all new graduates, De Boer said.

The choir is not technically under the music department or alumni association, but De Boer explained it is friends with both. The choir also has a good relationship with the school.

“We’re very grateful for our long-standing relationship with the college,” De Boer said, also commenting that the choir is blessed to be allowed to use Calvin’s facilities.

The choir has created a national reputation. It was invited to perform at multiple conferences for the American Choral Directors Association, including at the 1985 National Convention in Salt Lake City. The choir also won third place in the American Prize competition in choral performance in 2010 and performed at the Templeton Prize ceremony honouring Dr. Alvin Plantinga.

“Part of the responsibility of having a national reputation is also realizing that we are representing Calvin College,” De Boer said. “Our singing certainly is to glorify God, but it is also to reflect how we were trained here at Calvin.”

This year is a year of transition for the choir. Dr. Pearl Shangkuan, a Calvin professor in the music department, directed the choir for twenty years, starting in 1998. However, she stepped down this past year, and the choir is now searching for a new director.

The choir will have three different interim conductors this year, each directing for a third of their season. From September until their first concert, the choir is being conducted by their assistant conductor Randy Van Wingerden. During the second part of their season, they will be directed by composer Roy Hopp, also a long time member of the choir. For the spring concert, the choir will be directed by composer and Calvin adjunct faculty Sean Ivory.

“We’re very excited to have three really enthusiastic and good directors to be our directors this year, and then we have a search team in the process looking for a new permanent director,” De Boer said.

This year, the choir will no longer be charging admission to their two concerts, but will instead be taking up an offering. As the choir is self-funded, relying on concert admissions and patrons, De Boer said not charging admision is a leap of faith for the choir. However, this will allow the choir to reach a greater audience.

“Our number one goal is to share our music and to glorify God with our music,” De Boer said, “and we don’t want that cost of a ticket to stop anybody from being able to hear us sing.”

Their fall concert, on Saturday Nov. 10, will take place at the Covenants Fine Arts Center, and the spring concert will take place at Basilica of St. Adalbert in downtown Grand Rapids. In between the two concerts, the choir will also help sing at three worship services, at Ridgewood CRC, Eastern Avenue CRC and Shawnee Park CRC. De Boer explained that at the worship services, the choir will perform choral music and lead the congregations in worship.

The choir has also gone on tours. Their most recent tour, in the summer of 2017, took the choir to France and Switzerland, where they performed in an international festival. Over the ten days of the tour, they were also able to tour many French cathedrals — including singing at Normandy. At two of the cathedrals, they sang composer Dan Forrest’s “Requiem for the Living,” and Dan Forrest joined them for the tour.

The choir also toured Asia in 2000, where they went to multiple countries, including Japan and Malaysia.

The choir sings a range of choral music, ranging from “Renaissance music to music that’s been composed within the last few years,” said choir member Abby Brinks, a 2017 graduate on the development team for the choir. The choir has also commissioned new works, as well as releasing many recordings. Their latest recording, released in 2010 and titled “Sacred Space,” includes 15 songs from the choir’s concerts. Some recordings of their performances are also available on iTunes.

The choir allows for alumni to continue using their gifts in even after graduating.

“Going to Calvin in my four years here, I was grateful to be able to sing in some of the choirs here that were of a pretty high caliber, especially for a liberal arts college,” Brinks said, “and then to also have the opportunity to continue after graduating is a really unique one that I’m very grateful for.”

The Calvin College Alumni Choir will have a free concert on Saturday, November 10, at 8 p.m. in the CFAC Auditorium.