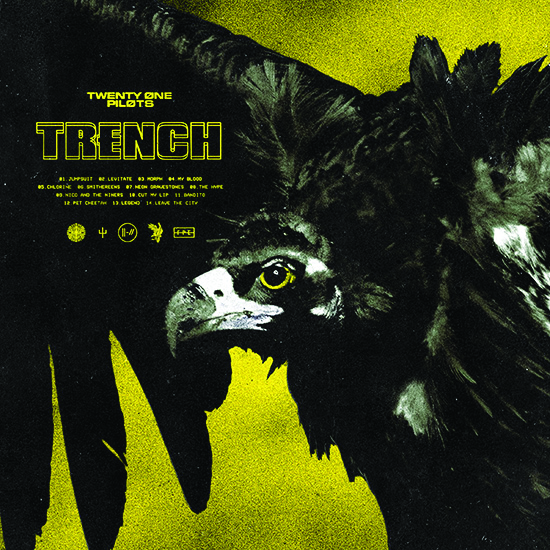 Twenty-One Pilots was one of the first bands I seriously listened to in high school that approached the genre of hip-hop, and for a while I was enamored. Over the next couple years, however, I became disillusioned with the band and considered them vastly overrated. I mostly stopped listening to their music.

When album “Trench” came out on October 5, I decided I would go back and listen to the old albums again before hearing the new one. My conclusion was that Twenty-One Pilots isn’t as bad as I had once thought, but they do have some weaknesses. They can be hit or miss, for sure, but they’re getting better, and “Trench” is a huge leap forward.

Twenty-One Pilots has always had the capability to write great hooks. “Lane Boy,” “Ode to Sleep” and “Isle of Flightless Birds” from their previous three albums have interesting hooks, which would lead you to believe that Twenty-One Pilots understands, to some degree, what comprises a good hook. Unfortunately, there are only a few songs on each album like this, and sometimes the lyrical and musical quality don’t exactly match. For example,“Guns for Hands,” the lyrics of which deal with a heavy, important topic, and which has a decent sound overall, starts with a hook that I can only describe as “dopey.”

In general, the last three albums are collections of mediocre songs with some decent ones mixed in, and this number increases with each subsequent album.

Fortunately, “Trench” is about 50 percent good songs, and the band seems to have become more aware of what their strengths and weaknesses are in terms of sound and genre.

The last few albums toyed with a number of differing sounds, to mixed success. The sort of edgy, alternative hip-hop style that features in songs like “Fall Away,” “Car Radio” and “Ride” seem to be the band’s most comfortable sound. These songs have a healthy mix of tight percussion, synthesized audio effects and well-produced vocals which combine with creative song structures to make the sound that is both the most cohesive and the most characteristic of Twenty-One Pilots as a band.

They return to this style in almost every good track on the new record, combining it with the flavors of alt-rock and heavy bass which were also successful on previous records. The first two tracks on the album are energetic, thick-textured songs with just enough variety in form to stay interesting without losing momentum and with lyrical density that allows lead vocalist Tyler Joseph to show off his ever-improving flow.

These tracks are followed by a couple of medium-paced songs which serve as contrast to the previous two in both mood and genre, substituting a hip-hop style element for a more alternative rock/pop one. Joseph also displays his stylistic vocal range for the first time on these tracks, showing with simple melodies that he can sound good in his middle range as well as his falsetto.

The next few tracks are where I believe “Trench” loses some of its momentum. While they retain much of the creative sound variety and high production value, they seem to lose overall cohesion, and as a result sound uncomfortable and unnatural. This problem lies partly in the lyrical content, which becomes especially conspicuous as the texture thins out compared to previous songs.

Twenty-One Pilots has always had an issue with heavy-handed metaphors and painfully overt symbolism, which is often at odds with the depth and nuance of the topics they address. This problem resurfaces prominently in these later songs, accentuated by a few key references to a fictional narrative written along with the album, which you have to do some digging online to understand completely. This is an interesting idea for creating intrigue around the album and its themes, but in practice it becomes an obstacle in the way of deciphering the thematic intent of the songs, which wasn’t particularly sophisticated in the first place.

Additionally, some of these songs suffer from a recurring issue that I first noticed in “House of Gold” from “Vessel,” namely an excess of repetition. I understand that repeating lyrics is an important musical device, and is even intrinsic in the idea of the chorus, but when the repeated section takes up too much of the song, or is repeated too many times in a row, it starts to become stale and quickly loses its meaning (see “Bandito” and “Leave the City”).

Still, I think “The Hype” and “Legend” are some of the better tracks on the album, and there are hints in every song that Twenty-One Pilots is on the verge of refining a good sound in some of these less comfortable genres.

Overall, the music of Twenty-One Pilots is a much more accessible entry for young music enthusiasts into some of these deeper themes (mental health, struggles with faith, etc.)  than a lot of the current mainstream hip-hop, and it explores melodic and harmonic options in ways that very few other hip-hop artists do today. Undeniably, Twenty-One Pilots deserves credit for both of those things. I just hope that they’re able to continue the upward trend of this album, and continue to make songs that adhere to the standard of their best work. I know I personally will be adding at least a few songs from “Trench” to my rotation for the next few weeks