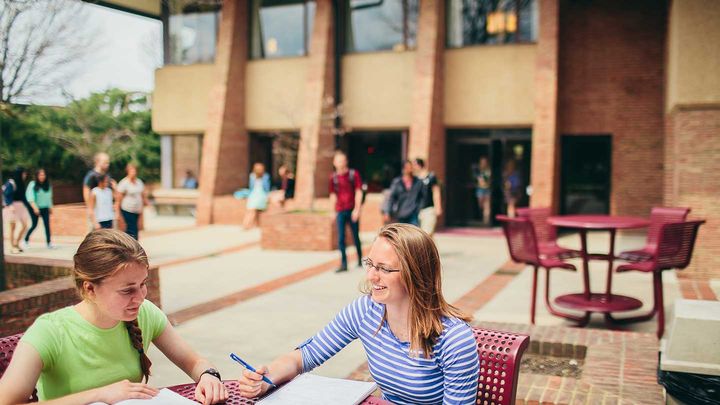 Centerbrook Architects is taking on the design and construction of a new campus union space, as envisioned in Calvin’s 2015 Master Plan.

In an email to all students, vice president for student life Sarah Visser wrote, “we envision this new building as the “living room” of Calvin’s campus… we intend for the building to provide space for student programming, small spaces for studying and community connection (i.e.- “sticky spaces”), large meeting areas, and innovative concept dining. Additionally, the new building will allow people to enter from several sides and will extend a welcoming presence.

Visser’s email also mentioned, “we are in the early planning stages and project completion is likely several years away.”

A design team from Centerbrook Architects was in Johnny’s from Monday to Wednesday the week of 15th engaging with students and receiving feedback from the Calvin student body about the current spaces on campus.

Jim Sukenik, a member of the team of architects from Centerbrook, commented on the vision and development of the project.

“The greatest outcomes are where you have a student-focused process that works to understand the campus community — what’s special about Calvin, what makes each student’s experience at Calvin rich — and what you’re trying to do is create a building that amplifies that, that actually makes the things that you like about Calvin feel even better.”

Mark Harter, another member on the Centerbrook team, said that they have gotten significant feedback from students, staff and faculty through their pop-up table in Johnny’s, as well as a workshop with 50 students, faculty, administrators and alumni, and meetings with focus groups.

“We’re doing our homework. We’re learning from everybody,” said Jim Childress, the 3rd member of the team. “That’s why we’re here getting input — trying to get people a way to give us that input through the survey or how they travel through the campus or the spaces they like.”

Students expressed their desire for more natural light, a space made for simultaneous studying and socializing and having more outdoor views from inside buildings.

The conceptual design, as part of the workshops, will be completed in January. After that, with fundraising, there will be one year of designing followed by two years of construction.

The original idea, which was proposed by the Board of Trustees, was to tear down the Commons building completely and have a new, separate building next to the Covenant Fine Arts Center. However, Childress commented that the design team proposed that they rethink that approach.

“We don’t know yet, we haven’t made that decision yet. We’re all going to think about it together, but we’ve all said ‘No, let’s keep our options open and see what’s the best thing to do.’”

Harter commented on the impact this new student center or union will have on the Calvin community in the future.