The billionaire philanthropist invested in the institutions that both raised and criticized him. 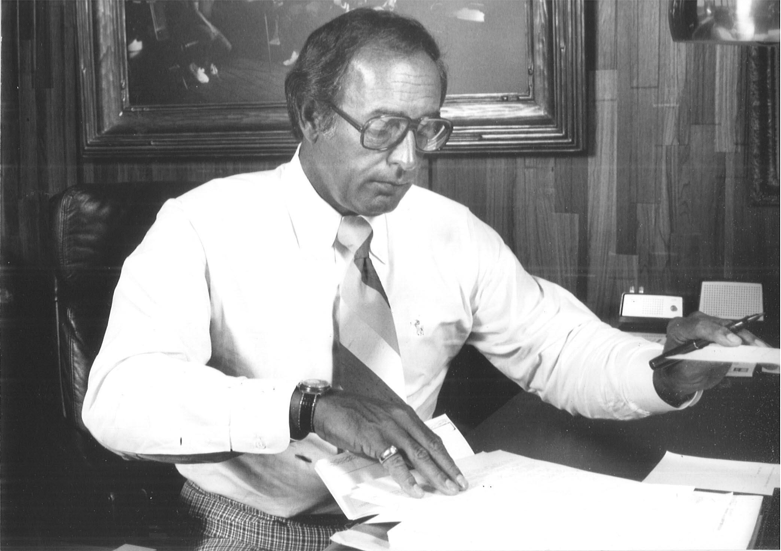 Although DeVos' time at Calvin College lasted less than a semester, he would return to the campus to present at the January Series. The college would also be the recipient of donations from DeVos, hence the christening of the DeVos Communications Center.

Richard DeVos passed away on Thursday morning at age 92. According to his family, he died from an infection while at home in Ada, Michigan. DeVos founded Amway, the largest direct sale company in the world, with Jay Van Andel and was Grand Rapids’ chief philanthropist.

Before he was a multi-billionaire who had the ear of various presidents and owned the pro-basketball team, the Orlando Magic, he was a Dutch kid growing up in West Michigan. After serving in the United States Air Force during World War II, DeVos attended Calvin College in 1947. His tenure at Calvin was so short – less than a semester – that he never took a yearbook photo. The only mention of him in the 1947 Prism, Calvin’s yearbook, is his name and address in the student directory.

His wife, Helen, graduated from Calvin with a degree in education the same year her future husband dropped out. After spotting her and a friend walking home together, DeVos offered his future wife a ride. This chance encounter soon resulted in a relationship that became a marriage spanning over a half of a century.

DeVos partnered with Van Andel, a friend from Grand Rapids Christian High School, to start a business. The pair and their wives started Amway, the conjunction of “American Way” from a basement. Their business of selling soap door-to-door ballooned into an international affair with more than 20,000 employees.

Instead of pushing DeVos out of Grand Rapids, Amway’s success only further intertwined him and his family with their hometown. The DeVos family has donated to everything in Grand Rapids, from ArtPrize, Grand Valley State University, local start-ups and the Grand Rapids Symphony Orchestra. Numerous buildings bear the DeVos or Amway name. It’s hard to find a sidewalk that Amway hasn’t paved.

DeVos’ support is especially prominent at the Christian institutions in Grand Rapids. DeVos attended LaGrave Christian Reformed Church (CRC) for decades, supporting the preaching, music and architecture there. It was the site of his wife’s funeral and will likely be the site of his. A special Calvin choir, composed of alumni and students, sang at the previous event. It was only one sign out of many of their commitment to Calvin.

DeVos financed student scholarships, contributed towards buildings like the Spoelhof Fieldhouse Complex and the DeVos Communications Center and sponsored programs like the January Series. The family also provided for faculty research and various centers around campus. If there’s no Grand Rapids sidewalk not paved by Amway, there’s no square inch of Calvin not paid by Amway.

DeVos himself spoke at the January Series twice, presenting on keys for success and a compassionate business model. He sent his children and grandchildren to the college of the CRC. Calvin president Michael LeRoy said on his passing, “For decades, Rich and [his late wife] Helen lived out their commitment to Christ by contributing to the flourishing of their neighbors in Grand Rapids. …We are grateful for their longtime support of their alma mater.”

Despite his support, DeVos still had his critics in West Michigan, Calvin and the CRC. Detractors have called the Amway business model a pyramid or Ponzi scheme that created great wealth for those at the top but left little for lower level salespeople. In the 1980s, while Canada was claiming that Amway illegally avoided paying millions of dollars to the country, a Canadian member of the CRC wrote into the Banner, questioning their reasons for publishing a favorable profile of anyone in Amway. Amway ran full page ads in numerous newspapers, including the Grand Rapids Press, that stated they “absolutely did not” cheat Canada out of any taxes.

Around the same time, Calvin’s College Republicans received a large, anonymous, private donation after student senate refused them funding. The Chimes Editorial Board at the time cautioned against receiving any money from DeVos, stating that the Amway founder should be serving prison time for his actions. Although we don’t know for certain that DeVos was the secret donor, it would make sense given his outspoken support for the Republican party.

DeVos not only supported the party itself and its candidates, but also numerous conservative and free market think tanks and organizations, including the Federalist Society, the Acton Institute and the Heritage Foundation. His daughter-in-law Betsy DeVos, another Calvin graduate, is the current Secretary of Education under a Republican presidential administration.

However, some of the fiercest criticism came from the luxurious lifestyle that DeVos lived. The founder stayed in Grand Rapids, a city unlike New York or Los Angeles in that there are no other billionaires around – Devos and Van Andel were the only ones. A Banner profile of him once cheekily opened, “Most Banner readers don’t identify with Richard DeVos. Not many of us have had heart transplants after all.” Readers knew that it wasn’t the procedure that isolated him; DeVos and his large home, fancy cars and foreign vacations stuck out. In one interview, DeVos mentions that members of the CRC “always have too much to say about someone else.”

Additionally, DeVos’ position as a person of faith with a lot of money put him in a unique and often difficult position. This was a frequent topic in his interviews, both with secular and religious media. DeVos once said to a reporter, “I don’t believe success is sinful. I don’t believe that we are biblically admonished to live like bums.”

He liked his large home, fancy cars and foreign vacations, and he would not apologize for it. He continually stressed that the problem was not enjoying these things but rather making those things the chief enjoyment of one’s life. His first commitment was always living within the will of God, but he didn’t believe that it required poverty.

In another interview with the Banner, DeVos softened his tone. The author describes him as feeling a lot of weight from the responsibility of his money. “Wealth allows you to live in great luxury,” he said. “And I do… I’m criticized for living the way I do. Maybe, rightly so. I can’t give sacrificially, you see, even though I give lots away. And I wrestle with that.”

At his passing, Richard DeVos looms large. His legacy of philanthropic giving, of building a billion dollar business and of being a Dutch, CRC kid who made it will likely endure. The charismatic and “perennially tan” entrepreneur opened the door for innovation in West Michigan and for scholarship at Calvin. RIP.