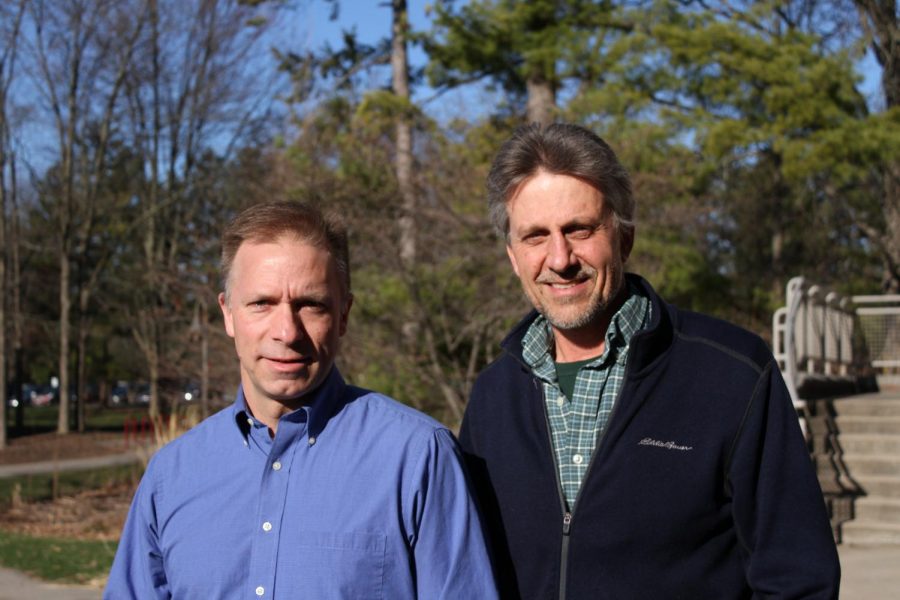 Professors Heun (left) and Warners (right) are planning a seminar for the summer in an effort to change the way Christians think about caring for the planet. Photo by David Fitch.

Engineering professor Matthew Heun and biology professor David Warners are organizing a summer seminar to this end. The seminar, called “Beyond Stewardship,” is set to bring together a dozen academics from different disciplines to discuss a new Reformed understanding of Christians’ relation to the planet and to produce a book featuring chapters written by each.

Their goal is to move thinking beyond what the word “stewardship” implies and the system of thinking that has been built around the term. “Our language holds us hostage and prevents us from being able to see these bigger truths or these other ways of living,” Heun said.

In a document sent to participants, the professors articulate some of their concerns with “stewardship.” They say that it sets up a relationship that marks humans as “separate from creation” and that it also implies God’s absence from the world. The latter concern, Warners said “flies in the face of God’s presence, God’s immanence in the creation. It’s not that stewardship is opposed to that. It just doesn’t bring it up.”

The two professors are also concerned with how the stewardship model often gets entangled in business language and tied up in monetary concerns that “so frequently causes confusion and conflicts.”

In the document, they also say that the current model “has advanced our thinking beyond historical notions of dominion and resource acquisition,” but that they now want to adjust the direction. They especially noted advances made thanks to Loren Wilkinson’s 1980 book, “Earthkeeping, Christian Stewardship of Natural Resources,” which pioneered the stewardship model.

The professors approach issues related to the environment with distinct angles. Heun focuses on energy use and efficiency while Warners studies ecology and watersheds in particular.

Warners said that his thinking for the seminar has emerged from his work with the Plaster Creek Stewards.

Participants in the event next summer will include professors from Duke University, University of Michigan and many from Calvin, including English professor Susan Felch and Gail Heffner, the director for community engagement.

The group will meet for three days in June, after which point, each participant will write a chapter for the book. In August, the group will reconvene to revise. Heun and Warners will write introductory and concluding chapters and eventually publish the book, which they said is intended for use by lay Christians and college students.