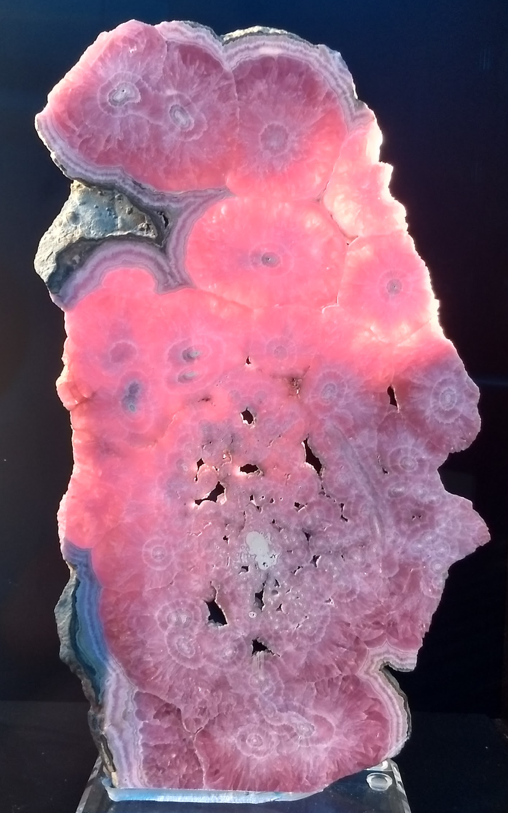 A bright pink, sliced rhodochrosite stalactite from Argentina is on display in the Calvin Bruce Dice Mineralogical Museum. Photo by Melissa Sorrentino.

Rhodochrosite is a mineral known for its cherry red to hot pink crystals, which are generally a few centimeters in size but can be larger. Many of the world’s most valued rhodochrosite specimens were mined in Colorado at Sweet Home Mine, where the largest recorded specimen was found. Originally opened as a silver mine, Sweet Home unintentionally became one of the largest sources of rhodochrosite in the world.

In 1992 a blast to a tunnel produced a small hole through which an abundance of colors were visible. The interior of the hole was lined with clear quartz, blue fluorite, black sphalerite, brasse chalcopyrite and pale yellow calcite, giving the hole the name “Rainbow Pocket.” Inside the Rainbow Pocket were numerous bright red rhodochrosite crystals, one being the largest rhodochrosite ever discovered. The specimen measured 15 cm across and was given the name “Alma King.” It is on permanent display at the Denver Museum of Nature and Science, in Denver, Colorado.

Rhodochrosite is chemically made up of manganese, carbon and oxygen. Finding well-formed crystals in their pure form is rare and those crystals typically have a rose-red color. The manganese can be substituted for other elements, such as calcium, iron, magnesium and zinc, resulting in slight variations of the mineral.  The substitution of calcium gives rhodochrosite its pink appearance.

Rhodochrosite is mainly a collectors’ item. Pure, well-formed, hand-size specimens currently sell for tens of thousands of dollars. Rhodochrosite is not a good choice for rings or bracelets because it has a hardness of only 3.5 to 4, about the same hardness as a copper penny, making it susceptible to abrasion. However, it can be used as earrings, pendants and pins.

Rhodochrosite forms in fractures and cavities of both sedimentary and metamorphic rocks. In metamorphic rocks, rhodochrosite fills fractures by coming out of ascending hot water solutions. Overtime it builds up in layers on the walls of the fractures. Rhodochrosite is found as stalactites in 13th-century Inca silver mines in Argentina.  The crystals began forming from water dripping off manganese-rich rocks inside the mine tunnels and kept growing over the centuries. The stalactites that grew are banded with circular growth layers and are often sliced and polished for collectors, or cut and polished for jewelry.

An example of a light pink stalactite from Argentina with the circular pattern as well as a specimen from Sweet Home Mine can be seen at the Bruce Dice Mineralogical Museum, open every Wednesday, Thursday and Friday from 12:30-4pm. Bookmarks featuring a picture of a rhodochrosite can be picked up at the front desk of the museum.