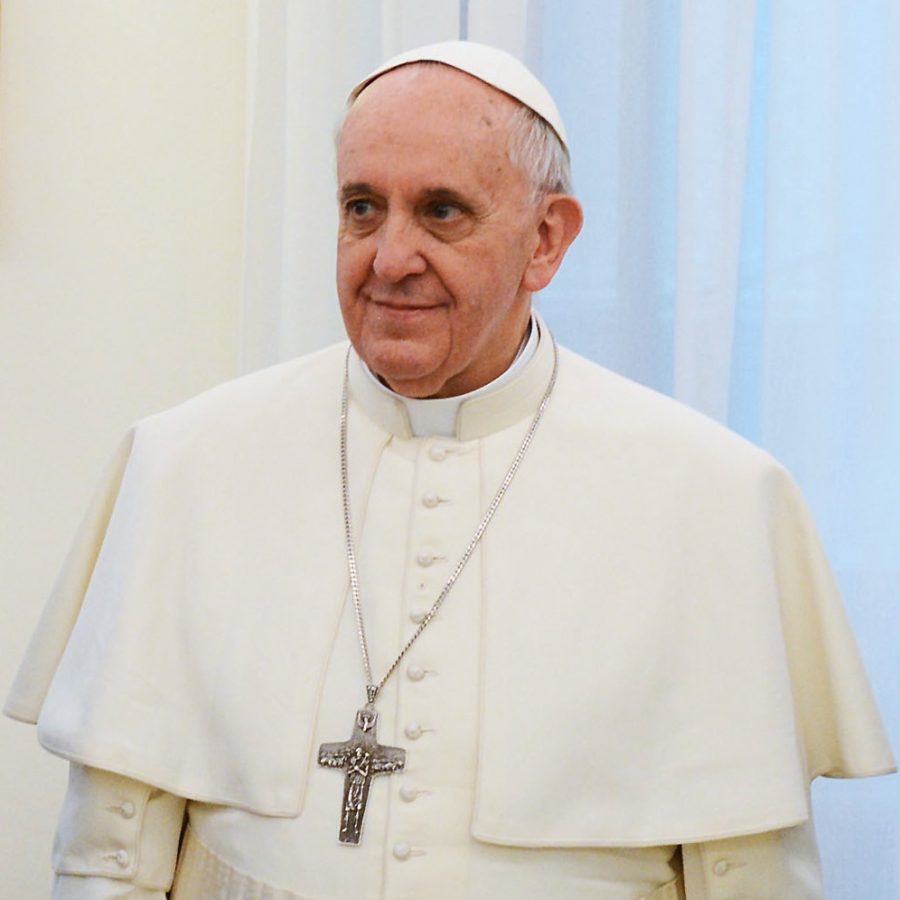 Appointed in March 2013, Pope Francis is the current leader of the Roman Catholic Church, following Pope Benedict XVI and Pope John Paul II. Although some have applauded his inviting nature and skills as a pastor, Pope Francis is critiqued on his perceived lack of concern for doctrine. This year, he is celebrating his fifth year in the office of the papacy, and Catholic scholars are considering his term thus far.

Every pope writes letters called encyclicals to communicate their objectives. Pope Francis has continued this tradition, most notably writing Laudato Si and Amoris Laertius, Latin for a “letter on the environment” and “the joy of love,” respectively. These encyclicals, more like small books in length, come down from the papacy to the bishops of the Roman Catholic church.

Chimes reached out to several professors and chaplains at nearby Aquinas College to hear their thoughts on Pope Francis and his work.

“These letters lay out the teaching mission of the papacy, and have stirred a lot of good conversation on less talked about topics,” said Father Stan Drongowski, the chaplain at Aquinas College.

Supporters of Pope Francis appreciate that “Laudato Si” is the first encyclical on caring for the environment, and that Pope Francis recognizes and agrees with climate scientists’ warnings on our environment. The pope has never taken such a direct stance on environmental health, sparking disagreement with some members of the Catholic Church.

However,  paragraphs 300 to 305 of “Amoris Lauertus” have created controversy among Catholics.

“Pope Francis seems to say that divorced and remarried Catholics can approach the Eucharist even though objectively the couple would be living in adultery, a grave sin,” said Dennis Marshall, a theology professor at Aquinas.

Pope Francis has focused on being pastoral and being a shepherd of the Catholic flock. Pope Francis’ background is unusual for a pope. He was born in Italy but was raised in an Argentinian Jesuit community.

“This is unique because it has been some 300 years since the last Jesuit pope,” said Father Stan. “Pope Francis had a more intense theological formation than recent popes.”

“Many think that Pope Francis’ election symbolizes the Catholic Church’s recognition of Catholicism’s future in the population of Catholics from the global south,” remarked Marshall.

Both Father Stan and Robert Marko, chair of the theology department at Aquinas, shared what they wished their Protestant sisters and brothers would know about the papacy.

“God so loved the world that he did not create a committee, but one came soon after in the church …the pope has the power to say ‘we’ve talked enough, let’s decide,’” Father Stan said. He also clarified the idea of papal infallibility. “Not everything that the pope says is infallible; this is only the case in matters of faith and morals, and only when papal infallibility has been evoked. This has happened twice in the last 150 years.”

Marko commented on how some criticism of the papacy is warranted. He continued to emphasize that “the pope symbolizes unity and leads the college of bishops,” and appreciated “being part of something that goes back 2,000 years.”

He echoed Father Stan in clarifying the teaching power of the papacy.

“Not everything the pope says is from God,” Marko said. “There are limits to what the tradition has said in the Holy Spirit … What he says on a plane does not bear the same weight as in encyclicals.”

An overarching critique of Pope Francis is his tendency to break with tradition. Even Marko, a supporter of the pope, noted that “Pope Francis often shoots from the hip, and goes off the cuff. Sometimes without thinking strictly of doctrine.”

This critique goes beyond some of the more confusing portions of Amoris Lauertus, and into Pope Francis’ remarks on homosexuality. During a press conference in 2013, Pope Francis said, “If someone is gay and he searches for the Lord and has good will, who am I to judge?” This comment created international controversy.

His comments stand in stark contrast to Pope Benedict XVI’s comments on the same topic. In a 2005 document, Benedict wrote that homosexuality was an “objective disorder” and that men with “deep-seated homosexual tendencies” should not become priests.

Without referencing this disagreement specifically, Former pope Benedict XVI has publicly refuted the claim that Pope Francis lacks strong theological formation. In a series of letters to Msgr. Dario Vigano, prefect of the Secretariat for Communications, the previous pope says that “Pope Francis is a man of profound philosophical and theological formation… there is an internal continuity between the two pontificates [papacies].”

If students would like to learn more about Pope Francis or the papacy in general, they can visit the website of the Holy See, or follow him on Twitter. Father Stan also indicated that he would be happy to have continued conversation on this topic and others with Calvin students. He can be reached at [email protected].