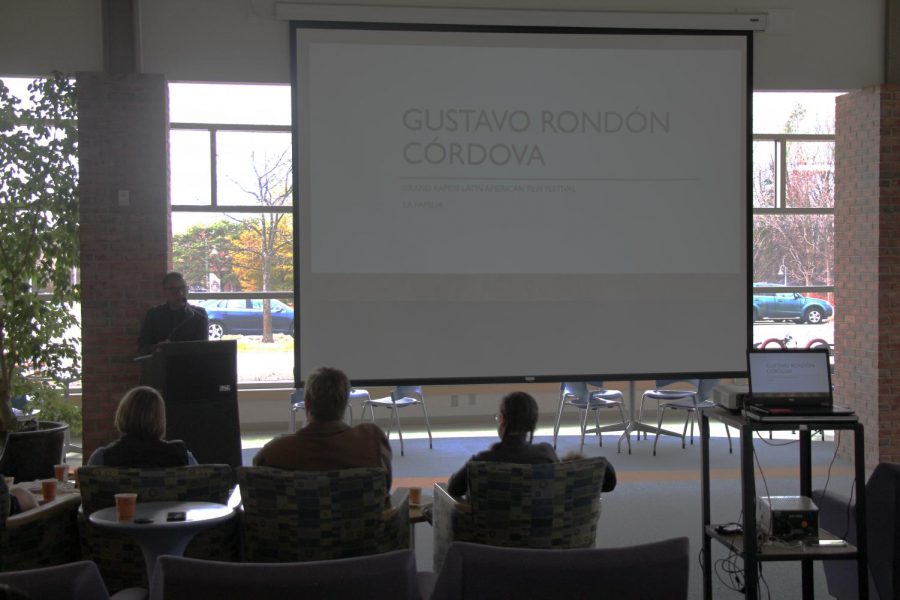 The talk, which took place Saturday morning in the DeVos lobby, was put on by the Latin American Students Association (LASA) and PUENTES.

“La Familia” is the first feature film that Córdova has directed. He has also made a handful of short films, produced other director’s films, edited professional projects and done voice-over narration.

“La Familia” premiered last May in the Cannes Film Festival (which is one of the most highly prestigious film festivals in existence). It was one of the seven films that was picked for the International Critics’ Week segment, out of 1,400 that were submitted. Since Cannes, “La Familia” has also been shown in almost 40 other film festivals.

The story revolves around a distant father and son living in Venezuela. After a violent event forces the two of them to come together, they find themselves slowly reconciling. The subject matter is meant to focus on the difficulty of human connection, while also depicting a realistic way of life for many people living in Venezuela (where Córdova is from).

“My intention wasn’t to make a political film in an explicit way, but there is kind of a political statement by the end,” Córdova said. “It was my intention to say that through a very human and basic story.”

The film is a co-production between Venezuela, Chile and Norway. Five of the producers were from Venezuela, one from Chile and one from Norway. Most of the arthouse films made in Latin America are made in this way, due to the area’s financial system when it comes to filmmaking.

Córdova said he was influenced by filmmakers such as Wim Wenders (“Paris, Texas”), the Dardenne brothers (“La Promesse”), Andrea Arnold (“American Honey”) and more in making “La Familia.” While he does not completely discount Hollywood and big-budget films, he said he is much more interested in independent and realistic cinema.

“I’m not into fantasy. I’m not a great spectator of those kinds of films. I’m all the time trying to see the raw approach [of filmmaking],” Córdova said.

Córdova also touched on the importance of diversity in filmmaking and how he hopes more people will continue to support Latin American filmmaking. He encouraged the audience to come out to the Latin American Film Festival later that afternoon, as the films that were being shown likely won’t be released on Netflix anytime soon.

“Every time you have an opportunity like this, take it. It’s a great support for us. I never expected to be in Grand Rapids, showing my film to 200 or 300 people,” Córdova said. […] “For the Latino community, these are stories that are connected to their origin. That’s very difficult to find in this country.”

“La Familia” was shown on Saturday at the annual Grand Rapids Latin American Film Festival. Other films that were also shown include “Neruda,” “Guaraní” and “El Amparo.”