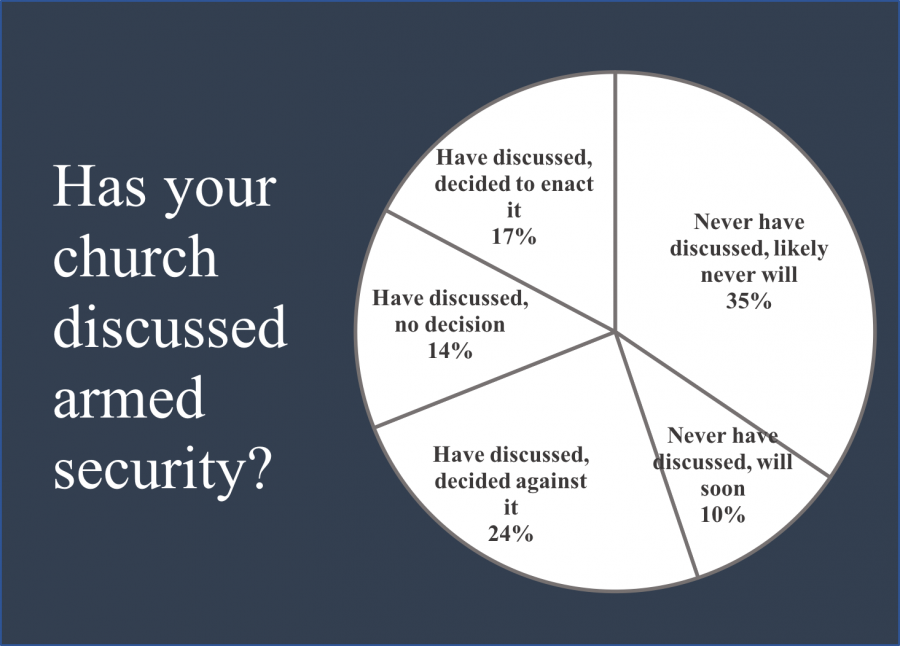 As the national gun control debate rages on, Grand Rapids churches face a pressing question: How do they respond to the threat of a mass shooter attacking their sanctuaries? Already, some states like Maryland and Missouri are considering bills that would allow concealed carry in churches. These actions have prompted protest from some places of worship and sighs of relief from others.

In light of the recent Parkland mass shooting and the Central Michigan University attack, Chimes contacted over 90 local pastors and church offices, asking what their current policy is regarding either hiring armed security or having a congregant concealed carrying. Although Chimes contacted a variety of denominations, Christian Reformed Church (CRC) congregations made up just under half of the respondents, and Reformed-identifying churches made up the majority of its respondents.

The responses reflected the range of responses available. Some churches had never discussed the topic. Many decided against any kind of armed security. Still, a few decided either to hire armed security or ask a congregant to conceal carry.

Of the 29 pastors who responded to the survey, 21 wished to remain anonymous, including all of the pastors with any plans for armed protection.

Reverend Mike Abma is the head pastor of Woodlawn Christian Reformed Church, which meets in Calvin’s chapel for Sunday services. As a result, Woodlawn CRC does fall under the protection of Calvin’s campus safety whose guards are armed but could not ask its congregants to arm themselves as a result of Calvin’s no-weapon policy.

According to Abma, whether the church met on or off Calvin’s campus has no effect on Woodlawn’s stance. They would reject bringing guns into their church regardless. Abma referenced an article by former Marine Anthony Swafford:

“‘The presence of a firearm is always an invitation to violence.’ This was written in response to the idea of arming teachers at schools, but it also applies to arming congregants at churches. It is simply a bad idea,” Abma stated.

Reverend James Kralt of East Paris CRC echoed Abma’s concerns. Both expressed support for banning weapons like the AR-15, which was used in the Parkland attack. However, Kralt differs from Abma in that his council discussed asking a congregant with a concealed carry permit to arm at church because hiring security would not be a feasible financial option for his smaller congregation.

However, Kralt stated that although he respects churches that genuinely feel the need to arm congregants, he resents the fact that his kids need training in school and at church to react in the case of a mass shooting.

“God’s intent for us is to live life — full, rich and vibrant. How can we do this when our kids are scared?” he asked.“Is there any place where they can feel safe?”

Reverend Paul DeVries, pastor of Brookside CRC, also resented this culture of fear but was more open to the idea of gun ownership. The elders and deacons of his church recently finalized several new security measures that did not involve either hiring security or asking a member to arm.

DeVries cited Brookfield’s urban setting, immigrant and returning citizen population and lack of control over congregant gun training as reasons for deciding against it.

“These are frightening times,” DeVries said. “But fear is not a good motivating perspective.”

Reverend Jim Hogg, pastor of Living Hope Community Church, stated that his church has not reached a conclusion on the matter. Like East Paris CRC, his church cannot afford hired security, so Living Hope would have to ask a congregant.

He estimated that roughly eight of his congregants have a concealed carry permit, but like DeVries, his lack of knowledge on their training makes him hesitant to ask them to protect the church. Had one of them been former police or military, he said he would strongly consider talking to them.

Living Hope Community Church has been debating this issue since the Colorado Springs church shooting in 2007. Hogg has a close friend who attended New Life Church, the church affected, at the time of the shooting. As a hunter and pastor to a congregation with many hunters, he sees the mass shooting problem as a moral issue instead of a gun issue and does not want the government to take away firearms.

However, Hogg supports tougher background checks and raising the legal age to own a gun. In this space of uncertainty and conflict, he stresses that the church should focus on Jesus Christ as its primary goal and unifier.

“We’re not sure what to do but pray, preach and teach,” Hogg said.

Pastor A, who interviewed with Chimes anonymously, serves a church that has three congregants who have permission to arm themselves at church. These three are part of a larger security team in the church, the rest are not armed. Pastor A’s church is just under a thousand people.

In order to obtain permission, congregants must have a concealed carry permit from the state of Michigan and ask Pastor A for permission. According to Pastor A, all three congregants have military or police backgrounds. When they do start carrying, they must do so discreetly to avoid making other congregants uncomfortable.

The church’s staff, with input from the congregation, started implementing the plan several months ago. The staff member in charge of security was also present for the interview.

“We say before every meeting that we wish that we didn’t have to do this,” the security coordinator said. “But it’s not enough to believe ‘Not here, not us.’ Time and time again, that isn’t true.”

Pastor A believes that the conversation about armed security is a necessary one that many churches naively avoid.

“This is the real world. Yes, [a church] is a house of worship, but there are also people that need to protected and cared for, and we want to do that in the best way possible,” Pastor A said.

The concealed carry policy is part of this church’s broader theology of caring, which they show in their programs for the elderly and recovering addicts.

Pastor A stated that he understood if people felt uncomfortable about the security measures but that they are necessary. He compared it to locking the childcare facilities during service because of the presence of recovering drug addicts and returning civilians. According to Pastor A, although they may make people feel uncomfortable, these security measures are the best way to care for people by protecting them.

Pastor A echoed the thoughts of other pastors by resenting the contentious climate of the gun control debate, blaming both the far left and the far right.

These pastors face the future of church security with very different approaches, ranging from outright approval or outright opposition of armed protection. Although the majority of councils decided against weapons in their sanctuaries, they did so with varying degrees of certainty. Several still had no response. Easy answers evade churches, without any sign of becoming simpler.