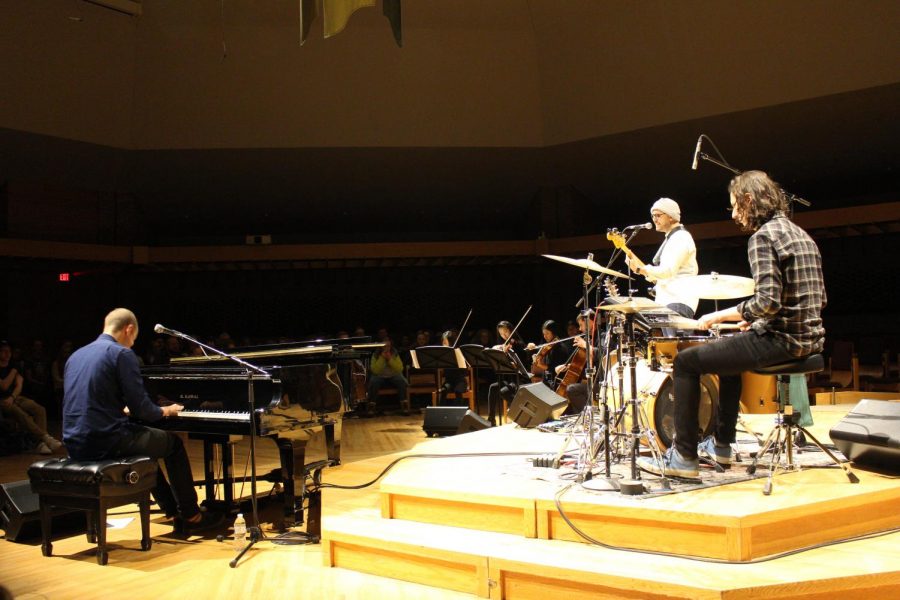 The Brilliance — a worship duo composed of David Gungor (brother to Michael Gungor) and John Arndt — performed a concert in the Chapel on Friday evening. The show was accompanied by a string quartet made up of members of the Calvin Orchestra.

Formed in 2010, The Brilliance originates from Tulsa, Okla., where Gungor used to lead worship services at local a church. After serving time as a youth pastor, he eventually met up with Arndt, who was living in Texas, and they began creating music together.

The show, formally titled “An Evening with The Brilliance,” was sponsored by the Calvin Institute of Christian Worship (CICW), the Student Activities Office (SAO) and the music department.

Before the concert, Gungor had a conversation — lead by Noel Synder of CICW — with his audience, where he discussed both the ups and the downs of songwriting, saying that he’s always careful to select what message his worship songs might bring to the audience.

“From those relational things — and a lot of that is traveling and meeting other people who inspired me — it brought me to a place of going ‘what is the language that I use?’” Gungor said. “And does that language often, even when I’m trying to bring people together, sound hostile?”

The music The Brilliance makes is mostly spiritual, although it differs from most Christian or religious music that is typically played on the radio. That is what made Ken Heffner, director of SAO, interested in bringing them to Calvin.

“What I’m looking for, particularly in the [worship] genre, is artists who are doing something really interesting and robust theologically — that there’s a deep and thick theology as part of it — and also that there’s a really well developed and complex aesthetic,” Heffner said before the show. “To be honest, in my experience most worship music has neither. Some of them have one. The Brilliance has both.”

Gungor addressed personal questions of doubt and confession head-on. The Brilliance’s music is thought-provoking and complicated, sometimes illustrating frustrations the group might have with current world affairs and politics. Gungor calls these songs “protest songs.”

In addition to playing many of their softer laments, The Brilliance also played some of their better-known hits — mostly from their first studio album “Brother,” which was released in 2015. They also played some new music from their latest collection, “All is Not Lost.”

The string quartet that accompanied them was made up of senior Mary Shin on violin, senior Kati Pohler on viola, Ruth Vanden Bos ’17 on violin and Andrew Plaisier ’16 on cello.

“Working with The Brilliance was a cool opportunity,” Pohler said. “They were obviously professional musicians, so it was really fun to collab with them, but that also required a certain level of work on the quartet’s parts since the first time we looked at the music was the day of the concert. Luckily I think we rose to the challenge and played a good concert.”

The Brilliance set a casual mood and often invited the audience to sing along during choruses and shout out song requests and questions. Gungor isn’t shying away from any of the frustrations he may have about religion, but he’s also not giving up either.