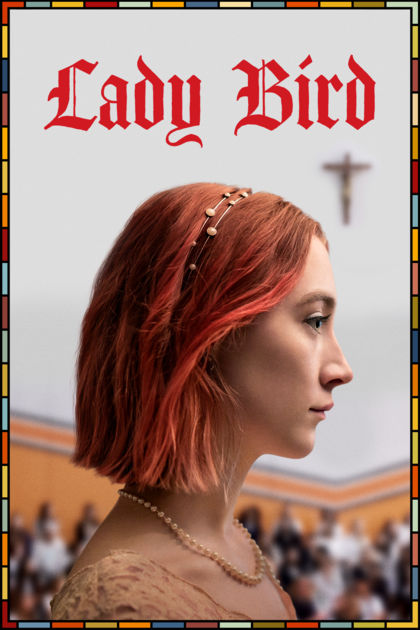 Promotional material for the movie.

One of the films nominated for best picture at the Academy Awards this year, “Lady Bird,” was screened in the CFAC on Thursday, March 1 by the student activities office.

“Lady Bird” is directed by Greta Gerwig — an indie actress who starred in films such as “Frances Ha” and “20th Century Women” and is now making her directorial debut. The film stars Saoirse Ronan, Laurie Metcalf, Tracy Letts, Lucas Hedges and Timothée Chalamet.

Taking place in Sacramento, California in 2002, “Lady Bird” is a coming-of-age story that revolves around a girl named Christine (Ronan). Christine is the name that her parents gave her, that is, but lately Christine has been trying to find her own identity. So, she decided to give herself a different title: Lady Bird.

Lady Bird is in the middle of her senior year at a Catholic High School (which she hates), as she tries to survive the challenges and social pressures that 17-year-old girls face. Accompanied by her life-long friend Julie (Beanie Feldstein, aka Jonah Hill’s younger sister), Lady Bird finds herself attracted to a wide variety of different guys, thus joining in on random actives such as the fall musical or “parking lot” hangouts to try and get closer with them.

Then there is Lady Bird’s difficult family situation. She and her mother, Marion (Metcalf), don’t always get along the best, because, as her father says, they “both have such strong personalities.” On top of that, each member of the family responds differently to their lack of money: Lady Bird is frustrated she might not have the funds to attend a liberal arts school on the East Coast; which is her dream due to its extreme distance from Sacramento.

“Lady Bird” is not entirely factually accurate, but it’s a semi-autobiographical story based on Gerwig’s teenage years. She gave the cast and crew her old yearbook photos and journals, and took them on a tour of Sacramento in order to prepare for this film. The first draft of “Lady Bird” (Gerwig also wrote the script), entitled “Mothers and Daughters” at the time, was over 350 pages long, full of all the memories she had when growing up.

Gerwig turns “Lady Bird” into a personal story with close attention to detail, as one of Lady Bird’s teachers tells her:“Don’t you think maybe they are the same thing? Love and attention?” The story she creates is relatable, albeit painfully embarrassing.

“I just don’t feel like I’ve seen very many movies about 17-year-old girls where the question is not, ‘Will she find the right guy’ or ‘Will he find her?’” Gerwig said in an interview with Rolling Stone. “The question should be: ‘Is she going to occupy her personhood?’ Because I think we’re very unused to seeing female characters, particularly young female characters, as people.”

In telling the story in this way, Gerwig creates each of her characters as three-dimensional people. Everyone, even the unlikable Timothée Chalamet or the stuck-up popular girls, is fighting their own battles and has their own moments of sympathy. Lady Bird herself is often misguided in some of the choices she make, as is her mother. This is not a story of triumph or tragedy, but of self-discovery and inner-growth.

“Lady Bird is important for so many reasons, but as a woman who loves film and dreams of making them, Greta Gerwig’s achievement as a first time director for a film largely about a young woman is still mind-blowing,” said alumna Hailey Jansson ‘17. “Shot entirely on tracks or tripods, there’s no fancy movement or trick of the camera.

Greta presents a young woman coming-of-age as naturally as it would happen before your eyes and makes you feel as though you were the one coming-of-age the whole time.”

With an ending that has potential to make you tear up, “Lady Bird” finds a way to bring a new spin to the coming-of-age film — a task one might have thought impossible, as the genre has been done hundreds of times in the past.