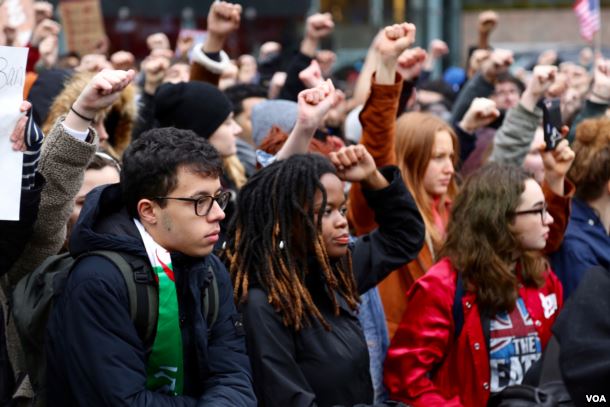 At 10 a.m. on March 14, students across the country will hold a walkout for 17 minutes to commemorate the lives of the seventeen people who were killed in Parkland, Fl. on Feb. 14. While some high schools are threatening consequences for students who walkout, hundreds of colleges and universities have clarified that these consequences would not be a barrier to admission.

Women’s March Youth Empower is the group behind the National School Walkout, which they say is to stand with the victims of gun violence.

Randy Morris, principal of Grand Rapids Christian High School (GRCHS), sent an email to the parents of his students in which he also voiced his support of the walkout.

“We are just beginning our planning with students and staff, but our focus is to spend our 17 minutes, out of the classrooms, gather as a school community to talk and pray!”

While GRCHS is supportive of the walkout, some high schools around the country have promised penalties for participation in the non-violent protest. According to BuzzFeed, a Texas school district threatened any student who participates in the walkout with a three-day suspension.

These sorts of threats have prompted hundreds of colleges and universities to made statements that they will not penalize applicants who were suspended from a high school for involvement in a protest. The list of schools includes Yale and Harvard, Albion and Alma.

Wheaton College admissions sent out a tweet on Feb. 23 saying: “Should your school discipline you for exercising your right to free speech, it will not be held against you @Wheaton.  #ParklandStudentsSpeak.”

For prospective Calvin students who are concerned that the consequences of their political involvement in high school will affect their admission to Calvin, director of admissions Ben Arendt says that should not be a problem.

The question on the Calvin application that asks if the applicant was ever suspended from a high school is intended to open dialogue instead of closing it, according to Arendt. He said that if the prospective student marks yes, that is not an automatic barrier, “but it will activate a further step in their process.”

Assuming the applicant meets all other qualifications, the committee on admissions will work through student life to follow up on the reasons for the suspension, including contacting the high school, says Arendt.

Once they better understand the situation, they would work together with the dean for judicial affairs in the office of student conduct to create a plan for accountability. Depending on the offense, Arendt says a unique plan would be created “to help create a pathway” for the student to attend Calvin.