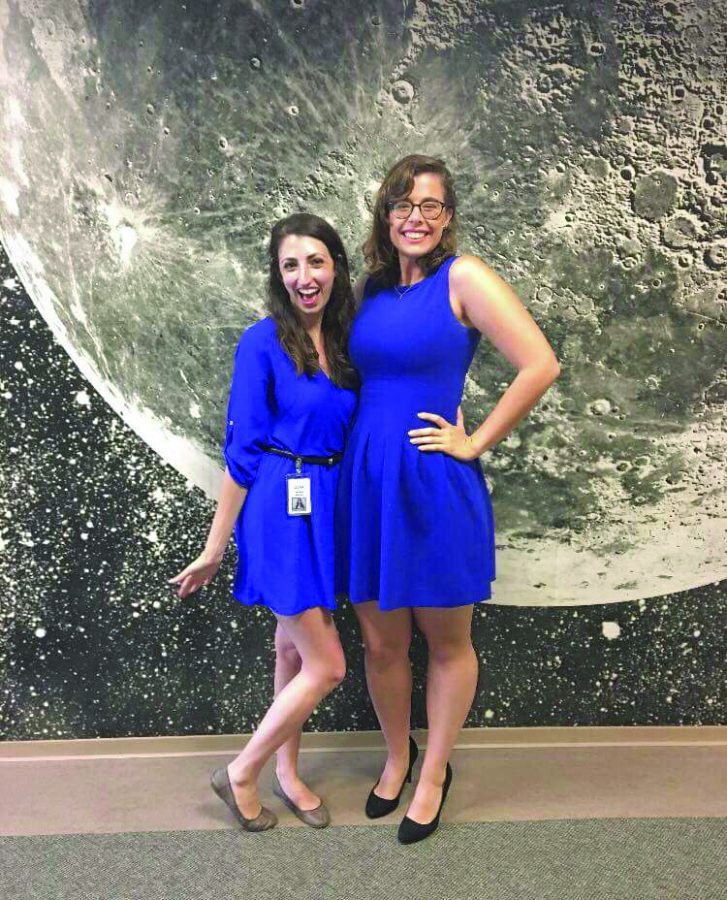 Precisely one spring break ago, Maia Madrid, a senior studying geology, found herself inside a candy-striped Chick-Fil-A, reading a rejection email from NASA’s Lunar Planetary Science Institute (LPI), striving to stifle her tears.

Fast forward a year later, and she now has polar opposite spring break plans, as she is preparing to head down to the very place that rejected her in order to present her summer research at the 49th Lunar and Planetary Science Conference.

“It’s wild that all this happened in a year,” Maia said, “but that’s pretty cool. I’m pretty into it.”

The jump in plans between this spring break and last may seem astronomical, but it’s very much in line with the twists that exist in Madrid’s life. One year ago Madrid may have laughed if someone told her she would someday work for NASA, but two years prior to that, Madrid would never have even considered geology.

Undecided until sophomore year, Madrid was stuck in a black hole of countless decisions. While she tested out various options, a friend and fellow floor member, Daniel Blakemore, continued to suggest geology as a choice of study.

“I had joked with her for a year that she should stop education and take geology,” Blakemore recalls. “I don’t know when the joking line actually became serious, but she signed up for Geology 151 for her sophomore fall semester and ended up really liking it.”

Madrid, however, remembers being more hesitant, giving three reasons she would never be a geologist:

And finally, “Rocks are dumb.”

Still, Blakemore persisted and eventually convinced her to take an introductory geology class. Mid-way through that semester, he received a text along the lines of, “Say, hypothetically, I wanted to look into being a geologist. What should I do?” Looking back, he considers it to be one of his proudest moments.

Though Blakemore introduced Madrid to her first geology class, her career path solidified when Madrid realized the unique avenue that geology provided into a long-time passion: outer space.

“I liked exploring, and I felt like everything else had been explored; there was nothing new under the sun,” These thoughts led Madrid to wonder, “Why not go out of the sun?” Ever since, she’s held a deep fascination for things beyond Earth’s atmosphere.

This love continued into college, where Madrid could be spotted sporting her plethora of NASA sweatshirts, constellation-patterned dresses and other space-centered clothing.

Still, Madrid never saw herself actually doing anything with space, certain that her difficulties in math would bar her from any space-related career. Known for her spicy political opinions, her quick retorts and her dramatic flair, Madrid felt her interests suited her for a non-STEM career path, one centered on discourse and writing, rather than facts and figures.

And yet, nothing seemed to quite fit.

Even after declaring geology as her official major with the hopes of planetary geology, Madrid never had that moment where she felt the planets aligned and all was right.

Instead, she spent her first year as a geology major wondering if she made the right decision. Madrid admits,

“There were definitely times where I was concerned that I wasn’t science-y enough to be a geology major or didn’t have the logic-minded brain.” However, passionate professors with faith and confidence in her abilities helped talk her through these feelings of inadequacy.

These strong professor-student relationships ultimately led Madrid to apply for NASA’s LPI internship, recommended to her by her advisor, professor Ralph Stearley. After some initial hesitation, Madrid applied, without expecting too much in response. The application process was simple; a resume and some recommendations. The first time she heard anything from them was the rejection email she read at Chick-Fil-A.

“I wasn’t shocked when I didn’t get it,” Madrid said. “I think it reinforced a lot of the insecurities that I had at the time about geology and about my career choice as a whole.”

Despite the setback, Madrid eventually bounced back and began to make preparations to spend the summer working in Grand Rapids.

All those plans changed in May when she received an email from Dr. Julie Stopar, a scientist at LPI, asking if she’d be willing to drive down to Texas to help research the ages of basalt on the moon. Knowing that this position was once in a lifetime, she dropped her summer plans and began to pack for her summer in The Woodlands, Texas.

Blakemore had the opportunity to be with her in that moment, remembering it as “the most excited” he had ever seen her. Madrid cried once again, but this time, for a very different reason.

Madrid spent the summer alongside 14 other interns, each assigned to a different project on lunar and planetary science. Even after the summer ended, Madrid continued her research under Dr. Stopar, which she plans to present this upcoming spring break.

In looking back on this opportunity, Madrid admits, “I never thought I’d do anything space- or science-related, and here I am today with an internship that’s continuing and possibilities for grad school.”

This upcoming conference represents yet another accomplishment Madrid can add to her resume.

However, the internship and conference provide more than an achievement or a fun fact to tell people. It’s a reminder for both her and others that paths are never clear-cut. It’s the culmination of a thousand tiny decisions: meeting Blakemore, switching majors, making connections with professors and putting herself out there.

Madrid urges other students to go for it when considering changing their majors or applying for opportunities that seem impossible to achieve.

“I truly believe if you put your mind to something and put in the work, you can be successful in whatever you choose.”

Although Madrid will be the first to admit how scary it can be to follow dreams that seem too big, her success shows that it’s possible to reach the dreams you seek — even when your dreams are as far as the moon itself.