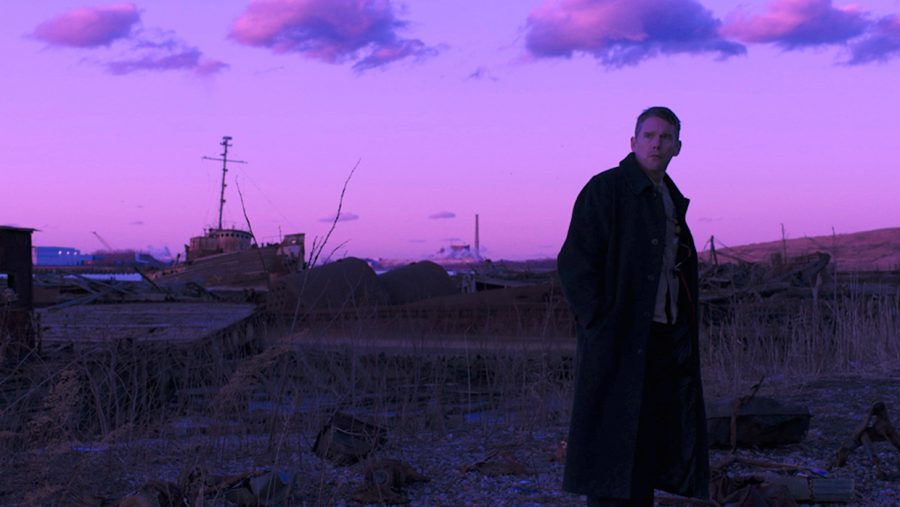 Filmmaker, Calvin alumnus and former Chimes editor Paul Schrader returned to his Reformed roots for the subject matter his new film, “First Reformed,” and to his alma mater’s campus to talk about it.

After graduating from Calvin in 1968, Schrader attended UCLA. He began to acquire a reputation as a boundary pusher. Like his portrayal of religion in “First Reformed,” Schrader’s relationship with the Reformed mindset is complex.

On Tuesday, Feb. 20, community members, students, faculty (some of whom taught Schrader during his time at Calvin) and staff filled Calvin’s Recital Hall to hear Schrader give a lecture reflecting on his work in the transcendental style, followed by a panel response. The lecture and the screening the previous night were sponsored by the Loeks Visiting Film Artist series.

Schrader began his talk by explaining that he “transferred [his] interest in theology to a love of film.” He noted that when he began his filmmaking career, the CRC was very restrictive of film.

“I got out of it the same way a bullet gets out of a gun. You had to have a lot of propulsive force or else you get caught in Kalamazoo and they pull you back.”

David Hoekema, a professor of philosophy at Calvin, described Schrader’s relationship with the college shortly after his graduation:

“After relocating to Los Angeles he gave help and encouragement to Calvin students and graduates interested in film, even while he regarded the college as hopelessly backward and out of touch with the contemporary political and cultural world.”

“Theological and philosophical ideas are taken seriously, not dismissed or scorned, in a way that leaves you pondering difficult questions,” says Hoekema. “This is a very different Paul Schrader from the one who railed against every aspect of his upbringing a decade or two ago.”

In his talk, Schrader spoke on the ideas detailed in his book “Transcendental Style in Film,” published in 1972, and how his thoughts have changed and developed since. (A new edition of this book will be published in May by the University of California Press.)

Schrader explained that transcendental style is inherently spiritual and his discovery of it was an outflow of his search for a connection between the spiritual ideas of his past with the “profane” culture of Hollywood.

Transcendental style is a methodology of effects, extremely long takes, expressionless acting and delayed cuts. All of these effects slow the viewer down, working against the appetite for action and emotion fed by mainstream Hollywood media. Schrader describes this as a form of “meditation,” and thus spiritual.

“And there is no such thing as fast meditation,” Schrader continued. “Spirituality is about the how, not the what. The form reveals the content.”

This is very different from “faith-based films” which he calls “Hollywood tricks in God’s name.” These films still operate on emotion and action.

But Schrader does not intend for transcendental films to be art films. “They are for audiences,” he says, “small audiences, but audiences nonetheless.”

The audience who attended the event expressed a variety of responses. Professor emeritus Roy Anker, Nicholas Wolterstorff and Garrett Strpko, a sophomore studying film and media composed the responding panel.

Strpko, in his response, wondered about the accessibility of transcendental style.

“I think that First Reformed is likely an accessible movie to those who come from a film background or perhaps a Christian background, but perhaps less so for other viewers.”

However, he admires the film.

“I do think the style serves its purpose well and can’t see the film being much of anything had it been made without the transcendental style in mind.”

Sam Tuit, a first-year student interested in majoring in digital communication attended both the screening of “First Reformed” on Feb. 19 and the lecture the following night. He explained that listening to the discussion helped him understand the film.

“Coming out of the film I just felt like it was super weird and then hearing them explain … I realized that the transcendental style was what they were going for and it made it feel less weird.”

While Tuit thinks the film is well made, he feels he needs to continue working out the meaning of the symbolism.

“It feels like a parable and I need someone to explain it to me,” he said.

He added: “I don’t know that I like how it portrayed the church because it’s like ‘the church is dying and being controlled by corporations.’ I wasn’t super gung-ho about that.”

Schrader, though, does not present himself or his work as against the church or Calvin.

“I have no negative feelings about Calvin,” he said “She is the alma mater who made me who I am. I was fortunate to attend Calvin during a period of turmoil, since that brought out both the best and worst in students, faculty and administration. It was a defining moment and I was defined.”