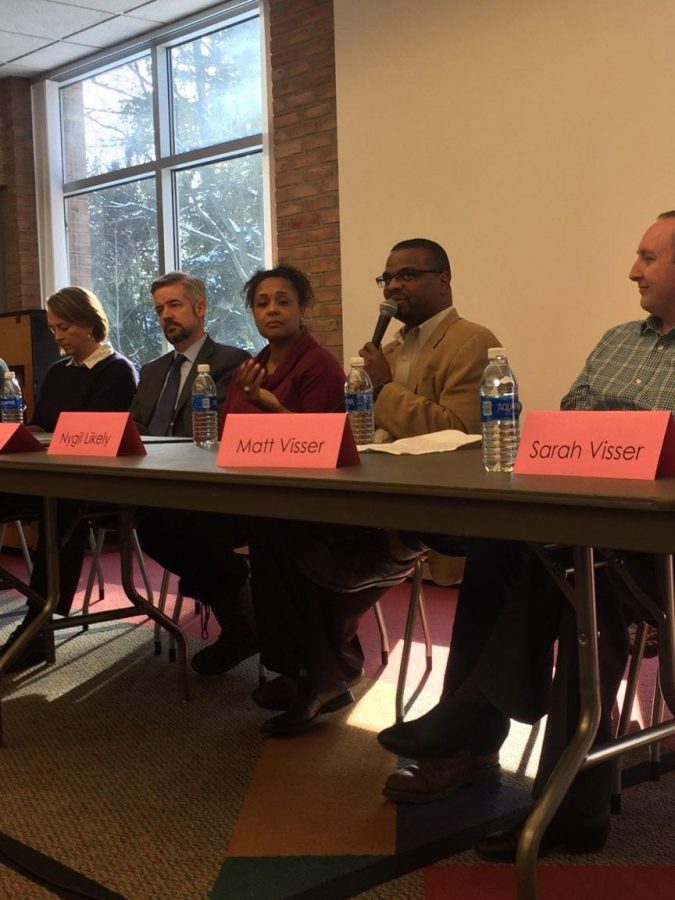 Four notable Calvin College couples sat on a panel to discuss their journey to finding a healthy balance between career and relationships. Each couple had a different story to tell, but all had two key elements in common: faith in God and an egalitarian view of gender roles.

“Our goal is always to go to prayer,” said Nygil Likely, director of pre-college programs. He and Kieychia Likely, Calvin’s intercultural student development coordinator,  define faith as central to  every stage of their relationship.  After many twists and turns, such as spending five years long distance, adopting their nephews after an unexpected death and planting a church, the Likelys learned that, for their marriage to succeed, God had to be at the core of it.

In addition to having God at the center, each couple on the panel expressed a call to sacrificial love. David Wilstermann described this process as a type of leapfrog.

In sharing the burden, each couple reflected on times in the past where it was necessary to sacrifice certain desires for the overall benefit of the relationship. For the Likelys, they sacrificed physical proximity to each other so Kieychia could fulfill her dream of college. For the Le Roys, President Le Roy sacrificed an opportunity out of deference to Andrea’s request to turn it down.

Despite sacrificing some things, there were no panel members who felt that they were constantly pressured into sacrificing their hopes for the dreams of the other.

As a woman in leadership, Sarah Visser, vice president for student life, admitted that she previously struggled with juggling the various roles in her life — as a wife, a mother, a career woman, a daughter and a child of God. But she chafed at the idea of complete balance, favoring living fully as a whole member, rather than fractured into multiple selves.

“My hope,” Visser stated, “is that I never sacrifice the many roles I’ve been called to for just one thing.”

This concept of wholeness-of-self ties into recognizing strengths and weaknesses and defies preconceived notions of gender roles. Kieychia recalls her struggle with societal expectations.

“I thought that when I got married this magical thing was going to drop into my spirit and I was going to be the perfect wife that could cook, do laundry, keep the house clean all the time. I found out, quickly, laundry is not my thing.”

Instead of doing the laundry, she and Nygil worked together to shuffle jobs according to the individual, rather than according to preconceived notions about gender. Now, Nygil does the laundry and their clothing retention rate is much higher.

The Le Roys also shifted away from gendered expectations in terms of child rearing. During his years as a professor, President Le Roy taught night classes to spend time with his children during the day since his wife could not. He said this decision positively affected both his relationship with his kids and Andrea.